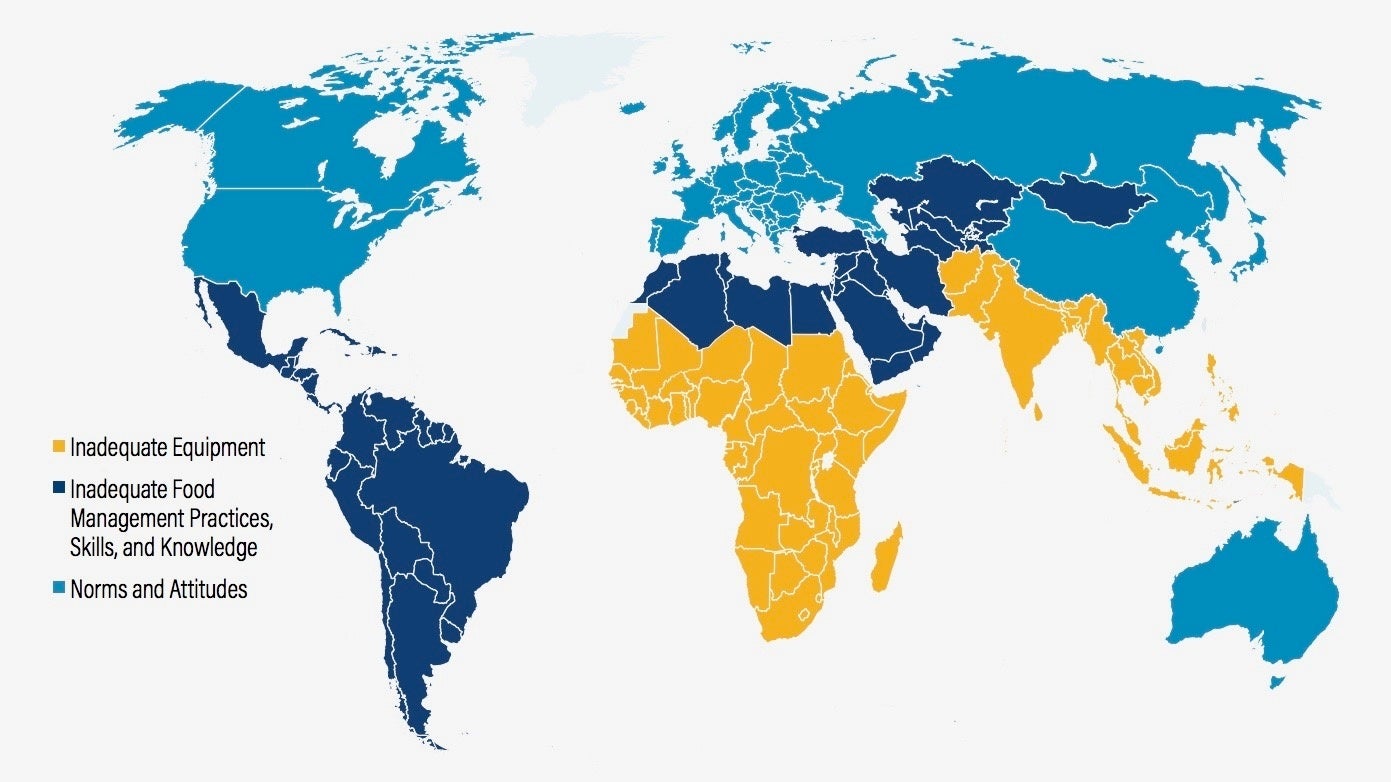 This map highlights by geographic region the leading underlying driver of food loss and waste. WRI analysis based on FAO (2011) and HLPE (2014)

The UN set a global goal to cut food loss and waste in half by 2030. Alarming figures show just how big of a challenge remains.

Nearly a third of all food produced in the world goes uneaten each year — an amount that costs the global economy $940 billion and emits 8 percent of planet-warming greenhouse gases. At the same time, 1 in 9 people is undernourished.

A massive challenge requires massive action. A new report by the World Resources Institute‚ and produced with support from The Rockefeller Foundation, and in partnership with United Nations Environment, Natural Resources Defense Council, Iowa State University, The University of Maryland’s Ed Snider Center, The Consortium for Innovation in Postharvest Loss and Food Waste Reduction, Wageningen University and Research, and WRAP — lays out a Global Action Agenda to overcome the world’s food loss and waste problem.

Simply put, this Global Action Agenda calls on governments, companies, farmers, consumers, and everyone in between to play their role in a three-pronged approach:

To accelerate momentum, here are 10 interventions that can rapidly spur deployment of a Target Measure Act approach and actor-specific actions.

Reducing food loss and waste requires action across the entire food supply chain as well as supportive public policies. No single institution can drive a 50% economy-wide reduction on its own. Public-private partnerships have an emerging track record, having launched in countries like the Netherlands, United Kingdom and United States. In the UK, the Courtauld Commitment has been signed by 53 retailers, who have committed to measure and reduce food waste. If such partnerships emerged in the following countries, then 20 of the world’s largest agriculture exporters would be covered, representing 45 percent of the world’s population: Argentina, Belgium, Brazil, China, France, India, Italy, Malaysia, Mexico, New Zealand, Poland, Thailand and Turkey. 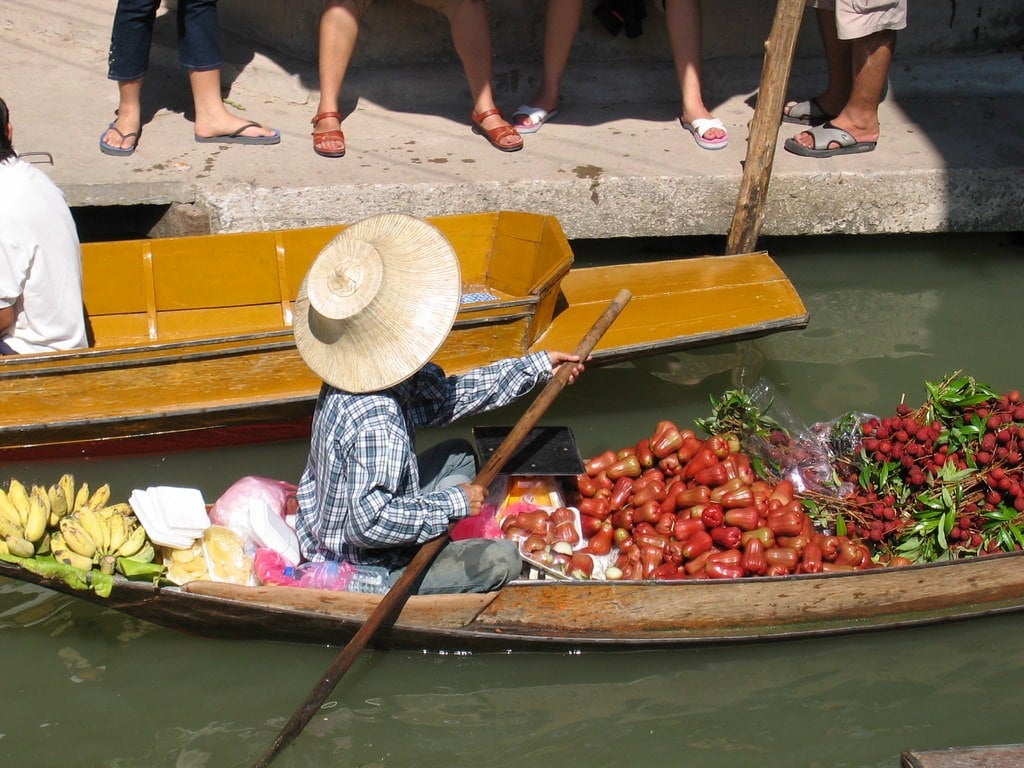 Food losses often occur during production and, especially in low-income countries, during handling and storage. Launching a private sector campaign where at least 10 of the largest food and agriculture companies commit to act and engage their 20 largest suppliers to do the same by 2030 (hence, 10x20x30) could have a big impact. This approach leverages the relative market concentration and power of a few companies to catalyze change across the supply chain and geographies. This intervention follows a model set by retail-giant Tesco, which has secured the commitment of 27 of its major suppliers to set targets, measure progress and act.

If we’re to halve food losses, efforts to assist smallholders with productivity and efficiency need a big boost—especially in reaching smallholders in sub-Saharan Africa and South Asia, regions that lose an estimated 26% of their food during harvesting, handling and storage. Approaches include training farmers in reducing losses, creating access to markets for smallholders and improving storage solutions. For example, as part of The Rockefeller Foundation’s YieldWise initiative, farmers growing tomatoes in Nigeria were trained in improved agronomic practices and access to aggregation centers, which reduced transport time to market. Following these interventions, losses were reduced by 54%.

5. Launch a “decade of storage solutions.”

What if the 2020s became a decade of making food storage technologies ubiquitous, affordable and climate-friendly? Doing so would tackle a huge hotspot of food loss and waste in low-income countries, helping ensure more food makes it safely to market. Innovations in solar-powered coolers and “lease-to-own” financing arrangements for villages can help.

Behavioral science tells us that increased knowledge of an issue alone does not necessarily translate into changed behavior. What successful initiatives like the UK’s ‘Love Food, Hate Waste’ campaign have shown is that you must give people information and make it easy for them to change their behavior. That’s why ‘Love Food, Hate Waste’ ran advertisements to raise awareness and worked with retailers to get rid of offers such as ‘buy one get one free’ that encourage over-buying as well as to print food storage information on food packaging, making it easier for people to waste less food. What’s needed is for norms in high-income countries and cities everywhere to shift so that wasting food becomes unacceptable.

Many of the promising solutions to reduce food loss and waste need an influx in financing to take off. In 2016, The Rockefeller Foundation launched the 0 million YieldWise initiative to tackle food losses in Kenya, Nigeria and Tanzania, and food waste in North America and Europe. In 2019, the World Bank launched a 0 million Sustainable Development Bond focused on food loss and waste reduction. More of such investments are needed by a wider suite of financiers, ranging from grants and blended finance to venture capital and commercial investments.

Without more and better data to understand the scale and scope of the food loss and waste challenge, we risk not being able to identify hotspots, hone reduction strategies and monitor progress. Over the next five years, the world needs a concentrated push to measure the quantity of food loss and waste in a more consistent way so that data is comparable.

Public and private research institutions have an important role, helping answer questions that will allow the world to refine strategies for reducing food loss and waste. These are questions like: Which solutions are showing the best return on investment? What technologies are most promising? What can behavioral science tell us about how to shift social norms when it comes to food waste? And what types of infrastructure do farmers in low-income countries need to reduce on-farm and near-farm losses?

There Are Enormous Benefits to Reducing Food Loss and Waste

Successfully halving food loss and waste would bring enormous benefits. It would close the gap between food needed in 2050 and food available in 2010 by more than 20 percent. It would avoid the need to convert an area the size of Argentina into agricultural land. And it would lower greenhouse gas emissions by 1.5 gigatons per year by 2050, an amount more than the current energy and industry related emissions of Japan.

The size of the prize is huge. So, too, must be the action to seize it.