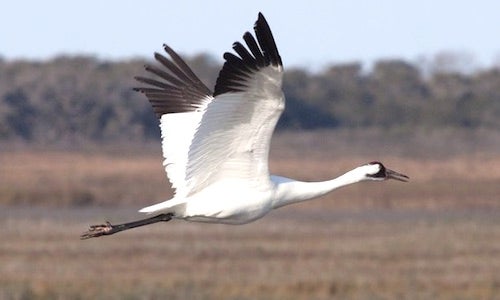 The U.S. Environmental Protection Agency (EPA) has released its first-ever analysis on the effects of three common pesticides—chlorpyrifos, diazinon and malathion—on endangered and threatened species and designated critical habitat nationwide. The resounding conclusion? Pesticides are terrible for them.

According to the report, malathion and chlorpyrifos harms an astounding 97 percent of the 1,782 animals and plants protected under the Endangered Species Act. Diazinon harms 79 percent.

Malathion is often used on fruit, vegetables and plants for pests, as well tick removal on pets. Chlorpyrifos is used to exterminate termites, mosquitoes and roundworms. Diazinon is used against cockroaches and ants.

The three chemicals species are “likely to adversely affect” these species, the EPA found.

“For the first time in history, we finally have data showing just how catastrophically bad these pesticides are for endangered species—from birds and frogs to fish and plants,” Lori Ann Burd, environmental health director at the Center for Biological Diversity, said in a statement. “These dangerous pesticides have been used without proper analysis for decades, and now’s the time to take this new information and create common-sense measures to protect plants, animals and people from these chemicals.”

“The EPA has allowed chemical companies to register more than 16,000 pesticides without properly considering their impacts. That has to stop,” Burd said. “These evaluations are a huge step forward for the EPA. Now that we know the magnitude of danger these pesticides pose, it’s clear we need to take action. The EPA must move forward with analyses for other dangerous pesticides and also quickly implement on-the-ground efforts to prevent the extinction of rare and unique wildlife from these pesticides.”

Organophosphates aren’t just bad for wildlife, a number of studies have linked them to human health risks. According to the Center for Biological Diversity:

Organophosphates are widely used in agriculture on crops such as corn, cotton, watermelon and wheat. A recent study at the University of California at Berkeley found that an astonishing 87 percent of umbilical-cord blood samples tested had detectable levels of an organophosphate. Early childhood exposure to organophosphates has been linked to cognitive delay and attention deficit hyperactivity disorder, or ADHD. Organophosphates were also used as nerve agents in chemical warfare and have been linked to Gulf War syndrome, which causes fatigue, headaches, skin problems and breathing disorders.

Additionally, the World Health Organization’s International Agency for Research on Cancer also said last March that malathion and diazinon are classified as “probably carcinogenic to humans.”

The Center for Biological Diversity, as well as a number of farmworker, child-safety and environmental advocacy groups, sent a letter to the EPA last month urging it to ban several organophosphate pesticides that are currently under review.

“These pesticides pose unacceptably high risks to children, workers and wildlife, and really can’t be used safely,” Nathan Donley, a scientist with the Center for Biological Diversity, said in a statement. “In this letter farmworkers, child-safety and consumer advocates have spoken with one voice, asking the EPA to ban these relics of our toxic past.”

The EPA has released the analysis for public comment. Following the comment period, the EPA will finalize the assessment. The U.S. Fish and Wildlife Service and National Marine Fisheries Service will use the analyses and data from the biological evaluations in their final “Biological Opinions” for each of the three chemicals, the EPA said.