9 Reasons Why You Should Not Fear Healthy Carbs 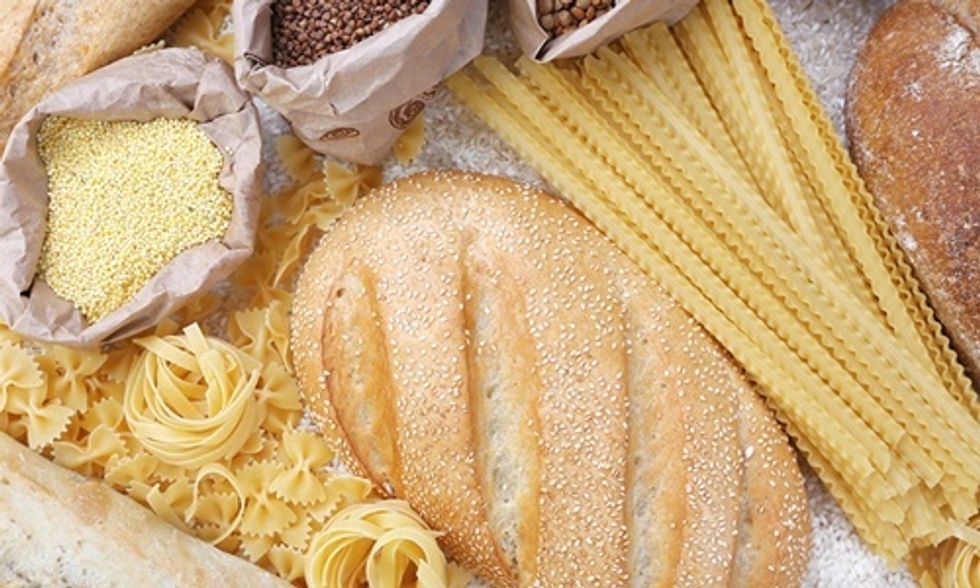 Carbs: to eat or not to eat?

This is one of the most hotly debated topics in the field of nutrition.

Just as fat used to be, carbs are now accused of causing weight gain, heart disease and all sorts of other problems.

It is true that low-carb diets can be incredibly beneficial, especially for weight loss, diabetes and certain health conditions.
Photo credit: Shutterstock

It is true that low-carb diets can be incredibly beneficial, especially for weight loss, diabetes and certain health conditions (1, 2).

It is also true that most junk foods tend to have carbs (mostly refined) in them.

However, not all carb sources are created equal. Refined carbs can be harmful, but whole food sources of carbs are very healthy.

In fact, many of the world's healthiest foods have plenty of carbs in them.

Here are nine reasons why you don't need to fear all carbs.

1. Carbs are Not Inherently Fattening

Some sources blame carbs for obesity, because they raise insulin levels.

They claim that carbs are the primary cause of obesity due to their effects on insulin and fat storage. In other words, that carbs are uniquely fattening, regardless of total calories.

The truth is, scientific evidence overwhelmingly rejects this hypothesis.

This argument is also at odds with indigenous groups like the Massas, Kitavans and Tarahumara Indians, as well as the pre-industrialized Thai, Taiwanese and the rest of Asia during the 20th century. These groups thrived on high-carb diets (3, 4, 5, 6, 7).

If carbs are fattening and harmful on their own, then these populations should not have been in good health with lean bodies.

Bottom Line: Many populations have thrived eating high-carb diets and remained in excellent health. This indicates that “carbs" per se are not inherently fattening.

Learning to cook was a game-changer for our early ancestors. Cooked meat provided increased protein, fat and calories.

But a flurry of new evidence indicates that carb-rich foods like root vegetables, legumes and even grains were cooked and consumed by our ancestors too. This is important, since cooking these foods makes many of them safer to eat (8).

This theory is supported by emerging biological evidence that shows early humans began developing extra copies of the amylase gene, which helps produce the enzymes you need to digest starchy carbs (9).

By analyzing bone DNA, researchers can see that early humans in Europe had developed extra copies of the amalyse gene long before they started farming.

That's why people today can have up to 18 amalyse gene copies, indicating that we have evolved to be able to digest starches more efficiently.

Also consider that every single cell in your body runs on glucose, which is a carbohydrate sugar. Even the most fat-adapted brain requires, at the very least, 20 percent of its energy from carbs (10).

Bottom Line: Humans ate high-carb foods long before they started farming. This is supported by genetics and archaeological evidence.

Gluten is a protein found in wheat, barley and other grains. By cutting carbs from your diet, you automatically cut out gluten too.

A gluten-free diet is necessary for the small number of patients with celiac disease and (potentially) some other types of autoimmune disease.

But, even if we group all these conditions together, the scientific literature indicates that between 87–99 percent of people should have zero problems digesting gluten. What's more, the weight of the evidence leans towards the 99 percent (11, 12, 13).

The latest clinical trial even found that only three out of 59 participants with self-reported gluten sensitivity actually reacted to gluten (14).

Yet, despite how few people are actually proven to benefit from a gluten-free diet, 30 percent of people want to eat less gluten and 18 percent already buy or eat gluten-free products.

Although foods that are naturally gluten-free can be healthy, processed gluten-free foods are not. Gluten-free junk food is still junk food.

Bottom Line: Although removing gluten is crucial for some people, the current body of evidence suggests that the majority of people don't benefit from a gluten-free diet.

4. Fiber is Important for Optimal Health and it's a Carbohydrate

Nutrition is rarely black and white.

But one thing that almost all experts agree on, is that eating fiber is good for your health.

Soluble fiber, in particular, is known to be good for heart health and weight management (15, 16).

The thick and sticky soluble fiber found in high-carb foods like legumes, potatoes and oats helps to slow down digestion. Fiber also increases the time it takes to digest and absorb nutrients (17).

This leads to a longer feeling of fullness and a significantly reduced appetite. Fiber is also closely linked with important fat loss around the heart and other organs (18).

Interestingly, almost all dietary fiber is made of carbs, we just don't have the enzymes to digest them.

Bottom Line: Most dietary fiber is made of carbohydrates. Soluble fiber is particularly beneficial for weight maintenance and heart health.

The role that our gut bacteria have on health is a new and exciting area of science.

It is thought that the balance between “good" and “bad" bacteria influences our risk of developing many lifestyle diseases, ranging from physical to psychological.

In order to grow, the “good" bacteria need carbs that they can ferment for energy.

As it turns out, soluble fiber appears to be the important gut-nourishing nutrient they feed on (19).

Once again, some of the best food sources of soluble fiber include legumes and oats.

Bottom Line: It is important to maintain a healthy balance of gut bacteria and eating soluble fiber may play a crucial role.

6. On a Nutrient-To-Cost Basis, Legumes are a Real “Superfood"

Legumes are a type of edible plant seeds. Some examples include beans, peas, chickpeas, lentils and peanuts.

They are naturally high in carbs, which means they are often excluded from low-carb eating patterns. They are also eliminated on a strict paleo diet.

They are also very cheap to produce and package, compared to other high-protein food sources like meat and dairy.

This remarkable nutrition-to-cost ratio is why legumes are an important food staple in many developing countries.

Bottom Line: Legumes are incredibly healthy and amazingly cheap. They are rich in protein, fiber and other valuable nutrients. Calorie for calorie, they are one of the most nutritious foods out there.

There is a myth that a low-carb diet can outperform a conventional high-carb diet for athletes.

One well-designed study followed cyclists performing a 100-km trial with intermittent sprints. The researchers compared following a low-carb diet to a high-carb diet, for the week leading up to the trial (20).

Although both groups had similar race times, the high-carb group outperformed the low-carb group's sprint output on all four occasions (20).

Solid conclusions can't be drawn from just one study, but the weight of evidence overwhelmingly supports those results (21).

If you're fat-adapted on a low-carb diet, you can still perform very well, but there are certainly no good studies to show you can outperform higher-carb diets (22).

This holds true for cardio endurance events like cycling, as well as weight training and bodybuilding for muscular strength and endurance (23).

For those who simply exercise to keep fit, a low-carb diet will likely not have a negative impact on your performance. However, it probably won't improve it either.

Bottom Line: Athletes do not perform better on low-carb diets than higher-carb diets. Performance is similar for endurance, but worse for sprinting.

Some sources claim that carbs cause harmful brain inflammation.

However, this is an untested hypothesis that only presents one side of the debate.

Unlike refined grains, whole grains are high in magnesium and fiber, both of which are linked with less inflammation (24, 25, 26).

In fact, the extensively studied Mediterranean diet, which is rich in whole grains, is strongly associated with slower age-related mental decline and a lower risk of developing Alzheimer's disease (27, 28).

The latest review on known Alzheimer's risk factors analyzed 323 previous studies, with not a single mention of grains or gluten (29).

Bottom Line: There is no evidence linking whole carb sources to brain damage or diseases like Alzheimer's. The latest review on risk factors for Alzheimer's doesn't even mention grains or gluten.

The Blue Zones or the regions where people live measurably longer lives, provide us with unique insights about certain eating patterns.

The island of Okinawa in Japan has the most centenarians (people who live over the age of 100) in the world.

Their diet is very high in sweet potatoes, green vegetables and legumes. Prior to 1950, a whopping 69 percent of their calorie intake came from sweet potatoes alone (30).

Another long-living population inhabits the Greek island of Ikaria. Nearly one in every three people lives to be 90 and they eat a diet rich in legumes, potatoes and bread.

Several other Blue Zone regions share similar dietary traits, indicating that carbs are not causing problems for these people.

Consider Food as a Whole, Not Just Its Nutrients

It's important to think about foods as a whole and not just by their individual nutrients. This is especially true when talking about carbs.

For instance, carb-laden junk foods are not healthy. They provide no nutritional value and are today's biggest contributors to excess calories.

It's also important to note that low-carb diets can be an effective tool for weight loss and diabetes control, at least in the short-term.

But that doesn't mean carbs alone make people fat and sick in the first place, nor are they the sole cause of the current state of public health.

This depends entirely on the context and varies between individuals.

Some people do well with little carbs, others function just fine eating plenty of carbs from healthy food. Different strokes for different folks.

The main message to take away is that whole carb foods can definitely be part of a healthy diet … and enjoying some carbs at Christmas is not blasphemy.

Dr. Mark Hyman: Do You Have Skinny-Fat Syndrome?

Matcha: The Healthier Green Tea You Should Be Drinking

10 Reasons Why GMO Smart Label Isn't 'Smart' at All