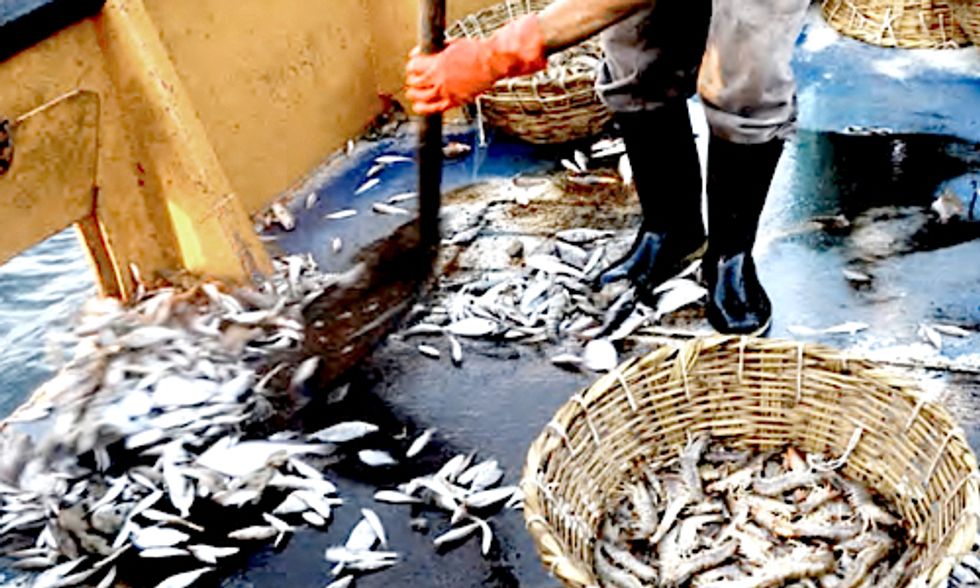 Today, Oceana released a new report exposing nine of the dirtiest fisheries in the U.S. These nine fisheries combined throw away almost half of what they catch and are responsible for more than 50 percent of all reported bycatch in the U.S., injuring and killing thousands of protected and endangered species every year.

Bycatch is defined as of non-target fish and ocean wildlife that are caught in commercial fishing gear and discarded dead or dying once the fishermen reach their quota. © Naomi Blinick /Marine Photobank /Oceana report

In the report, Wasted Catch: Unsolved Bycatch Problems in U.S. Fisheries, Oceana explains that despite significant progress in the last decade, the catch of non-target fish and ocean wildlife, or “bycatch,” remains a significant problem in domestic fisheries. In fact, researchers have estimated that approximately 20 percent of the total U.S. catch is thrown away each year.

“Anything can be bycatch,” said Dominique Cano-Stocco, campaign director at Oceana. “Whether it’s the thousands of sea turtles that are caught to bring you shrimp or the millions of pounds of cod and halibut that are thrown overboard after fishermen have reached their quota, bycatch is a waste of our ocean’s resources. Bycatch also represents a real economic loss when one fisherman trashes another fisherman’s catch.”

Though some fishing methods are more harmful than others, researchers, fisheries managers and conservationists all agree that bycatch is generally highest in open ocean trawl, longline and gillnet fisheries. These three gear types alone are responsible for the majority of bycatch in the U.S. and are used by these nine dirty fisheries.

Below, is a slideshow featuring some of the National Marine Fisheries Service images of marine life injured and killed in drift gillnets off the coast of California, obtained by Oceana though a Freedom of Information Act request:

“Hundreds of thousands of dolphins, whales, sharks, sea birds, sea turtles and fish needlessly die each year as a result of indiscriminate fishing gear,” said Amanda Keledjian, report author and marine scientist at Oceana. “It’s no wonder that bycatch is such a significant problem, with trawls as wide as football fields, longlines extending up to 50 miles with thousands of baited hooks and gillnets up to two miles long. The good news is that there are solutions—bycatch is avoidable.”

Unfortunately, the bycatch problem in the U.S. is likely much worse than realized, because most fisheries do not have adequate monitoring in place to document exactly what and how much is caught and subsequently discarded. In some fisheries, as few as one in 100 fishing trips carry impartial observers to document catch, while many are not monitored at all, leading to large gaps in knowledge and poor quality data.

Nine Dirty Fisheries (based on data published by the National Marine Fisheries Service):

“Reducing bycatch is a win/win for fishermen and conservationists,” said Cano-Stocco. “By eliminating wasteful and harmful fishing practices we can restore and maintain fish populations that are essential to renewed abundance and healthy oceans, while also preventing the deaths of whales, dolphins, seals and sea turtles.”

“The solution can be as simple as banning the use of drift gillnets, transitioning to proven cleaner fishing gears, requiring Turtle Excluder Devices in trawls, or avoiding bycatch hotspots,” said Dr. Geoff Shester, California program director at Oceana. “Proven solutions and innovative management strategies can significantly reduce the unnecessary deaths of sharks, sea turtles, dolphins and other marine life, while maintaining vibrant fisheries.”

In order to reduce the amount of wasted catch and the number of marine animals killed in U.S. fisheries, Oceana is calling on the federal government to do three things:

1. COUNT everything that is caught in a fishery, including bycatch species.

2. CAP the amount of wasted catch in each fishery using scientifically based limits.

3. CONTROL and avoid bycatch by making improvements such as using cleaner fishing gear and enhanced monitoring.