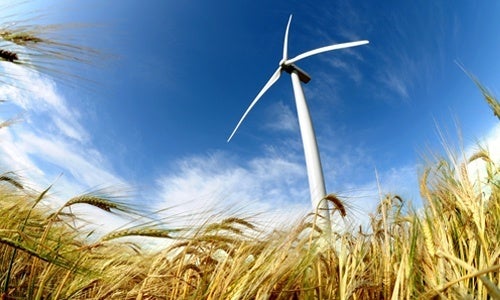 36 of the world's biggest businesses are now set to become 100% renewable. See who: http://t.co/YjoWTIxgMu #RE100 pic.twitter.com/h9bXBA29Hw

RE100 is a global campaign led by The Climate Group in partnership with CDP, to “engage, support and showcase influential businesses committed to 100 percent renewable electricity.” Thirty-six companies have joined RE100 since it was launched at Climate Week NYC in 2014, including H&M, IKEA, Nestlé, Swiss Re, UBS and Unilever.

“By massively increasing private sector demand for renewable power, RE100 will accelerate the transformation of the global energy market, enabling the transition to a prosperous low-carbon future,” says The Climate Group.

The move towards 100 percent renewable energy has become increasingly popular. Aspen, Colorado recently became the third U.S. city to phase out fossil fuels completely. According to a report issued last week by CDP, “96 cities are already taking action to decarbonize their electricity supply.”

“Walmart set out on its journey to be powered by 100 percent renewable beginning in 2005, and today’s pledge with RE100 further affirms the importance of our aspirational goal,” said Enrique Ostale, president and CEO of Walmart Latin America. “With much of Walmart’s projected growth over the coming years set to take place in Central and Latin America, we are committed to increasing demand for renewable energy globally.”

Walmart's pledge to @theRE100 reaffirms goal to be powered by 100% renewable energy. http://t.co/19yGoPUvTa https://t.co/RiMMelOZGQ #CWNYC

“As a leading global financial institution, we have had a long standing commitment to finance and invest in clean energy around the world to help the transition to a low carbon economy,” says Kyung-Ah Park, head of Environmental Markets at Goldman Sachs. “We are also committed to reducing our own carbon footprint, and will target the use of 100 percent renewable power to meet our global electricity needs by 2020. We’re proud to be part of the RE100 initiative as a way to partner with leading companies in expanding the deployment of clean energy.”

With the United Nations Climate Change Conference in Paris approaching, the companies chose this year’s Climate Week NYC to highlight their commitment to a low-carbon future and show that “leading businesses want strong climate action from governments, while increasing demand for renewables themselves,” says The Climate Group.

“Research shows that the most ambitious companies have seen a 27 percent return on their low carbon investments—no wonder new names keep joining RE100,” says Mark Kenber, CEO of The Climate Group. “Lowering risk, protecting against price rises, saving millions and boosting brand is what shaping a low carbon economy is all about. Today these companies are signaling loud and clear to COP21 negotiators that forward-thinking businesses back renewables and want to see a strong climate deal in Paris.”