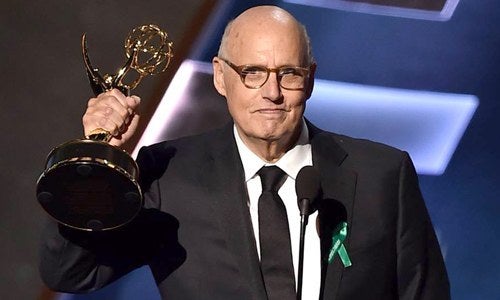 If you were watching the Emmy’s last night, you might have been wondering why some actors were wearing those little green ribbons on their lapel.

What is the green ribbon about? #Emmys

The green ribbon on the actors at the #Emmys is for what reason? Curious…

The ribbon was part of the Natural Resource Defense Council‘s (NRDC) campaign of support for President Obama’s climate plan. NRDC is circulating a petition online to demand global leaders take strong action on climate change. The petition will be delivered at the UN Paris climate talks later this year.

The celebrities were using the high-profile event to raise awareness about the need to take strong action on climate change. Actors such as Jeffrey Tambor, who won the Emmy for Outstanding Actor in a Comedy for Transparent, donned the ribbon. As did his co-star Gabby Hoffman. Julia Louis-Dreyfus, who won the Emmy for Outstanding Actress in a Comedy for Veep also showed support along with Louis CK, Don Cheadle and Mandy Patinkin.

Laurie David, her husband and her friend all wore the green ribbon as well. David produced An Inconvenient Truth and, most recently, teamed up with Katie Couric to executive produce Fed Up, a film about the causes of obesity in the U.S.

The stars could not have picked a better time to show their support for climate action because the temperature in Los Angeles on Sunday reached 100 degrees Fahrenheit—making it the hottest Emmy’s ever. As celebrities used fans to cool themselves off, they just could not get over how hot is was. “I’m too hot to talk,” Ricky Gervais told Ryan Seacrest via New York Daily News. “I got out the car and it was like stepping into an oven.”

Miss Universe 2012 winner Olivia Culpo almost fainted on the red carpet because of the heat.

Mario Lopez was so hot he sweated through at least one shirt:

I marinated in my own sweat all day… #Emmys #ConstantShirtChanges #PeopleFainting A photo posted by Mario Lopez (@mariolopezextra) on Sep 20, 2015 at 6:31pm PDT