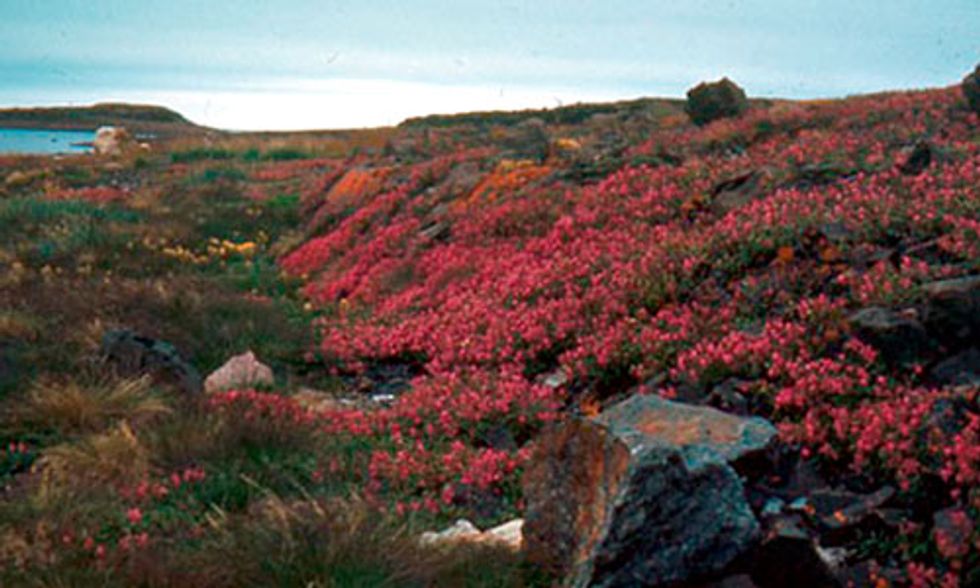 The northern edge of North America is getting steadily greener. In the most detailed study so far of plant growth across Alaska and Canada, scientists say that about a third of the land cover now looks less like tundra, and more like a warmer ecosystem.

Flowers carpet the tundra in Nunavut, the northernmost territory of Canada. Photo credit: DB Marsh/Library and Archives Canada via Flickr

The researchers report in the Journal of Remote Sensing that examination of 87,000 images captured by the NASA Landsat satellite reveals that Alaska, Quebec and other regions became greener between 1984 and 2012.

“The greening trend was unmistakable,” the scientists reported. In Canada, northern forests tended to become greener, although if anything they declined in Alaska. Overall, 29.4 percent of the region became greener, and only 2.9 percent declined.

The Arctic is the fastest-warming region of the northern hemisphere, with longer growing seasons and thawing permafrost. The scientists saw grassy tundra convert to shrubland, and shrubs grow in size and density, and such changes will inevitably start to play into water, energy and carbon cycles.

In a separate study, the USGS reports that roughly 53 percent of America’s carbon—material that could stay in the permafrost or, in a warming world, escape into the atmosphere to accelerate climate change even further—is stored in the forests, wetlands and permafrost of Alaska.

The finding, which is explained in detail in a new study, means that Alaska’s carbon potential is greater than that of all the other 49 states put together. And it’s a cause for worry.

Virginia Burkett, USGS associate director of climate and land use change, said: “Carbon stored in high latitude ecosystems is considered more vulnerable than carbon sequestered in ecosystems in the temperate zone, because average temperatures are predicted to increase faster in the boreal and Arctic regions during the remainder of the century.

“This new assessment specifically reveals how soil carbon losses in Alaska are amplified by wildfires, which have increased in size and frequency with the warming Arctic climate.”

Concern about the future of Alaska is not new. Researchers have observed that the region’s glaciers have begun to retreat and forest fires have become more damaging. Average air temperatures over land in the Arctic have increased by 3°C since the beginning of the 20th century.

Overall, the report confirms that Alaska is still a “sink” for atmospheric carbon, absorbing about 3.7 million tonnes a year from the atmosphere, and the greening of the region may increase this capacity.