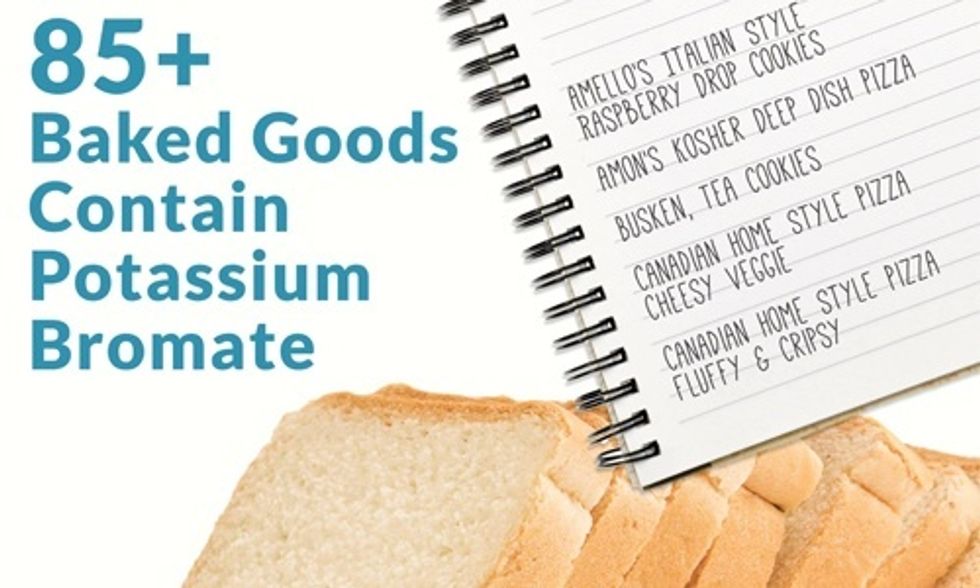 Few foods evoke an image of wholesomeness like fresh-baked bread. But the flour used in many commercial baked goods may include an additive that’s been linked to cancer.

Does your favorite bread contain a possible cancer-causing additive? Find out here: http://bit.ly/1Lwqrb1

The additive is called potassium bromate, which is added to flour to strengthen the dough, allow it to rise higher and give the finished bread an appealing white color.

Regulators in the U.S. and abroad have reached troubling conclusions about the risks of potassium bromate that you probably don’t know about, but should. In 1999 the International Agency for Research on Cancer determined that potassium bromate is a possible human carcinogen.  It is not allowed for use or is banned as a food additive in a number of countries, including the UK, Canada, Brazil and the European Union. The state of California requires food with potassium bromate to carry a warning label.

In tests on lab animals, exposure to potassium bromate increased the incidence of both benign and malignant tumors in the thyroid and peritoneum—the membrane that lines the abdominal cavity. Later research confirmed and expanded these findings, concluding that ingesting potassium bromate resulted in significant increases in cancer of the animals' kidneys, thyroid and other organs.

Potassium bromate also has the potential to disrupt the genetic material within cells. Upon entering the body, potassium bromate can be transformed into molecules called oxides and radicals. These highly reactive molecules can damage DNA and may play a role in the development of cancer. Scientists have observed such damage in human liver and intestine cells, where exposure to potassium bromate resulted in breaks in DNA strands and chromosomal damage.

Researchers also saw significant damage to the cell membranes of lysosomes—the small intracellular bodies responsible for important cell functions such as cellular digestion—ironically, the process by which food is broken down into components useful to our cells. Models of the relationship between DNA damage and potassium bromate show a consistent low-dose linear response, which means that the amount of DNA damage observed is proportional to the amount of potassium bromate consumed.

Despite the significant evidence of potassium bromate’s harmful health effects, the food industry has long argued that it is of no concern in baked products. The industry claims potassium bromate is theoretically fully converted into potassium bromide, a similar yet non-carcinogenic chemical, during baking. But testing in the UK revealed that potassium bromate remains detectable after baking, with six out of six unwrapped breads and seven out of 22 packaged breads containing measurable levels.

California is the only state to have taken any measures to warn residents of the dangers associated with this chemical, placing potassium bromate on its Proposition 65 list, which means that products that contain it must carry a cancer warning on their labels. However, no other regulatory agency has taken any action to regulate or remove this dangerous chemical from American grocery store shelves. Our nation’s food additive review system fails in its mandate to keep Americans safe. Congress must overhaul this broken process in order to truly protect us from potentially cancer-causing chemicals such as potassium bromate.

In light of the evidence that suggests potassium bromate has the potential to be genotoxic and carcinogenic and the decisions by numerous regulatory authorities based on this evidence, EWG recommends a precautionary approach to consumers: You should avoid food products that contain this chemical. Manufacturers should look to safer alternative methods and ingredients to produce their baked goods.

How Can You Avoid It?

Check the list and use EWG's Food Scores database and companion app to find foods without potassium bromate.