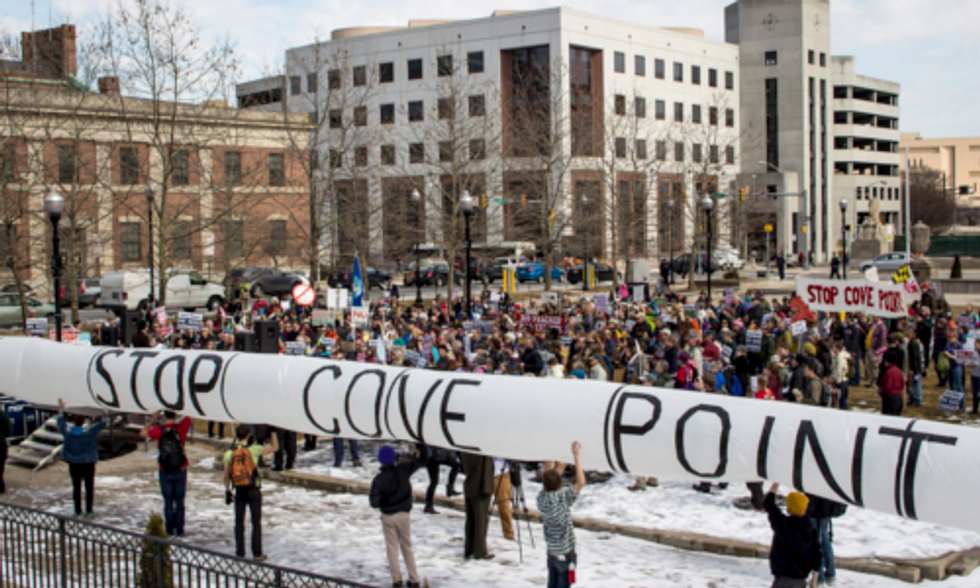 Yesterday, as a key state permit hearing began in downtown Baltimore, MD, activists from every corner of the state and from across the Mid-Atlantic marched to the doorstep of the Public Service Commission to send one clear message to state leaders: “Stop Cove Point.”

The controversial $3.8 billion Cove Point project, proposed by Virginia-based Dominion Resources, would take gas from fracking wells across the Appalachian region, liquefy it along the Chesapeake Bay in southern Maryland, and export it to Asia.

The nearly 1,000-strong demonstration—estimated to be the largest environmental protest in Baltimore history—united people whose land, homes and health are threatened by the new region-wide wave of harmful fracking, climate change pollution and explosion-prone gas infrastructure that Dominion’s plan could trigger. Analysis shows that the process of drilling, piping, liquefying and exporting gas is as bad as—or worse—for the climate than burning coal. In fact, Cove Point would become the single biggest trigger of planet-heating pollution in the state of Maryland.

Rally participants literally carried their “Stop Cove Point” message to the Public Service Commission—marching a 100-foot-long gas pipeline prop emblazoned with those words around the agency’s headquarters. Inside, attorneys representing environmental groups testified against Dominion’s application for a permit to build a 130-megawatt gas-fired “liquefaction” complex at Cove Point.

By every measure—including raising prices for ratepayers, impacting air and water, and degrading local quality of life—they argued that Dominion’s plan would overwhelmingly benefit the gas industry at the expense of Maryland’s economy and environment.

Demonstrators also called for leadership, not more silence, from Maryland’s elected officials, especially Gov. O’Malley (D-MD) and U.S. Senators Ben Cardin and Barbara Mikulski. Speakers called on them to ensure that federal regulators give the people of Maryland the full and customary Environmental Impact Statement typically required for a project of Cove Point's size and scope—the type of review backed by 81 percent of Maryland voters in a recent poll.