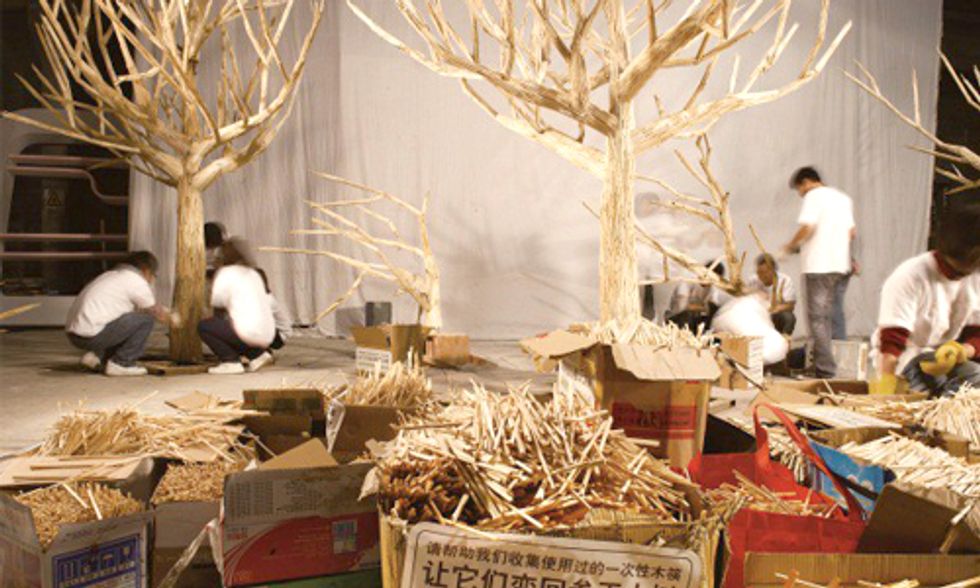 You know an invention has its drawbacks when even the guy who invented it says he’s sorry he did so.

That would be John Sylvan, inventor of the easy-to-use Keurig coffee maker—an invention deemed “the most wasteful form of coffee” on the planet.

Sylan says he regrets the creation largely due to its severe ecological impact. The Keurig uses disposable plastic coffee pods, called “K-Cups,” which are not easily recyclable or biodegradable.

“I don’t have one,” Sylvan said of the Keurig. “They’re kind of expensive to use. Plus it’s not like drip coffee is tough to make.”

Convenience-obsessed America is the world’s largest coffee consumer. Nearly 85 percent of adults in America drink coffee. According to the National Coffee Association, nearly 1 in 5 adults drink single-cup-brewed coffee in a single day.

Last year, Keurig Green Mountain sold a whopping 9.8 billion K-Cups—enough to circle the Earth more than a dozen times. Keurig says it wants all K-Cups to be recyclable by 2020, but by then it could be too late.

“Do you feel OK contributing to that?” Hachey asks.

K-Cups are not the only culprits affecting the environment. America represents only 5 percent of the world’s population, but generates nearly a quarter of the world’s trash.

Many everyday items that we take for granted have a significant impact on Mother Earth. Here are a few humble household supplies that hurt the environment more than you’d expect:

Nearly 75 percent of anti-bacterial liquid soaps and body washes in the US include an ingredient called triclosan. Research shows that small quantities of triclosan persist after being flushed down the drain, and even after water is treated at sewage plants.

These small quanitities then end up in streams and other bodies of water. They can disrupt algae’s ability to perform photosynthesis and build up in fatty tissues of animals higher up in the food chain.

Mowing the lawn is actually terrible for the environment. According to a Swedish study, a lawn mower produces nearly the same amount of oily air pollution as a 100-mile car trip.

“Lawn and garden equipment really does add to air pollution,” Cathy Milbourn, spokeswoman for the U.S. Environmental Protection Agency (EPA), told ABC last year. “People can reduce the impact it has by using [lawn equipment] in the early morning or in the late afternoon. Or perhaps not at all.”

Most of the tea brewed in America is made with tea bags, which means that an average tea drinker consuming 5 cups a day gets through about 13 sq meters of perforated paper every year.

According to a report by Which? Gardening, teabags produced by some of the top tea manufacturers—including Twinnings, Tetley and PG Tips—are only about 75 percent biodegradable.

While most teabags are made with paper fiber, they also include plastic polypropylene—an ingredient that makes teabags heat-resistant but is not fully biodegradable.

Whitney Kakos, the sustainability manager for Teadirect, says the use of polypropylene is an “industry-wide practice.” There are also the luxurious silken (basically plastic) tea bags. Supposedly of higher quality and visually appealing, these bags are actually harmful to consumers and contribute to landfill waste.

About 50 billion bottles of water are consumed every year, 30 million of which are consumed in the US alone. Nearly 1,500 water bottles are consumed per second in America. About 17 million barrels of oil are used every year to produce these bottles.

The national recycle rate for PETs, or bottles made with polyethylene terephthalate, is only 23 percent—which means 80 percent of plastic water bottles end up in landfills. And even if we were on our environmentally best behavior, not all plastic bottles placed in designated containers are recycled because only certain types of plastic can be recycled in limited municipalities.

Found in everything from toothpaste to exfoliating face washes and body scrubs, microbeads actually wreak havoc on the environment.

According to a recent study by the Australian Research Council Centre of Excellence for Coral Reef Studies at James Cook University, these tiny pieces of plastic find their way down our drains through filtration systems to the ocean. Soaking up toxins like a sponge, they then contribute to the plastic pollution of water bodies, potentially starve coral reefs of proper food and negatively affect other marine organisms.

According to the U.S. EPA, about 2 billion razors are thrown away every year. Although you can recycle the steel blades, your good ol’ disposable razor most likely makes its way to the landfill.

Add that to the higher environmental cost of production using raw materials and the water used while actually shaving and you’ve got one of the most wasteful bathroom products around.

If you think your morning paper cup of coffee is recyclable and environmentally friendly, think again.

Every year, Americans toss out more than 80 billion single-use cups, thanks to our morning coffee runs. These cups are also coated with low-density, heat-resistant polyethylene that is not biodegradable. In addition to these cups’ heading for a landfill and taking more than 20 years to decompose, the very process of making them is extremely harmful to the environment. Production consumes forests and large volumes of water, and expels dirty water.

About 3.8 million trees are cut down to produce a staggering 57 billion disposable pairs of chopsticks every year, half of which are used within China. About 77 percent are exported to Japan, 21 percent to South Korea and 2 percent to America.

College students work on assembling trees from 80,000 used disposable chopsticks, part of an exhibit to raise awareness about deforestation and the waste of resources. China produces 57 billion pairs of disposable chopsticks every year, requiring over 1.18 million square meters of forest. Photo credit: Greenpeace

But despite taxes levied in 2006 and warnings of government regulations to monitor production in 2010, disposable chopstick use, production and discard is on the rise and continues to devastate forests in China at an alarming rate.

5 Ways to Green Your K-Cup