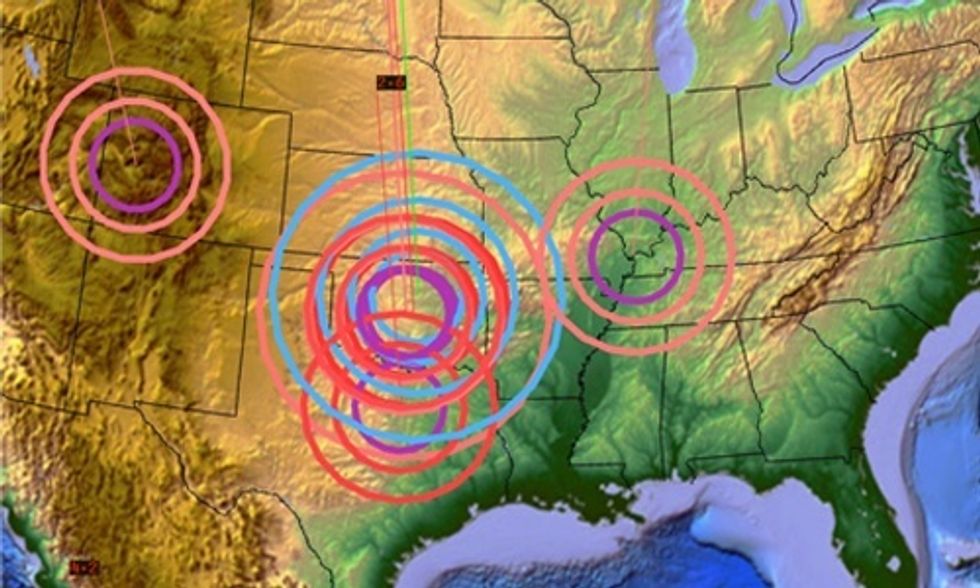 A new report, released Thursday from the U.S. Geological Survey (USGS), identified eight states in the eastern and central U.S. where fracking operations have led to dramatic increases in earthquakes, primarily from the injection of the wastewater byproduct of drilling operations into underground wells. This process can activate faults that in some cases were previously unknown.

The injection of fracking wastewater into underground wells has exploded the amount of earthquake activity in previously inactive regions of the county. Image credit: USGS

"Earthquake activity has sharply increased since 2009 in the central and eastern United States. The increase has been linked to industrial operations that dispose of wastewater by injecting it into deep wells," the report says bluntly, in a rebuke to the earthquake deniers in the oil and gas industry, such as fracking founder Harold Hamm, who pressured Oklahoma officials to stay silent about the connection.

While Oklahoma, Texas and Ohio have gotten much of the attention for increases in seismicity in areas where earthquakes were once rare, they aren't the only states in danger of more and larger earthquakes. The USGS report also pointed to Alabama, Arkansas, Colorado, Kansas and New Mexico and identified 17 zones within the eight states in particular danger from an increased number of what it calls "induced" quakes.

The report, Incorporating Induced Seismicity in the 2014 United States National Seismic Hazard Model, analyzed these seismic activity increases and developed the models to project how hazardous earthquakes could be in these in these zones, taking into account their rates, locations, maximum magnitude and ground motions.

“This new report describes for the first time how injection-induced earthquakes can be incorporated into U.S. seismic hazard maps,” said Mark Petersen, chief of the USGS National Seismic Hazard Modeling Project. “These earthquakes are occurring at a higher rate than ever before and pose a much greater risk to people living nearby. The USGS is developing methods that overcome the challenges in assessing seismic hazards in these regions in order to support decisions that help keep communities safe from ground shaking.”

The USGS has previously released National Seismic Hazard maps, used for insurance purposes, building codes and emergency response plans, outlining the hazards of naturally occurring earthquakes. They projected the likelihood of a quake over 50 years, the average lifespan of a building.

"However, these new induced seismicity products display intensity of potential ground shaking from induced earthquakes in a one-year period," said the study. "This shorter timeframe is appropriate because the induced activity can vary rapidly with time and is subject to commercial and policy decisions that could change at any point."

That's a reference to the varying state regulations about allowing injection or accepting wastewater byproducts from other states. For instance, because of lax regulation in Ohio, the state receives millions of gallons of wastewater from heavily fracked Pennsylvania where injection wells are subject to stricter rules.

The report also states, "Many questions have been raised about whether hydraulic fracturing—commonly referred to as 'fracking'—is responsible for the recent increase of earthquakes. USGS’s studies suggest that the actual hydraulic fracturing process is only occasionally the direct cause of felt earthquakes." But it says, "Large volumes of wastewater can result from a variety of processes, such as a byproduct from energy production. Wastewater injection increases the underground pore pressure, which may lubricate nearby faults thereby making earthquakes more likely to occur."