8 Scheming Plans for ALEC in 2015 and Beyond 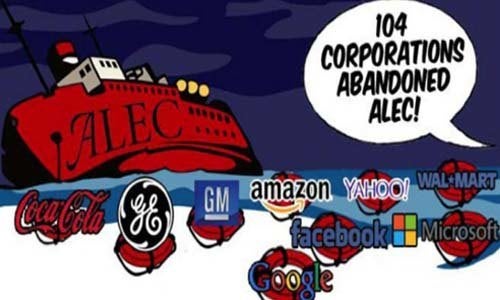 This week, the American Legislative Exchange Council, or “ALEC,” will bring together hundreds of corporate lobbyists with state and local politicians at a posh hotel in San Diego for the group’s annual meeting.

ALEC alum Scott Walker, who has signed over 20 ALEC bills into law, will address this month’s meeting, as well as Mike Huckabee and Ted Cruz, who participated in ALEC meetings before he joined the U.S. Senate. Community groups are planning on bringing a little transparency to the proceedings, by welcoming the candidates and ALEC participants on July 22. 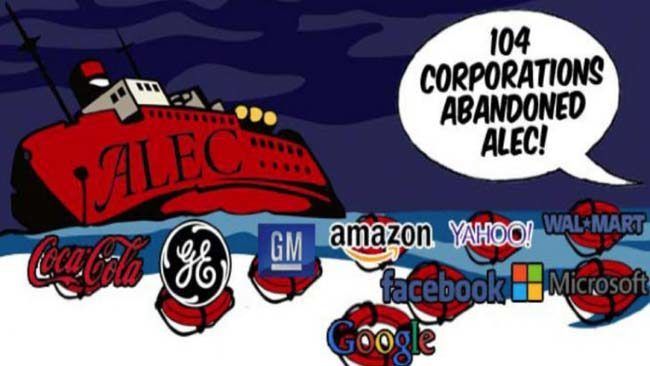 Over a dozen companies, including tech giants Google and Facebook, stopped funding ALEC over its role in promoting climate change denial. Photo credit: Center for Media and Democracy

ALEC has had a mixed year. Over a dozen companies, including tech giants Google and Facebook, stopped funding the group over its role in promoting climate change denial, yet after the 2014 elections gave Republicans control of 68 out of 98 state legislative bodies, some states have had few impediments to the corporate-friendly legislation that ALEC peddles. For example, in just the first half of 2015, Wisconsin became a “right to work” state and repealed the prevailing wage; Michigan blocked local control over minimum wage and paid sick days; and Texas banned cities from regulating fracking.

A look at the San Diego ALEC agenda tells us more about what ALEC has planned for 2015 and beyond.

Even though California is suffering from a historic drought, the climate change deniers on the Environment and Agriculture Task Force will be working on new ways to stymie action addressing carbon emissions.

In recent years, ALEC has targeted the Environmental Protection Agency’s (EPA) “Clean Power Plan,” which is a set of rules limiting carbon dioxide pollution from coal plants. At the behest of its funders like Koch Industries, Peabody Energy, and American Electric Power, ALEC has been organizing a state-level campaign against the rules: the group organized legislators to press their state attorneys general into joining litigation backed by the energy industry that challenges the regulations, adopted a model resolution attacking the plan, and last December adopted a model bill that would create new hurdles for the Plan’s implementation.

At this month’s meeting, the Energy, Environment, and Agriculture Task Force—which is chaired by American Electric Power—will consider a “State Power Accountability and Reliability Charter (SPARC),” which seeks to undermine the Clean Power Plan by declaring that state agencies cannot implement it. And, the task force’s “Energy Subcommittee” will hold a discussion on “State Responses to EPA’s Proposed Clean Power Plan.”

Another model bill on the ALEC agenda is the “Environmental Impact Litigation Act,” which effectively allows corporate interests to hire a state’s Department of Justice as their own private attorneys. The bill creates a corporate-backed fund for states to sue over federal environmental laws—such as the EPA’s Clean Power Plan—guided by an “environmental impact litigation advisory committee” made up of political appointees and representatives of “individuals representing agriculture and energy trade commissions.”