8 Reasons to Be Hopeful About Our Climate Future 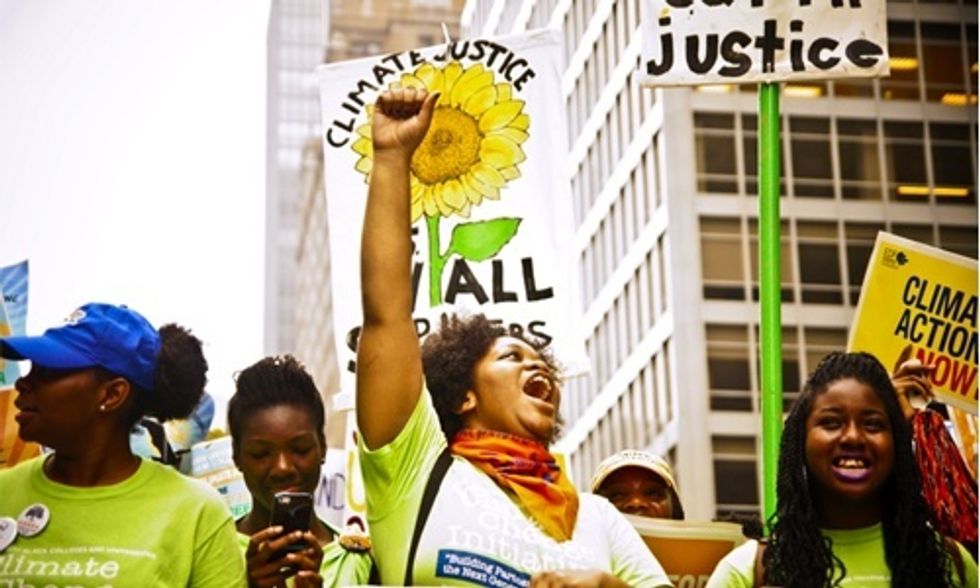 2015 may be on track to become the warmest year on record, but the people’s climate movement has been heating up just as fast. At the end of this year, world leaders will gather in Paris for a major international climate conference—and people around are taking action to show these leaders it’s time for serious change.

Here are just some of the ways the people’s climate movement has been showing its game face and winning victories over the past 12 months.

1. Where It All Began: The Largest Climate Protest the World Has Ever Seen

Last September, 400,000 people gathered in New York City and around the globe for the first ever People’s Climate March. While the march was certainly not the beginning of the climate movement, it was the first time that it became known as a people’s movement, led by the frontline communities most directly impacted. Global climate change disproportionately affects communities of color. In the U.S., 68 percent of African Americans live within thirty miles of a coal plant, where they are exposed to myriad negative health effects.

Rebranding the fight as a people’s movement has prompted environmentalists to start talking less about polar bears and more about the people who are affected by climate change every day.

2. Under Pressure From the Public, President Obama Vetoes the Keystone XL Pipeline Bill

Years ago, it seemed like few had even heard of the Keystone XL Pipeline. But these days, most can tell you that it continues to be one of the top environmental issues. And this past February, President Obama sided with the scores of Americans who oppose it by vetoing a bill that would have begun its construction.

While the President has yet to fully reject the Keystone XL Pipeline, this veto was a big step in the right direction—and showed the power of people to influence our leaders. A Keystone rejection may not be far away, either; reports indicate that TransCanada, the pipeline company behind the project, is bracing for Obama’s final word on KXL.

Without a doubt, organizing has led to some major climate wins for cities, counties and states. One great example is New York’s historic ban on fracking. After years of being confronted by “fractivists” at his public events and receiving hundreds of thousands of public comments, Governor Cuomo finally succumbed to public pressure and issued a statewide ban. Not long after New York, Maryland followed suit by passing a 2.5 year fracking moratorium.

Once known as “king coal,” the dying coal industry has taken a huge hit this year, thanks in large part to local organizing efforts to shut down coal plants. And just last week, Hawaii’s governor decided to make the switch to 100 percent renewable energy.

This year, the movement to stop Arctic drilling got courageous—and colorful. First, six activists occupied Shell’s drilling rig, the Polar Pioneer, for several days as it crossed the Pacific Ocean. The rig was headed to Seattle for maintenance and it was met by a giant “unwelcome party” when it arrived.

Rallies continued on land and on water as the ship was in port. Finally, as the rig attempted to leave port for the Arctic at the break of dawn, dozens of “kayaktivists” got in the water and attempted to stop the rig using only their boats and their bodies.

Then in late July, Shell had to return a damaged vessel to port in Portland, Oregon. But it was met by an obstruction when it tried to leave: activists had suspended themselves from the St. Johns Bridge, making it impossible for the vessel to safely pass. The protest stalled the vessel for roughly 40 hours and delayed Shell’s time-sensitive Arctic drilling plans as the world watched.

After 40 hours, the last activist has now come down from the St. Johns Bridge in Portland. While all the activists are tired and hot, they are filled with gratitude for amazing support from the #Portland community -- and for everyone around the world that joined with them to protest Arctic drilling. They couldn't do this without YOU! These activists came to block Shell for as long as possible, and that's what they did. Now eyes around the world are on Shell's risky drilling plans. Can you take action at the link in our bio -- and share it with your friends? #pdxvsshell #greenpeace #activism #peoplepower #shellno

Arguably one of the most influential people in the world, Pope Francis is changing the conversation on climate. With an estimated 1.2 billion Roman Catholics in the world, his reach is vast—and in the last year, he has spoken out about climate change more than ever.

In June, the Pope released his Laudato Si, insisting that climate change is caused by humans and drawing attention to how it disproportionately affects the poor. The release of this encyclical reframed the international conversation on climate as a moral one and received support from hundreds of American ministers.

The Pope’s leadership on this issue is already having a vast impact and it’s only growing. Next month, the Pope will visit Washington, DC to address Congress, which has thus far done very little to address or even acknowledge our warming world.

In the last month, wind power hit an all-time price low and solar power became cheaper than natural gas. With clean energy becoming more affordable, utilities, businesses and families across the U.S. are making the switch to save their pocketbooks, as well as the climate.

Another great development for renewables came earlier this year, when Tesla released its 450 volt Powerwall, making it easier than ever for homeowners to store energy that they harnessed from the sun. This innovation has been widely described as a game changer for the solar industry.

In his biggest move yet for the climate, President Obama issued the Clean Power Plan, which will lead to significant reductions in emissions from power plants. The plan on its own is not nearly enough, but it is a big step in the right direction for our climate.

President Obama has spoken out often about the urgent need to address climate change—saying that "our planet is changing in ways that will have profound impacts on all of humankind." And his Clean Power Plan is the largest step he’s made to back up those words. But he’s also contradicted himself by opening up the Arctic to offshore drilling. In order to secure his legacy on climate change, Obama will need to commit to keeping dirty fossil fuels, like coal and Arctic oil, in the ground.

8. The Next Big Moment in the People’s Climate Movement

This past year has reinforced that when people speak up on climate, leaders listen. With the Paris talks just two months away, environmentalists have another great opportunity to make our voices heard.

That’s why this October, people around the world will take part in a giant day of action on climate change. But it won’t have an effect unless hundreds of thousands of people get involved. Organize an event in your community, or find one in your area!

Watch Livestream: Bill McKibben and Naomi Klein Headline ‘Off and On’ Climate Event