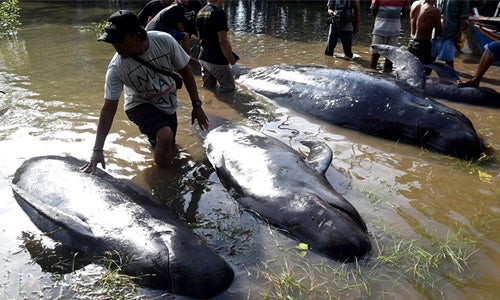 Thirty-two short-finned pilot whales beached themselves during high tide Wednesday, according to The Guardian. Fishermen and officials were able to save 24 of them, but eight returned to shore overnight and died. 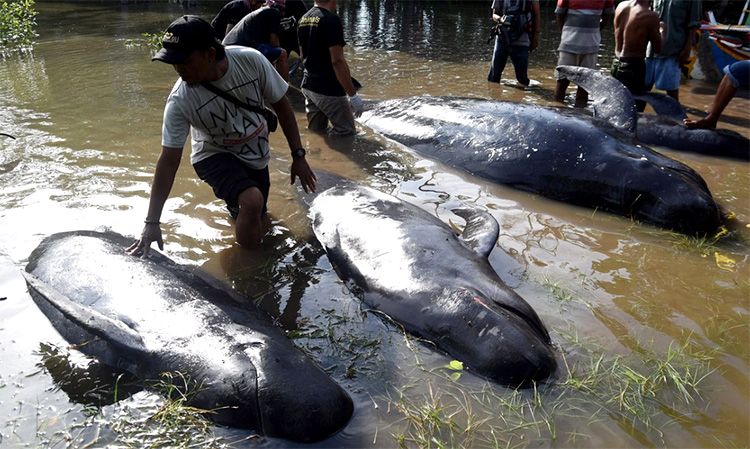 Hundreds of rescuers used multiple methods to get the whales back into the ocean. Fishermen and officials wrapped tarps around the whales and pulled them back out to sea. Swimmers jumped into the water to scare off whales that weren’t already beached. Some disoriented whales were even escorted with boats to ensure they didn’t end up back on shore.

“At first there were just one or two whales swimming near the shore, and the nature of whales is that if they are sick they will come near the shore,” Dedy Isfandi, the head of the local maritime and fisheries office, said.

“But whales have such high social interaction—when one fell ill, they approached the sick one to swim back to sea … when the tide fell all of them were trapped.”

Vets and scientists are conducting autopsies on the animals to figure out why they stranded themselves, The Guardian said. Some officials said turbulent waters in the Indian Ocean or consuming something poisonous could be the cause.

Short-finned pilot whales are part of the oceanic dolphin family, though their behavior is closer to that of whales. Adult males can reach 18-feet in length; females can be 12-feet long. This whale species also has a long life expectancy with males and females living up to 45 and 60 years, respectively.

The primary habitat for short-finned pilot whales is warm, tropical waters. Populations can be found all over the world. There is not enough data to determine their conservation status.