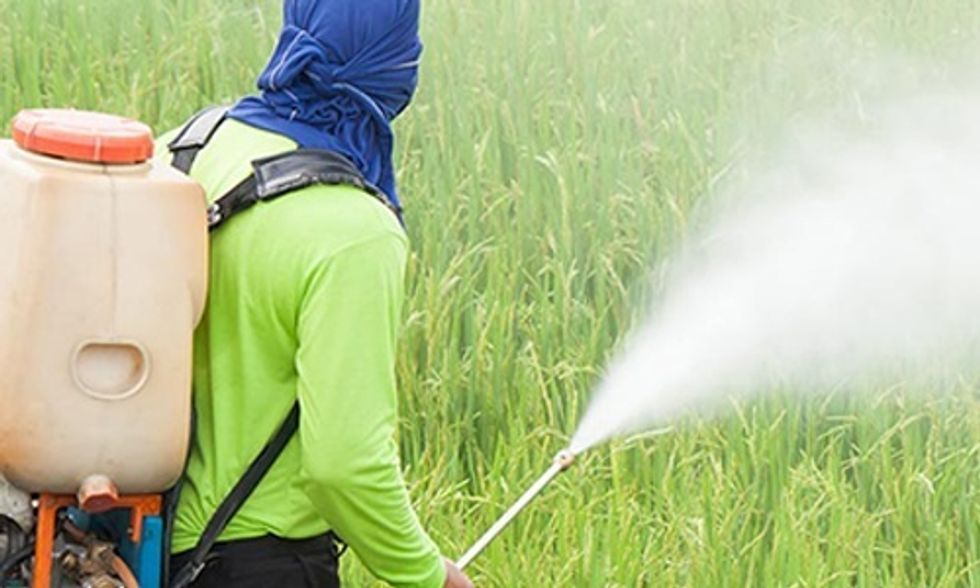 Myths about pesticides are a testimony to the power of advertising, marketing and lobbying. Pesticide corporations, like Big Tobacco and the oil industry, have systematically manufactured doubt about the science behind pesticides and fostered the myth that their products are essential to life as we know it—and harmless if "used as directed."

Myths about pesticides are a testimony to the power of advertising, marketing and lobbying. Photo credit: Pesticide Action Network

The book Merchants of Doubt calls it the "Tobacco Strategy"—orchestrated PR and legal campaigns to deny the evidence, often using rogue scientists to invent controversy around so-called "junk science," for everything from second-hand smoke causing cancer to global warming to the hazards of DDT.

Here are eight of the seemingly plausible myths we hear from the "Big 6" pesticide corporations, including Monsanto, every day:

Myth #1: "Pesticides Are Necessary to Feed the World"

Reality: The most comprehensive analysis of world agriculture to date tells us that what can feed the world—and what feeds most of the world now, in fact—is small-scale agriculture that does not rely on pesticides.

If we were serious about feeding people, we wouldn't grow enough extra grain to feed one-third of the world's hungry and then pour it into gas tanks. Photo credit: Pesticide Action Network

Dow, Monsanto, Syngenta and other pesticide producers have marketed their products as necessary to feed the world. Yet as insecticide use increased in the U.S. by a factor of 10 in the 50 years following World War II, crop losses almost doubled. Corn is illustrative: in place of crop rotations, most acreage was planted year after year only with corn. Despite more than a 1,000-fold increase in use of organophosphate insecticides, crop losses to insects has risen from three-and-a-half percent to 12 percent (D. Pimental and M. Pimental, 2008).

More to the point, hunger in an age of plenty isn't a problem of production (or yields, as the pesticide industry claims), efficiency or even distribution. It is a matter of priorities. If we were serious about feeding people, we wouldn't grow enough extra grain to feed one-third of the world's hungry—and then pour it into gas tanks.

Reality: Pesticides are dangerous by design. They are engineered to cause death. And harms to human health are very well documented, with children especially at risk. Here are a few recent examples from the news:

A large and growing body of peer-reviewed, scientific studies document that pesticides are harmful to human health. The environmental damage caused by pesticides is also clear—from male frogs becoming females after exposure, to collapsing populations of bats and honeybees.

Reality: If someone is exposed to an extremely small amount of one ingredient from a single pesticide at a time, and it was a chemical of relatively low toxicity and exposure occurred outside any window of biological vulnerability, it might pose little danger. Unfortunately, that’s an unlikely scenario.

Even extremely low levels of pesticides can cause irreversible, life-changing harm if they occur at a moment when organs or other systems are developing. Photo credit: Pesticide Action Network

First, pesticide products typically contain several potentially dangerous ingredients (including so-called “inerts” not listed on the label). Second, we’re all exposed to a cocktail of pesticides in our air, water, food and on the surfaces we touch. The combination of these chemicals can be more toxic than any one of them acting alone. Third, many pesticides are endocrine disruptors—and even extremely low doses can interfere with the delicate human hormone system and cause life-changing damage.

Finally, the timing of exposure can be just as—if not more—important than the dose. Even extremely low levels of pesticides can cause irreversible, life-changing harm if they occur at a moment when organs or other systems are developing. One stark example from a recent study using MRI technology illustrates the point: children exposed in utero to the neurotoxic insecticide chlorpyrifos experienced lasting changes in their brain architecture.

It’s also important to understand that research used to determine the safety of a pesticide is funded and conducted by the corporations marketing the product, often leading to distortion of findings.

Myth #4: "The Government is Protecting Us"

Reality: Our regulatory system is not doing its job. More than one billion pounds of pesticides are applied every year on U.S. farms, forests, golf courses and lawns. Farmworkers and rural communities suffer illness throughout the spray season and beyond, and infants around the world are born with a mixture of pesticides and other chemicals in their bodies.

Our regulatory system is not doing its job. Photo credit: Pesticide Action Network

As as the President’s cancer panel concluded in 2010:

The prevailing regulatory approach in the U.S. is reactionary rather than precautionary. Instead of requiring industry to prove their safety, the public bears the burden of proving that a given environmental exposure is harmful.

The cornerstone of pesticide regulation is a fundamentally flawed process of "risk assessment" that cannot begin to capture the realities of pesticide exposure and the health hazards they pose. Environmental Protection Agency officials remain reliant on research data submitted by pesticide manufacturers, who do everything they can to drag out reviews of their products, often for decades. Lawsuits are pending to force theEnvironmental Protection Agency to abide by the law and speed up their reviews.

A better, common sense precautionary approach to protecting us would assess alternatives to highly hazardous pesticides rather than accepting public exposure to pesticides as a necessary evil. Such a shift will require fundamental federal policy reform. Meanwhile, state and local authorities are pressing for rules that better protect their communities.

Reality: Genetically modified organisms are driving up pesticide use, and no surprise: the biggest GMO seed sellers are the pesticide corporations themselves. The goal of introducing GMO seed is simple: increase corporate control of global agriculture. More than 80 percent of the GMO crops grown worldwide are designed to tolerate increased herbicide use, not reduce pesticide use.

Monsanto, the world leader in patented engineered seed, would have us believe that its GMOs will increase yields, reduce environmental impact and mitigate climate change—and that farmers use fewer pesticides when they plant the corporation’s seeds. None of this is true.

On average, Monsanto’s biotech seeds reduce yield. In 2009, Monsanto admitted that its Bollguard GMO cotton attracted pink bollworm—the very pest it was designed to control — in areas of Gujarat, India’s primary cotton-growing state. Introduced in 1996, Monsanto’s Bollguard seeds, which include toxic traits from the soil bacterium Bacillus thuringiensis (Bt), now account for half the cotton grown worldwide. In India, the productivity of Bt cotton has fallen while pesticide costs have risen by almost 25 percent, contributing to the tragic suicide epidemic among India’s debt-ridden farmers.

In 2009, 93 percent of U.S. GMO soybeans and 80 percent of GMO corn was grown from Monsanto’s patented seeds. “Roundup Ready” corn and soybeans, designed for use with Monsanto’s weed killer, mostly feed animals and cars rather than people. Now that weeds have developed resistant to Roundup, Dow and Monsanto are introducing GMO corn that includes tolerance of dicamba and 2,4-D, antiquated and dangerous herbicides prone to drift from where they’re applied on neighboring non-GMO fields and into neighboring communities.

Myth #6: "We're Weaning Ourselves Off of Pesticides"

Reality: After 20 years of market stagnation, the pesticide industry entered a period of vigorous growth in 2004. The global pesticide market was worth approximately $46 billion in 2012 and continues to grow. It is expected to reach $65 billion by 2017, with the U.S. accounting for 53 percent of global use.

The global pesticide market was worth approximately $46 billion in 2012 and continues to grow. Photo credit: Pesticide Action Network

About 80 percent of the market is for agricultural use, but non-agricultural sales and profit margins are growing faster, driven by the rise of a global middle class adopting chemically reliant lawns and landscapes. In addition, the industry strategy of promoting GMO seeds, most of which are engineered to tolerate higher applications of herbicides, has driven increased sales of weed killers.

Myth #7: "Pesticides Are the Answer to Global Climate Change"

Reality: Multinational corporations are working hard to increase their market share by exploiting climate change as a sales opportunity. As of 2008, Monsanto, Syngenta, Bayer, DuPont, BASF and others had filed 532 patents for “climate-related genes,” touting the imminent arrival of a new generation of seeds engineered to withstand heat and drought. Their approach will further restrict the age-old practice of farmers saving seeds with desirable traits—a practice that may prove even more important as the climate changes in unpredictable ways and demands more, not less, farm-scale diversity.

Despite this latest gene-grab, none of these companies have yet been able to engineer any kind of yield-increasing or “climate-ready” seeds. Their promises to end world hunger through drought-, heat- and salt-tolerant seeds and crops with enhanced nutrition have proven empty.

Reality: The resurgence of bedbugs in recent years has nothing to do with the 1972 ban of DDT. Bedbugs, like many mosquitos, are resistant to DDT—and they were decades ago, when DDT was still in use. In some cases DDT even makes bedbug infestations worse, since instead of killing them, it just irritates them, making them more active.

Resistance is also an issue for malaria-carrying mosquitoes. DDT had been abandoned as a solution to malaria in the U.S. long before it was banned for agriculture use.

Around the world, practitioners battling the deadly disease on the ground report that DDT is less effective in controlling malaria than many other tools. A small cadre of chemical advocates continue to aggressively promote widespread use of DDT to combat malaria, bedbugs—even West Nile Virus—despite its lack of effectiveness and growing evidence of damage to human health, even at low levels of exposure.