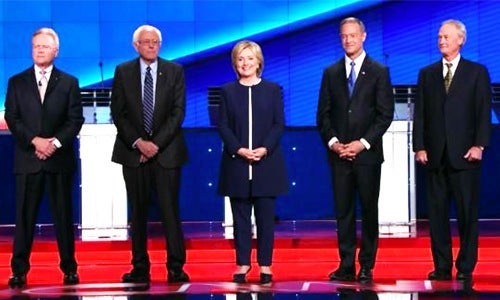 We found several falsehoods and misleading claims in the Democratic candidates’ first debate:

Most gun deaths are suicides—a violent act, but not a crime, as some voters may think Clinton’s claim implied.

According to the most recent figures from the Centers for Disease Control and Prevention, there were a total of 33,636 firearm deaths in 2013. That’s 92 per day for the year. Sixty-three percent of them or 21,175 were suicides. Homicides totaled 11,208 and the rest were unintentional discharges (505), legal intervention/war (467) and undetermined (281).

Sanders doubled down on a bogus claim that the income and wealth gaps between the affluent and the poor are larger in the U.S. than anywhere else:

Sanders: “We should not be the country that has … more wealth and income inequality than any other country.”

This is simply false.

When we first criticized Sanders for a similar claim back on May 28, he at least qualified it by saying U.S. inequality was the widest of any “major” country. As we said in May, that’s true only if Sanders excludes nations such as Russia, Turkey and Brazil from his definition of “major.”

But in the debate, Sanders substituted “any” for “major” and turned what we charitably called an exaggeration into a flat-out falsehood.

We found that the U.S. ranked 42nd in income inequality using the “Gini index,” a widely used measure of inequality, according to the World Bank.

And as for wealth, the U.S. ranked 16th in the share of wealth held by the richest 1 percent, out of the 46 economies studied. Russia, Turkey, Egypt and Brazil were among those whose top 1 percent held more of their nations’ wealth. That was according to the 2014 “Global Wealth Databook.”

When asked about her unusual email arrangement as secretary of state, Clinton said, “What I did was allowed by the State Department.” That’s not the full story.

Clinton conducted government business exclusively using a personal email account (hdr22@clintonemail.com) and those emails were stored on a private server.

As we have written before, the State Department and the Clinton campaign have cited a National Archives and Records Administration (NARA) rule issued in 2009 that said federal agencies that allow the use of personal emails must preserve them “in the appropriate agency recordkeeping system.” So personal emails were allowed.

But federal rules also required Clinton to preserve her work emails “at the end of the Secretary’s tenure or sooner if necessary.” She did not turn over copies of her emails to the State Department until Dec. 5, 2014—nearly two years after she left office on Feb. 1, 2013.

Also, whether the State Department allowed it or not, Clinton’s decision “to conduct all e-mail correspondence through a private e-mail network, using a non-.gov address, is inconsistent with long-established policies and practices under the Federal Records Act and NARA regulations governing all federal agencies,” according to congressional testimony of Jason R. Baron, a former director of litigation at the National Archives, who is now a lawyer at Drinker Biddle.