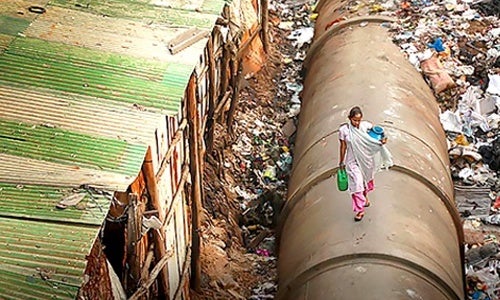 Earlier this year, an obscure United Nations document, the World Water Development Report, unexpectedly made headlines around the world. The report made the startling claim that the world would face a 40 percent shortfall in freshwater in as soon as 15 years. Crops would fail. Businesses dependent on water would fail. Illness would spread. A financial crash was likely, as was deepening poverty for those just getting by. 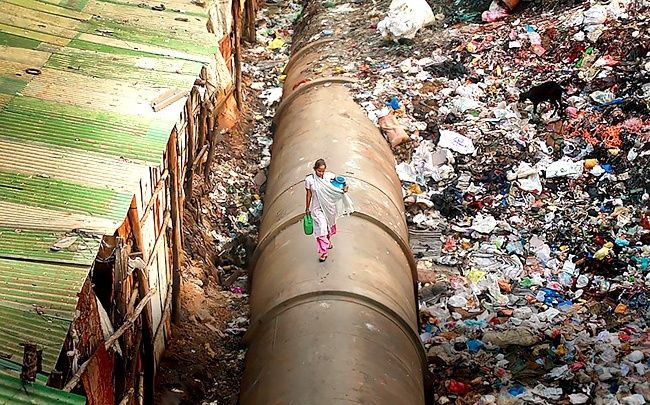 A woman in India walks atop a water main on her way to collect water. Photo credit: Meena Kadri / Flickr

The UN also concluded that the forces destroying the world’s freshwater supply were not strictly meteorological, but largely the result of human activity. That means that with some changes in how water is managed, there is still time—very little, but enough—for children born this year to graduate from high school with the same access to clean water their parents enjoyed.

Though the UN looked at the issue across the globe, the solutions it recommended—capturing rainwater, recycling wastewater, improving sewage and plumbing, and more—need to be implemented locally. Some of the greatest challenges will come in cities, where bursting populations strain systems designed to supply far fewer people and much of the clean water available is lost to waste and shoddy, centuries-old infrastructure.

We’ve looked at eight cities facing different though representative challenges. The amount of water in the Earth’s atmosphere is more or less fixed, meaning that as populations and economies grow, what we have needs to be clean, available, and conserved. Economies, infrastructure, river systems and climates vary from place to place, and the solutions will have to as well. Here is how eight of the world’s major cities are running out of water, and trying to save it.

Tokyo shouldn’t have a water problem: Japan’s capital enjoys average precipitation similar to that of Seattle or London. But all that rainfall is compressed into just four months of the year, in two short seasons of monsoon and typhoon. Capturing and storing so much water in such a short period in an area four times as dense as California would be a challenge anywhere. One weak rainy season means droughts—and those are now coming about once every decade. 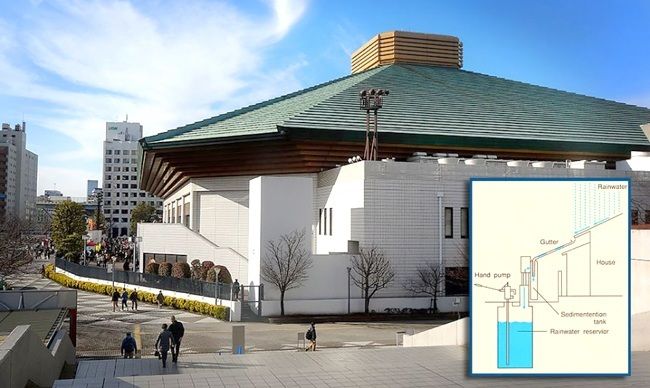 The roof of Ryogoku Kokugikan arena in Tokyo collects rainwater to be used in the building’s toilets. The inset shows a similar system for residential use. Photo credit: Facebook

Betting on the rain will be a precarious strategy for the world’s most populous city and its suburbs, home to more than 30 million people. When the four rivers feeding Tokyo run low, crisis conditions arrive fast. Though efficient, 70 percent of Tokyo’s 16,000-mile-long plumbing system depends on surface water (rivers, lakes, and distant snowpack). With only 30 percent of the city’s water coming from underground aquifers and wells, there are not enough alternative sources to tap during these new cyclical droughts.

The Japanese government has so far proved forward-thinking, developing one of the world’s most aggressive programs for capturing rainwater. In Sumida, a Tokyo district that often faces water shortages, the 90,000-square-foot roof of Ryogoku Kokugikan arena is designed to channel rainfall to a tank, where it’s pumped inside the stadium for nonpotable use.

Somewhat more desperate-seeming is a plan to seed clouds, prodding the environment to do what it isn’t doing naturally. Though tested in 2013 with success, the geo-engineering hack is a source of controversy; scientists debate whether the technique could produce enough rain to make much of a difference for such a large population.

Though most Americans’ concern with water shortage in the U.S. is firmly focused on California at the moment, a crisis is brewing in the last place you’d figure: South Florida, which annually gets four times as much rain, on average, as Los Angeles and about three times as much as San Francisco. 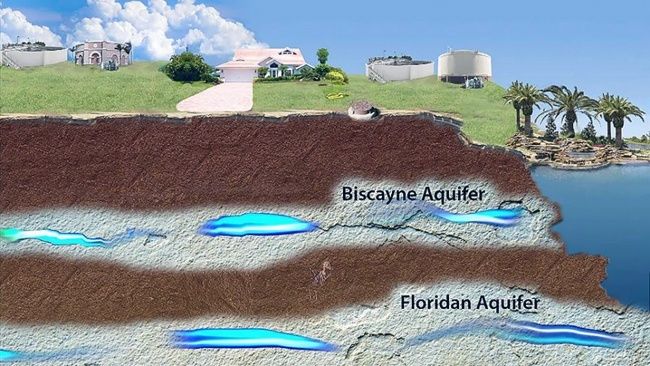 As a result of a 20th-century project to drain nearby swamps, water from the Atlantic Ocean began seeping in to the Biscayne Aquifer, Miami’s main source of freshwater. Infographic credit: YouTube

But according to the U.S. Geological Survey, the essential Biscayne Aquifer, which provides water to the Miami–Dade County area, is falling victim to saltwater intrusion from the Atlantic Ocean. Despite the heavy rains replenishing the aquifer year-round, if enough saltwater enters, all of it will become unusable.

The problem arose in the early 20th century, after swamps surrounding the city were drained. Osmosis essentially created a giant sucking effect, drawing the Atlantic into the coastal soils. Measures to hold the ocean back began as early as the 1930s, but seawater is now bypassing the control structures that were installed and leaking into the aquifer. The USGS has made progress mapping the sea water intrusion, but ameliorating it seems a ways off. “As sea level continues to rise and the demand for freshwater increases, the measures required to prevent this intrusion may become more difficult [to implement],” the USGS noted in a press release.