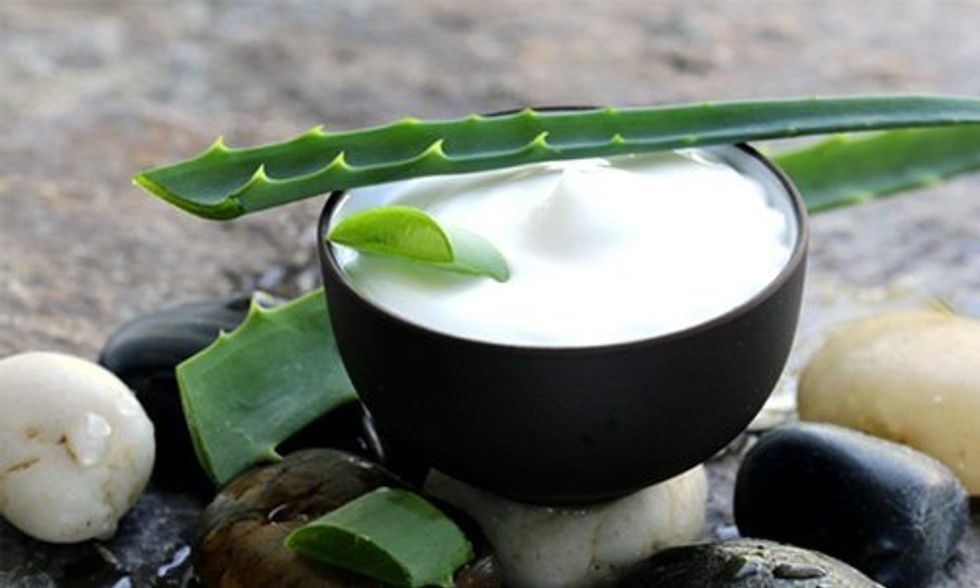 Aloe vera is a popular medicinal plant that has been used for thousands of years.

Here are eight health benefits of aloe vera that are supported by science.

It is best known for treating skin injuries, such as burns and sores, but may also have several other therapeutic properties.

Aloe vera is a thick, short-stemmed plant that stores water in its leaves.

It is widely used in the cosmetic, pharmaceutical and food industries, and has an estimated annual market value of $13 billion globally (1).

Aloe vera is well recognized by its thick, pointed and fleshy green leaves, which can grow to about 12-19 inches in length.

Each leaf is full of a slimy tissue that stores water, which makes the leaves thick. This slimy, water-filled tissue is the “gel" we associate with aloe vera products.

The gel contains most of the bioactive compounds in the plant, including vitamins, minerals, amino acids and antioxidants.

Bottom Line: Aloe vera is a popular medicinal plant that is used in the cosmetic, pharmaceutical and food industries. Its leaves are full of a “gel" that contains numerous beneficial compounds.

Antioxidants are important for health.

These polyphenols, along with several other compounds in aloe vera, can help inhibit the growth of certain bacteria that can cause infections in humans (2).

Aloe vera is most commonly used as a topical medication, rubbed onto the skin rather than eaten.

It has long been known as a treatment for sores, particularly burns, including sunburns.

In fact, the Food and Drug Administration first approved aloe vera ointment as an over-the-counter medication for skin burns back in 1959.

Studies suggest that it is an effective topical treatment for first- and second-degree burns.

A review of four experimental studies found that aloe vera could reduce the healing time of burns by around nine days compared to conventional medication (3).

The evidence for aloe vera helping to heal other types of wounds is inconclusive (4).

Bottom Line: Applying aloe vera to burn wounds appears to accelerate the healing process. The evidence is inconclusive for other wound types.

Tooth decay and diseases of the gum are very common health problems.

One of the best ways to prevent this from happening is to reduce the buildup of plaque (bacterial biofilms) on the teeth.

After four days of use, the aloe vera mouth rinse was found to be just as effective as chlorhexidine in reducing dental plaque (5).

Another study found similar benefits of aloe vera mouth rinse when used over a 15- to 30-day period (6).

Aloe vera does this by killing the plaque-producing bacterium Streptococcus mutans in the mouth, as well as the yeast Candida albicans (7).

Many people have experienced mouth ulcers, or canker sores, at some point in their lives.

They usually form underneath the lip, inside the mouth, and last for about 7-10 days.

Studies have convincingly shown that aloe vera treatment can accelerate the healing of mouth ulcers.

In a seven-day study of 180 people with recurrent mouth ulcers, an aloe vera patch applied to the area was effective in reducing the size of the ulcers (8).

However, it did not outperform the conventional ulcer treatment, which is corticosteroids.

In another study, aloe vera gel not only accelerated the healing of mouth ulcers, it also reduced the pain associated with them (9).

Bottom Line: Application of aloe vera, either as a patch or gel, has been shown to aid in the recovery of mouth ulcers (canker sores).

Aloe vera has often be used to treat constipation.

This time it is not the gel, but the latex, that provides the benefits.

The latex is a sticky yellow residue found just under the skin of the leaf.

The key compound responsible for this effect is called aloin, or barbaloin, which has well-established laxative effects (10, 11, 12).

However, some concerns have been raised about safety issues with frequent use. For this reason, aloe latex has not been available in the U.S. as an over-the-counter medication since 2002.

Contrary to popular belief, aloe vera does not appear to be effective against other digestive disorders, such as irritable bowel syndrome (IBS) and inflammatory bowel disease (IBD) (13, 14, 15).

Bottom Line: Aloe vera latex has strong laxative effects, making it useful to treat constipation. It does not appear to be beneficial for other diseases of the digestive tract.

There is some preliminary evidence that topical aloe vera gel can slow aging of the skin.

In one study of 30 women over the age of 45, topical application of the gel was shown to increase collagen production and improve skin elasticity over a 90-day period (16).

Another study found that aloe vera reduced erythema (redness of the skin), but was also found to dehydrate skin cells (17).

There is very little evidence that aloe vera can treat skin conditions like psoriasis and radiation dermatitis (18).

Bottom Line: Early evidence suggests that Aloe vera may have anti-aging effects on the skin, but more research is needed.

Aloe vera has sometimes been used as a traditional diabetes remedy (19, 20).

It is said to enhance insulin sensitivity and help improve blood sugar management.

However, the quality of these studies was fairly poor, so it is definitely premature to recommend aloe vera for this purpose.

Additionally, there have been some cases of liver damage reported with long-term ingestion of aloe vera supplements (24).

Aloe vera definitely has some unique therapeutic properties, especially when applied as an ointment for the skin and gums.

5 Omega-Rich Seeds You Should Include in Your Daily Diet