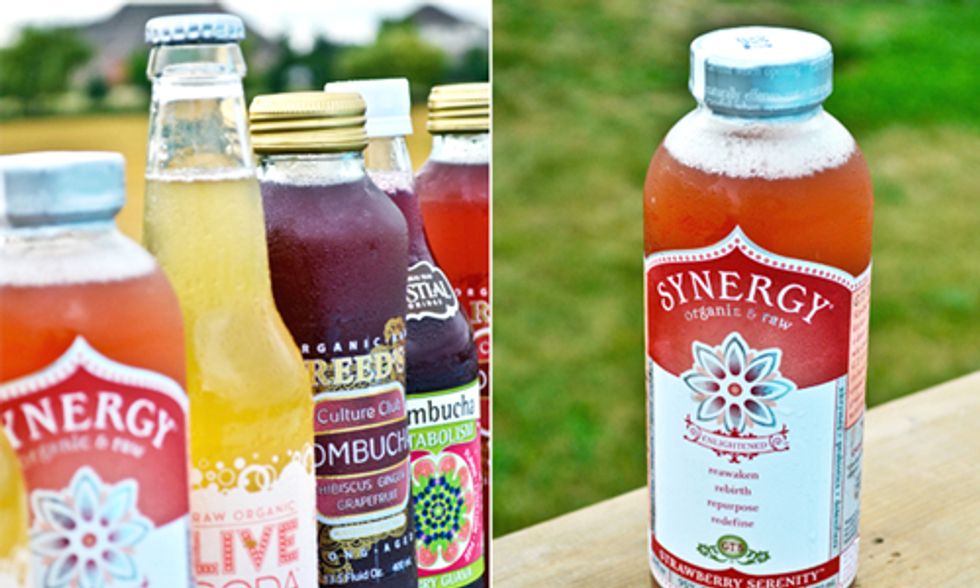 Kombucha is a fermented tea that has been consumed for thousands of years.

Not only does it have the same health benefits as tea, but it's also rich in beneficial probiotics.

Kombucha is a type of tea that has been fermented. This makes it a good source of probiotics, which have many health benefits. Photo credit: peace.love.quinoa.

Here are the top eight health benefits of kombucha, based on scientific evidence.

1. Kombucha is a Rich Source of Probiotics

Kombucha is thought to originate in China or Japan.

It's made by adding specific strains of bacteria, yeast and sugar to black or green tea and then allowing it to ferment for a week or more (1).

During this process, the bacteria and yeast form a mushroom-like blob on the surface, which is why kombucha is also known as “mushroom tea."

This blob is actually a living symbiotic colony of bacteria and yeast or a SCOBY and can be used to ferment new kombucha.

The fermentation process produces vinegar and several other acidic compounds, trace levels of alcohol and gases that make it carbonated (2).

A large amount of probiotic bacteria is also produced during fermentation (3).

Probiotics provide your gut with healthy bacteria. These bacteria can improve many aspects of health, including digestion, inflammation and even weight loss.

For this reason, adding probiotics foods like kombucha to your diet can improve your health in many ways.

Bottom Line: Kombucha is a type of tea that has been fermented. This makes it a good source of probiotics, which have many health benefits.

Green tea is one of the healthiest beverages on the planet.

This is because green tea contains many bioactive compounds, such as polyphenols, which function as powerful antioxidants in the body (4).

Bottom Line: Kombucha made from green tea has many of the same health benefits and may help with weight loss, blood sugar control and more.

Antioxidants are substances that fight free radicals, reactive molecules that can damage your cells (12, 13).

Antioxidants from foods and beverages are much better for your health than antioxidant supplements (14).

Kombucha, especially when made with green tea, appears to have powerful antioxidant effects on the liver.

Unfortunately, there are no human studies on this topic, but it does seem like a promising area of research for people with liver disease.

Bottom Line: Kombucha is rich in antioxidants and has been shown to protect the liver from toxicity, at least in rats.

One of the main substances produced during the fermentation of Kombucha is acetic acid, which is also abundant in vinegar.

Like the polyphenols in tea, acetic acid is able to kill many potentially harmful microorganisms (19).

Kombucha made from black or green tea appears to have strong antibacterial properties, particularly against infection-causing bacteria and Candida yeasts (20).

One study of chickens found that kombucha had antimicrobial effects and similar growth-promoting effects as antibiotics (21).

The researchers even suggested that kombucha tea could be used as an alternative to the antibiotic growth-promoters typically fed to these chickens.

Bottom Line: Kombucha is rich in tea polyphenols and acetic acid, which have both been shown to kill harmful bacteria.

Heart disease is the world's leading cause of death (22).

Rat studies find that kombucha can greatly improve two markers of these diseases, LDL and HDL cholesterol, in as little as 30 days (23, 24).

In fact, green tea drinkers have up to a 31 percent lower risk of developing heart disease, a benefit that should also be seen from drinking kombucha (28, 29, 30).

Bottom Line: Kombucha has been shown to improve LDL and HDL cholesterol levels in rats. It may also protect against heart disease.

A study in diabetic rats found that kombucha slowed down the digestion of carbs, which reduced blood sugar levels. It also improved liver and kidney function (23).

Kombucha made from green tea is likely to be even more beneficial, as green tea itself has been shown to reduce blood sugar levels (31).

In fact, a review study of almost 300,000 individuals found that green tea drinkers had an 18 percent lower risk of becoming diabetic (32).

7. Kombucha May Help Protect Against Cancer

Cancer is one of the world's leading causes of death. It is characterized by cell mutation and uncontrolled growth.

In test-tube studies, kombucha helped prevent the growth and spread of cancerous cells, due to its high concentration of tea polyphenols and antioxidants (33, 34).

How the anti-cancer properties of tea polyphenols work is not well-understood.

However, it's thought that the polyphenols block gene mutation and the growth of cancer cells, while also promoting cancer cell death (35).

For this reason, it is not surprising to see that tea drinkers are much less likely to develop various types of cancer (36, 37, 38).

Bottom Line: Test-tube studies have found that kombucha has significant anti-cancer properties, much like green tea.

8. Kombucha Is Healthy When Made Properly

Kombucha is a probiotic-rich tea with many health benefits.

You can purchase it in the store or make it yourself at home. However, be very careful to prepare it properly.

Contaminated or over-fermented kombucha can cause (and has caused) serious health problems and even death. Homemade kombucha may also contain up to 3 percent alcohol (2, 39, 40, 41).

The safer option is to buy kombucha at a store or online. Commercial products are good and considered alcohol-free, as they must contain less than 0.5 percent alcohol (42).

If you're interested in trying kombucha, then Amazon.com has a decent selection available (see here).

However, check the ingredients and try to avoid brands that are high in added sugar.