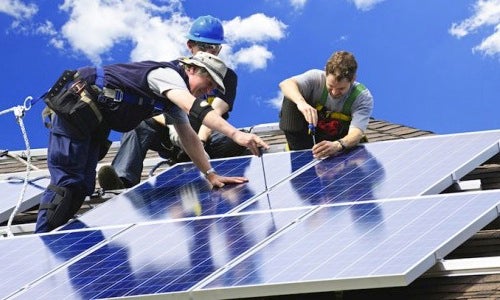 Eight companies, universities and nonprofits have been challenged—and awarded grants—to make it easier for nearly 150 million Americans to go solar.

The U.S. Department of Energy (DOE) announced $12 million in grants today to the organizations as part of the second round of the Rooftop Solar Challenge. The recipients are: Broward County in Florida, California Center for Sustainable Energy, City University of New York, Clean Energy States Alliance, Iowa Economic Development Authority, Mid-America Regional Council (MARC), Optony Inc. and the Washington State Department of Commerce.

The Rooftop Solar Challenge, in its second year, aims to “reduce the cost of rooftop solar energy systems through improved permitting, financing, zoning, net metering, and interconnection processes for residential and small commercial photovoltaic (PV) installations,” according to the DOE. Each awardee has proven the ability to cut the red tape in getting more commercial and residential solar systems in their region. Now, the challenge is for each winner to help eight “teams” across the country that have the potential for greater solar expansion.

“Today, solar modules cost about one percent of what they did 35 years ago, and permitting and interconnection are an increasingly large portion of overall solar system costs,” DOE secretary Ernest Moniz said. “Through the Rooftop Solar Challenge, the Energy Department is helping to make the deployment of solar power in communities across the country faster, easier and cheaper–saving money and time for local governments, homeowners and businesses.” 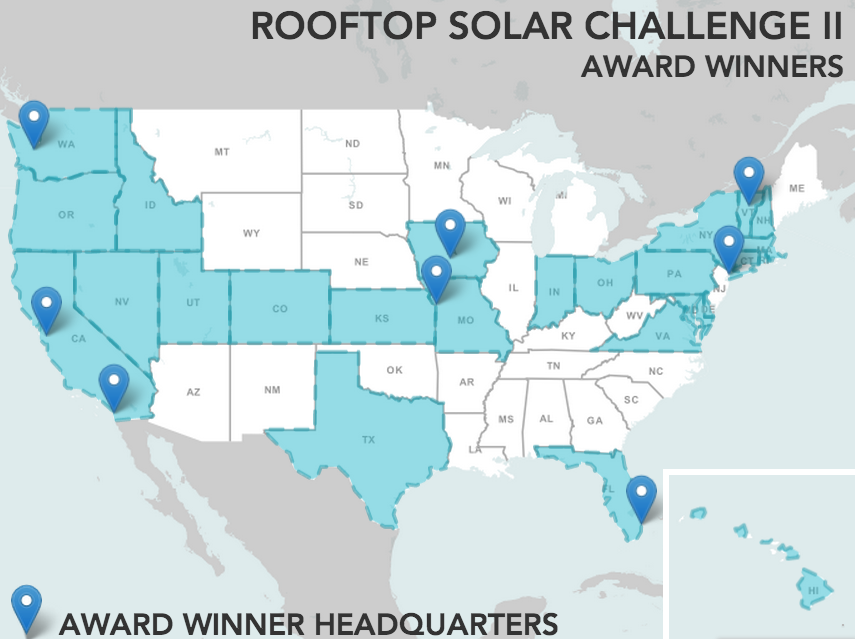 Each pin shows the headquarters of each of the Rooftop Solar Challenge recipients. The blue-colored states have been assigned to the awardees for the Challenge. Click the map to learn about the winners and the states they will be representing. Graphic credit: U.S. Department of Energy

The eight teams announced today will help further expand the reach of innovative strategies that are making it easier, faster and cheaper for more homeowners and businesses to finance and install solar systems, according to the DOE. These awardees will develop and replicate creative solutions that help standardize complicated permitting and interconnection processes that often vary from jurisdiction to jurisdiction; facilitate easy, cheaper bulk purchasing; and support user-friendly, fast online applications.

Here are three of the eight grant awardees that can impact the most people, according to the DOE:

The DOE awarded the representatives of 22 regional teams during the first round of the Challenge in 2012 to reduce the soft costs of solar installation. The agency said those efforts helped cut permitting time by 40 percent while reducing fees by more than 10 percent making it faster and easier for more than 47 million Americans to install solar systems. The representatives created group purchasing programs to drive down costs and streamlined the permit process by instituting online systems in communities that lacked them.