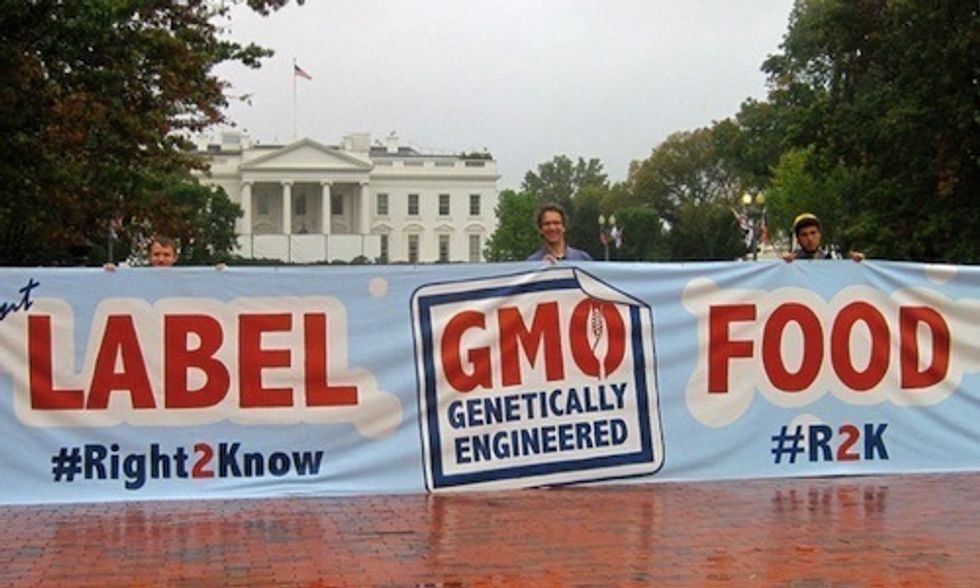 As the food fight over the labeling of genetically modified organisms (GMOs) stalls in Congress, state-level GMO mandates are gaining steam. At least 30 states have introduced some type of legislation in recent years, including three states—Connecticut, Maine and Vermont—that have actually passed GMO labeling mandates.

With the food transparency movement escalating nationwide, there are at least eight states to keep on our radar, according to Politico's Morning Agriculture blog.

Deep-pocketed agribusinesses have fought hard to stop states from issuing mandatory labeling laws for foods containing GMOs, even though labeling is already done in
64 other countries around the world and 89 percent of Americans voters are in support of it. Photo credit: Flickr

Legislators have introduced nearly 70 bills since 2011 related to GMOs. The bills cover everything from the labeling of vaccines containing GMOs to prohibiting the sale of GMO salmon to the labeling food and seeds.

Last week, lawmakers debated a bill that would free the state from its 2014 law that requires four contiguous states—Vermont, Massachusetts, New Hampshire and Connecticut—to also enact label laws before triggering their own.

“We want to remove the contingencies to free Maine to act on its own,” the bill’s sponsor, Rep. Michelle Dunphy (D-Old Town) told the Bangor Daily News. “Consumers have the right to choose. I don’t feel it will have a huge impact on how people shop.”

The bill was tabled and will resurface in a work session later this legislative session.

A bill was introduced last September that would require that all foods sold in the state containing GMOs be clearly labeled. According to MA Right to Know, 155 out of 200 state legislators, ­including 126 from the House of Representatives and 29 from the Senate have signed on as co-sponsors to the labeling bill in 2015. The bill is currently sitting with the Joint Committee on Environment, Natural Resources and Agriculture.

Lawmakers are considering at least three bills that would require GMO foods to be labeled. Politico reports that the first bill requires all food businesses with more than $500,000 of gross sales to post signs informing consumers of GMO food products unless it is already labeled. The second measure requires milk and milk products from genetically engineered animals or that contain a GMO ingredient to carry a label. The third measure would require all GMO products be labeled by Jan. 1, 2017.

Following years of grassroots campaigning, state Senator Maria Sachs and state Rep. Michelle Rehwinkel Vasilinda have introduced three GMO labeling bills in Florida: Senate bills SB 1700 and SB 1708, and House bill HB 1369, Natural Society reported. The bills require labeling of GMO foods and raw agricultural commodities, and require the state to provide lists of raw agricultural commodities at high risk or potentially at risk for cultivation in a genetically engineered form. The two have campaigned heavily for GMO labeling for the past three years. Here's a video of Senator Sachs at an anti-Monsanto rally in Miami in March 2013.

The state already requires the labeling of GMO salmon, and now the state is weighing a measure that would ban the sale of any GMO fish or fish product in the state and another resolution that would disapprove of the U.S. Food and Drug Administration’s (FDA) approval of AquAdvantage salmon, Politico reported. U.S. Senator Lisa Murkowski has long been vehemently opposed the FDA's controversial decision and recently threatened to block the appointment of the next FDA commissioner, Dr. Robert Califf, because of it.

Two bills related to labeling genetically engineered foods have been introduced in the Missouri legislature. The first requires the labeling of GMO foods. The second calls for the use of science-based data to assess and regulate of modern agricultural technologies. Right to Know Missouri cited a poll taken in Missouri that indicated 91.1 percent of people supported enacting a GMO labeling law.

The bill to label genetically engineered foods would require products to be labeled six months following enactment of the measure. The state Senate is set to consider this legislation.

In 2014, Connecticut and Maine became the first two states to require GMO labels but their rules will only kick in after other states enact similar laws. Vermont, however, set a precedent with the passage of the first-ever no strings attached labeling mandate that's set to go into effect this July—that is, unless Big Food stops it.

As EcoWatch exclusively reported in October, the Grocery Manufacturers Association—which represents more than 300 food and beverage titans such as ConAgra, Nestlé, Coca-Cola, Pepsi, Kellogg and Hershey—has spent millions and lobbied heavily to nullify or preempt state labeling laws. A spokesperson told us that the association “supports a uniform national standard for GMO labeling ... not a patchwork of different state labeling mandates that are confusing and costly to consumers.”

In a blow to the industry, however, Congress voted in December to not include a policy rider in the federal omnibus spending bill that would have blocked states from implementing mandatory GMO labeling laws.

Following the decision, Sec. of Agriculture Tom Vilsack held a closed-door meeting earlier this month with food industry honchos and GMO labeling advocates to hammer out a compromise.

Few details have emerged from the meeting but it appears that Big Food's proposal of a "Smart Label," which consists of a scannable QR code, has been shunned by opponents.

Politico reported Thursday that Tara Cook-Littman, founder of GMO-Free Connecticut, says she and four other advocates "stood strong and united for mandatory, on package GMO labeling."

"We are thankful to Secretary Vilsack for the time he spent with us, but in the end, there was not enough common ground to emerge from that room with a GMO Labeling proposal agreed upon by leaders from both camps," Cook-Littman wrote in a blog post on the website of Citizens for GMO Labeling.