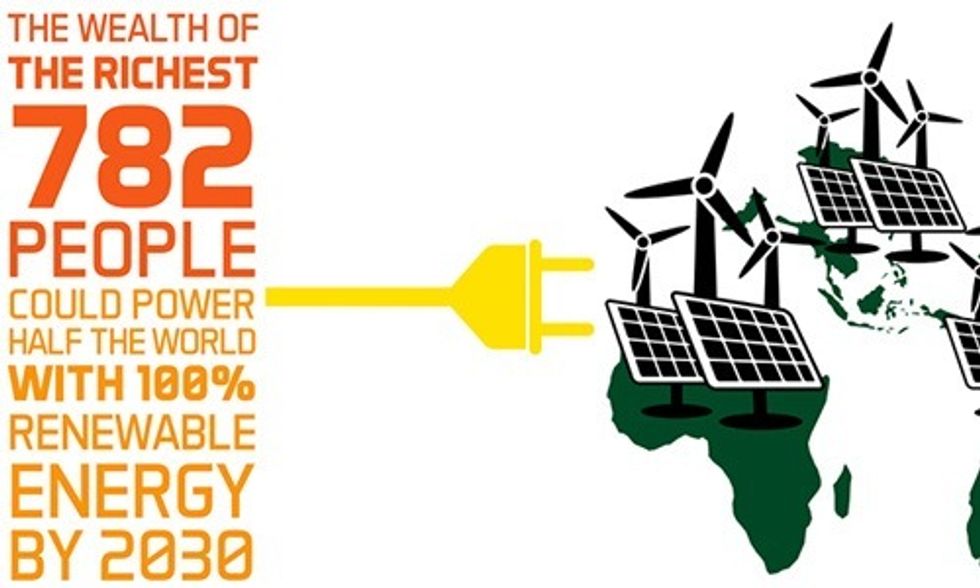 The personal fortunes of the 782 wealthiest people on the planet, many CEOs of major corporations, could power Africa, Latin America and most of Asia with 100 percent renewable energy by 2030, said Friends of the Earth International in a new report released today.

Launched seven days before the UN climate summit in Paris, the report illustrates that the finance for an energy revolution certainly exists, while the political will to drive the transformation is so far shockingly absent.

Some of the key finding of the report, An Energy Revolution is Possible, include:

“This report is a wake up call for policy makers and governments. Our world faces two destructive and entwined crises—growing inequality and climate change. The time has come to address them together,” said Sam Cossar-Gilbert of Friends of the Earth International.

Climate change is already happening—wreaking devastation on communities and ecosystems around the world. Without urgent and drastic action to reduce global greenhouse gas emissions, we face far worse runaway climate change, with impacts that would dramatically overshadow anything we see today and affect predominantly the poorer people and nations, which are the least responsible for climate change.

Energy production from fossil fuels is one of the main contributors to sky-high levels of carbon emissions and tackling it is central to stopping a climate disaster.

The comparisons with individual wealth are used as a stark reminder that the finance for halting dangerous climate change is certainly available. The report does not suggest that the wealth of some individuals can or should be directly used to drive the needed energy transformation.