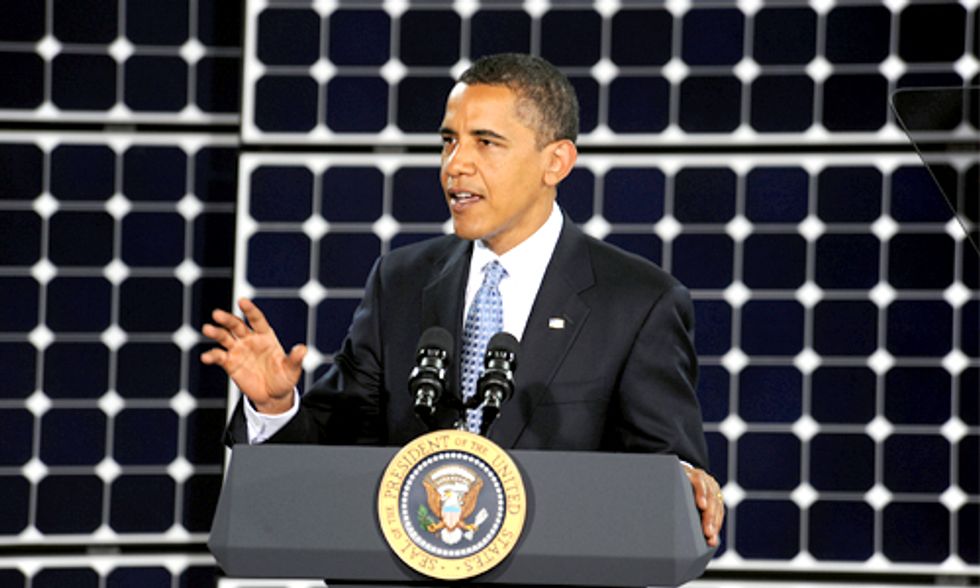 Today, there are nearly 17,000 veterans of the U.S. Armed Forces who are working in the solar energy industry. Well, that number is about to grow substantially.

In a decision that’s certain to help to speed up America’s transition to a clean energy future, President Obama announced today that the Department of Energy (DOE) will launch a new initiative to train 75,000 Americans—including military veterans—to enter the solar workforce by 2020. The President made the announcement at Hill Air Force Base in Utah as part of a roundtable discussion on clean energy technology and workforce training with Sen. Orin Hatch, Congressman Rob Bishop and Salt Lake City Mayor Ralph Becker.

President Obama continues his support for solar energy. In the picture above, President Obama is addressing an audience of more than 450 people at the Nellis Solar Power Plant in 2009. Photo credit: Wikipedia

This new initiative will provide a big boost to the U.S. economy, while also helping to maintain solar energy’s explosive jobs growth. I’ll make this promise: With stable public policies in place, we will not only meet the President’s goal of adding 75,000 new solar jobs in America by 2020, but we will blow past it!

Today, the solar industry already employs 174,000 workers nationwide—more than tech giants Apple, Google, Facebook and Twitter combined—and pumps nearly $18 billion a year into our economy. This remarkable growth is due, in large part, to smart and effective public policies, such as the solar Investment Tax Credit (ITC), Net Energy Metering (NEM) and Renewable Portfolio Standards (RPS). By any measurement, these policies are paying huge dividends for both our economy and environment.

According to The Solar Foundation’s 2014 National Jobs Census, the solar industry in America is becoming increasingly diverse, with minorities, women and veterans representing a growing percentage of the workforce. Over the past five years alone, the industry has added more than 80,000 new employees—an increase of 86 percent.

Also, as part of today’s announcement, the White House will work to make G.I. Bill funding available to support solar workforce training. Dating back to 1944, the G.I. Bill has been widely hailed by historians as one of America’s most successful economic and political programs.

With approximately 200,000 U.S. servicemen and women leaving the military each year, much more needs to be done to help them find civilian jobs and meaningful workforce training. As an industry, we are uniquely positioned to help. Record-breaking growth in solar energy installations nationwide requires a growing and skilled solar workforce. We applaud the President and his administration for undertaking this new initiative, and we’re prepared, and excited, to do our part to help. We look forward to more and more of our military veterans becoming solar veterans, too!

The White House’s new workforce training initiative closely tracks U.S. public opinion. A new Gallup Poll shows that 91 percent of Americans want to see more emphasis, or the same emphasis as today, on producing solar energy. Compared to oil, natural gas, coal, nuclear and other renewables, solar was the only energy source to show an increase in public favorability when compared to results of a similar nationwide poll taken by Gallup in 2013.

Today, there are 20 gigawatts (GW) of installed solar capacity in the U.S.—enough to power more than 4 million homes—with another 20 GW projected to come online by the end of 2016. What’s spurring this rapid growth? For one thing, solar energy is now more affordable than ever. According to SEIA/GTM Research, national blended average system prices have dropped 53 percent since 2010.

Every 2.5 minutes of every single day, the U.S. solar industry is helping to fight climate change by flipping the switch on another completed solar project. We’re proud that solar accounted for one-third of all new electric generation capacity last year in the U.S. And, frankly, we’re just scratching the surface of our industry’s enormous potential. As the old saying goes, the sky’s the limit.

Deutsche Welle
Health + Wellness
Fall is with us and winter is around the corner, so the season for colds and flu has begun — joining COVID-19. monstArrr / Getty Images

Just as scientists are scoring successes in coronavirus research, new problems are on their way. Fall is with us and winter is around the corner, so the season for colds and flu has begun — joining COVID-19.