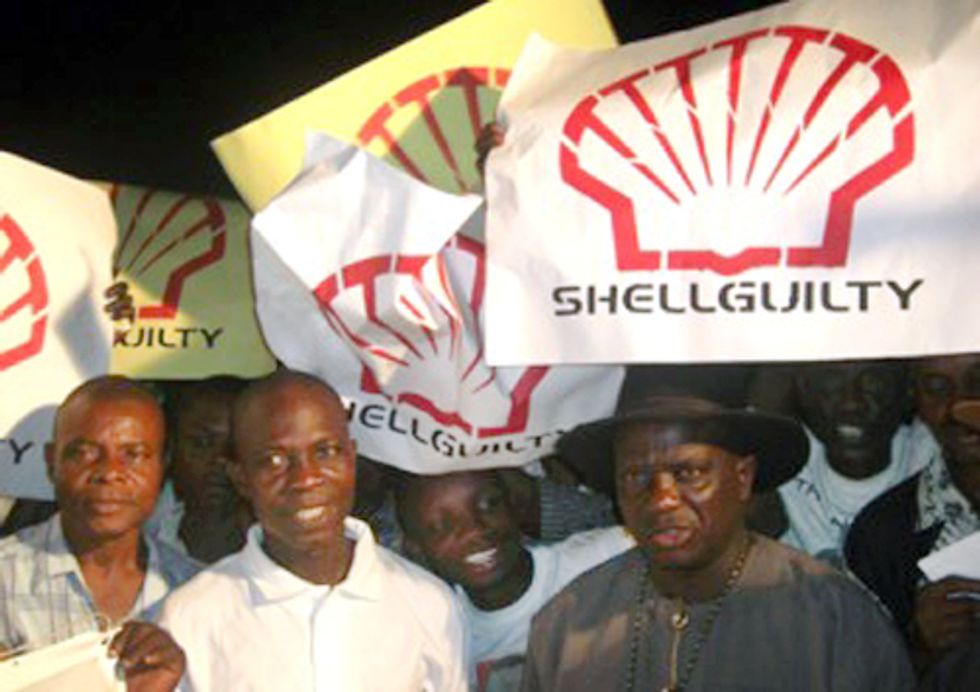 Early Monday morning, 71,010 Shell employees received an email from the company's "Grassroots Employee Empowerment Division" providing information on Kiobel v. Royal Dutch Petroleum, a pivotal human rights case being argued in the U.S. Supreme Court this month. The email contained links to news stories, as well as a tool to help employees tweet their feelings about the case at key U.S. news anchors and Oprah Winfrey.

The only thing is, Shell has no "Grassroots Employee Empowerment Division," and they don't want publicity for the case. The email was in fact the work of an activist group called People Against Legalizing Murder (PALM), who received the list of Shell emails from what they believe to be a group of disaffected employees. (A similar leak occurred two years ago.)

Within minutes of the email being sent out, Shell internally blocked the site, preventing employees from accessing it. "I would love to participate, but access is denied to all links you sent out," wrote one employee among many. The 71,010 employees were informed this morning of the situation and the site's new URL.

PALM intended the action to help shine a spotlight on the case, brought by the widow of Dr. Barinem Kiobel, who was hanged along with novelist Ken Saro-Wiwa for opposition to Shell's drilling plans in West Africa. Shell is alleged to have aided paramilitary forces that raided more than 60 villages, killed more than 800 people and displaced 30,000 more.

To prevail, Shell lawyers must overturn a 200-year-old law, the Alien Tort Statute (ATS), that compensates victims of international crimes. (The law has been used to compensate Holocaust survivors who sued for restitution from corporations that profited from slavery and forced labor during World War II). Shell's lawyers are arguing that their corporation is not subject to the ATS because it is not a person.

"When it comes to things like election spending, Shell and other corporations want to have all the rights of people," said Sean Dagohoy from PALM. "But when accused of murder, Shell conveniently argues that they aren't a person. A ruling in their favor would be a very dangerous precedent, and would badly undermine the United States' reputation as a place that cares about human rights. That's why we attempted to reach out to Shell employees to help get the word out."

"Surely most Shell employees, like most people, don't want multinationals to get away with murder just because murder's convenient," said Andy Bichlbaum of the Yes Lab, which provided technical assistance for the action.

"Shell needs to let its employees speak," said Mike Bonanno of the Yes Lab. "They can prevent it for a day, but in the long run they have no choice.

WHAT YOU CAN DO

Shell employees may never be able to visit this site while at work, but you can stand in for them by raising the issue with a key journalist. First, select a journalist: