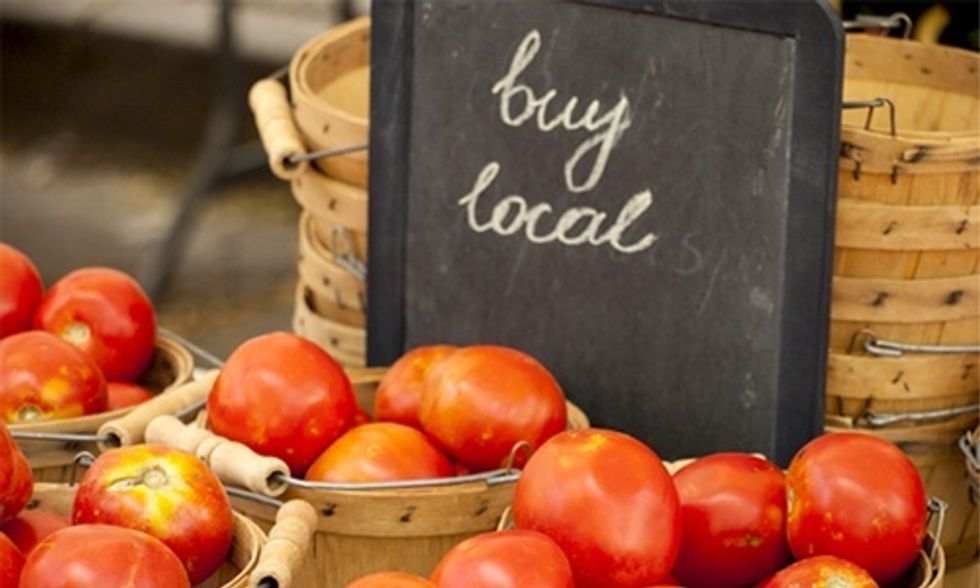 One of the easiest and most powerful ways we can make a difference is through our decisions as consumers. What we choose to buy not only says a lot about who we are and what kind of values we have, but also has many cumulative repercussions, from helping to shape corporate and public policy to affecting animal welfare, public health, social justice and the global environment.

When it comes to shopping for sustainably sourced food, your best bet would be head to the nearest farmers' market.
Photo credit: Shutterstock

An ad for BuyPartisan, an iPhone app that scans bar codes to reveals whether any given product is made by Republicans or Democrats, puts it succinctly: "We vote everyday with our wallets."

And one of the best ways to vote with our wallets is through our grocery shopping. According to a 2014 Gallup poll on consumer spending, Americans are opening up those wallets more for groceries than for other household essentials. Fifty-nine percent of Americans reporting increased spending on food shopping, ahead of spending on gasoline (58 percent), utilities (45 percent), healthcare (42 percent) and rent or mortgage (32 percent).

According to Progressive Grocer Magazine, supermarkets made more than $638 billion in sales in 2014. Clearly, as long as money talks, grocery shopping remains an ideal opportunity to "cast your vote" in numerous ways. Here are seven ways to help transform your grocery list into a ballot for positive change.

It's a good instinct to seek out organic products over non-organic ones. Unfortunately, the word "organic" is problematic. If a product has the "100 percent organic" label, it means that is passes the U.S. Department of Agriculture's (USDA) definition: meat, eggs and dairy are antibiotic- and hormone-free; animals are raised in living conditions that permit them to engage in natural behaviors (like grazing on pasture); produce is made without fertilizers that are synthetic or have sewage components; and no genetically modified ingredients. But the USDA's certification permits certain pesticides and herbicides, and also allows five percent of the ingredients to be non-organic, meaning that food producers can add some 200 non-organic substances to their products and still get the USDA's organic stamp.

When it comes to imported foods labeled organic, the issue is even thornier. For these products, "an extended bureaucratic chain increases the opportunities for fraud and lax enforcement, especially when food is imported from places rife with corruption, such as Ukraine and Kazakhstan," says Peter Laufer, a journalism professor at the University of Oregon and author of Organic: A Journalist’s Quest to Discover the Truth Behind Food Labeling.

For organic purists, the USDA label isn't enough, and there is no other regulated third party certification. So getting something that is actually "100 percent organic" isn't always possible. But though the term "organic" is conflicted, it is still most often a better choice to go organic over non-organic foods. Your best bet would be to support your local organic farmer at the nearest farmers' market: Not only will you be helping your local economy, which benefits you in the long run, you will be choosing foods that didn't require too much transportation to get to you (and therefore, less carbon emissions) and also supporting local farmers instead of Big Ag corporations and multinational food conglomerates.

As the organic markets mature, hopefully a better certification process will be developed. But a big hurdle remains cost effectiveness: In many cases, organic food is costlier to make, and thus pricier, than their traditional counterparts. Hopefully, the surging consumer demand will inspire more farmers to convert from conventional to organic farming, which could bring organic prices down.

A 2014 Gallup poll found that 45 percent of Americans actively seek out organic foods, 38 percent say they "don't think either way" about organic and 15 percent actively avoid them. For many farmers, food producers and distributors, the organic-seekers represent a potential customer base that too big to ignore. Clearly, there is a huge demand for food that is free from man-made additives like from antibiotics and pesticides, and is produced in a way that is better for the environment. And with younger people more likely than older people to eat organic, that segment of the market will likely grow. (Last year was the first year that Gallup asked about eating organic foods in their annual Consumption Habits survey, so it will be interesting to follow this trend in subsequent surveys.)

When it comes to product packaging, convenience comes with a hefty environmental price. Much less plastic is used for a gallon jug of water versus 16 eight-ounce bottles. (And anyway, plastic water bottles of any size should be avoided at all costs; refill a steel water bottle with a Brita instead.)

"While it may seem easier to get individually wrapped snacks and beverages, that convenience is adding to the over 60 million tons of paper, plastic and glass packaging thrown away in the U.S. every year," according to Green Home.

Look for products with minimal packaging, choosing paper over plastic as the lesser of two evils. Buy in bulk and then transfer the products into smaller, more convenient reusable containers at home.

Plastic pollution is an increasing nightmare for ecosystems around the globe—just look at the Great Pacific garbage patch. "Until we shut off the flow of plastic to the sea, the newest global threat to our Anthropocene age will only get worse," says Charles J. Moore, a captain in the U.S. merchant marine and founder of the Algalita Marine Research and Education Institute in Long Beach, California.

Plastic bags are particularly troublesome. Lightweight and easily carried by the wind, they easily end up in rivers and oceans, where they wreak havoc on wildlife, killing sea birds, sea turtles, fish and marine mammals. They also clog landfills and leach toxins into the soil and water. A single plastic bag can take 500 years or more to degrade.

Though some cities and states have initiated fees or banned altogether the use of plastic bags, Americans still use and discard 100 billion plastic bags every year, which requires 12 million barrel of oil to produce and cost retailers $4 billion.

Instead of bringing new plastic bags home, reuse old ones or bring some reusable cloth bags with you when you do your shopping.

Animals make up a large part of the food system. More than 8 billion land animals and 56 billion sea animals were killed to feed Americans in 2011 alone. And the vast majority of those land animals—cattle, pigs, chickens, turkeys, ducks and rabbits —suffered greatly for their entire lives before they were killed. Of course, the best way to avoid animal cruelty in your diet is to go vegan.

But if you've got to have animal products on your plate—and the many fake meat options just don't cut it—you can help reduce that suffering by choosing products that have animal welfare certification. As a general rule, avoid any processed meat and animal products from factory farms. Choose local and organic; chances are your local farmer's chickens have spent a good amount of their lives actually being chickens, pecking at worms in the the grass and sun, not trapped in dark warehouses with no access to the outdoors and sleeping in their own feces.

The human appetite for fish combined with skyrocketing human population has resulted in overfishing, one of the biggest threats to the world's oceans.

"Today, 90 percent of the world's fisheries are either fully exploited, overexploited or have collapsed," according to the Monterey Bay Aquarium. "The global fishing fleet is operating at 2.5 times the sustainable level—there are simply too many boats chasing a dwindling number of fish."

To help consumers make ethical seafood choices, the Monterey Bat Aquarium has created an online Sustainable Seafood Search. Also available as app, it can tell you, for example, which is the best kind of tuna to buy (troll- or pole-caught albacore tuna from the U.S. North Pacific) and which is the worst (longline-caught albacore tuna from the South Atlantic). The nonprofit Marine Stewardship Council has created a similar online resource, the Sustainable Seafood Product Finder, which identifies fisheries that are helping to protect the world's oceans.

Of all the meats, red meat is the worst for the environment: According to a Bard College study, raising cows requires 28 times more land and 11 times more water than raising pigs or chickens. “The biggest intervention people could make towards reducing their carbon footprints would not be to abandon cars, but to eat significantly less red meat,” said Tim Benton, a professor of population ecology at Leeds University and UK Global Food Security Champion.

Then there's the health benefit of eating less meat. A National Cancer Institute study of 500,000 people found that those who ate the most red meat daily were 30 percent more likely to die of any cause during a 10-year period than were those who ate the least amount of red meat. Those who ate primarily poultry or fish had a lower risk of death. The mounting evidence that people who eat less meat, especially red and processed meats, tend to be more healthy, helped the U.S. 2015 Dietary Guidelines Advisory Committee, the nation's top nutritional advisory panel, recently make the recommendation to stop eating so much meat.

If you normally drive to do you food shopping, consider leaving the car in the garage and doing that shopping online. According to a Carnegie Mellon study, shopping online almost always uses less energy than traveling to a brick-and-mortar store.

"E-commerce is the less energy-consumptive option approximately 80 percent of the time,” according to the report, which cited transporting customers to stores as the single most important factor. Co-author Chris Hendrickson said he was most surprised by how small an impact packaging really has, particularly with the growth of recycling channels for packaging."

Another good option would be to walk or bike to the grocery store. You won't be able to do as much shopping as you would with your car or truck in one trip, but walking and biking have environmental and health benefits that you won't get by sitting behind the wheel.

Shoppers of the world, unite and take over

Dr. John Fleming, chief scientist for Gallup’s Marketplace Consulting and HumanSigma Practices, points out that "consumer spending is the lifeblood of a healthy economy." And because of that, consumers wield a significant amount of influence in steering that economy in terms of which companies and products succeed and which will fail. To be sure, by making responsible, ethical decisions at the cash register we can be the change rather than just getting it.

The Miracle Superfood You’re Not Eating