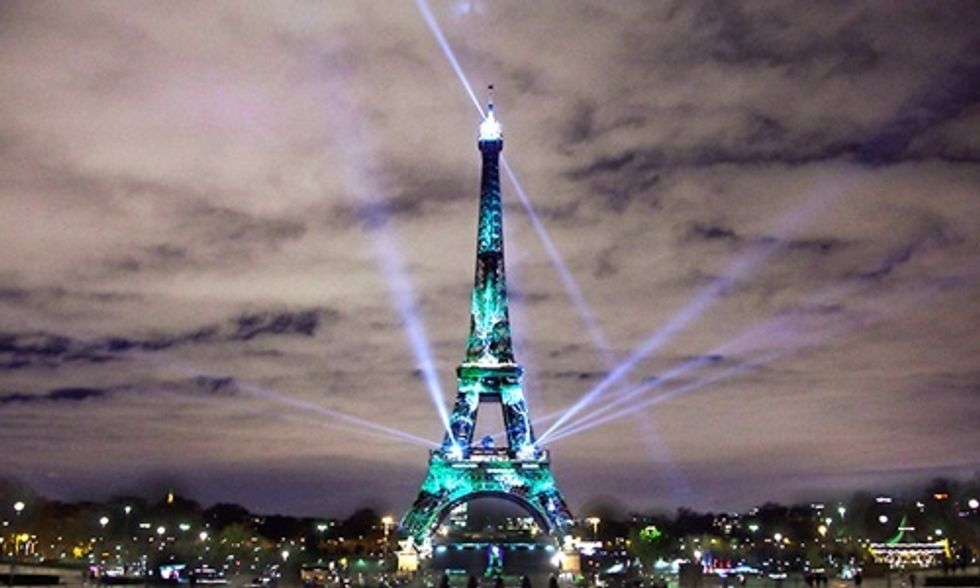 You might be thinking that the UN Paris climate talks, going on now through Dec. 11 will have little bearing on your day-to-day life, but these global climate negotiations are different. The outcome of this conference—what many believe is our last best hope of achieving the binding international agreement we urgently need—will impact you personally, along with billions of people around the world.

The outcome of this conference will impact you personally, along with billions of people around the world.
Photo credit: Shutterstock

1. This is kind of the last chance we have to take concerted global action. We will only succeed in addressing the climate crisis by unifying governments, businesses and citizens to act together.

Since the beginning of the Industrial Revolution, we have been burning fossil fuels and deforesting wide swaths of land to fuel human development. Climate cycles respond very slowly to increasing concentrations of greenhouse gases in the oceans and atmosphere—so the effects we feel today are the result of actions taken decades ago. Even in a hypothetical scenario in which we stop deforesting and no one, anywhere, uses fossil fuels ever again, climate cycles will continue to change for decades. But if global leaders at the UN Paris Climate Talks do not reach an agreement that curbs fossil fuel use in a significant way, the concentration of pollutants and gases will increase the speed of climate change and make the effects of climate change much more violent.

For farmers all over the world, being able to rely on regular weather patterns is crucial. When these patterns change unpredictably, entire crops can be lost. Climate change is already impacting crop yields around the world, especially wheat and coffee.

Beyond unpredictable rains, climate change means generally warmer temperatures, more heat waves and increased risk of droughts, floods and mega-natural disasters—all of which compromise food security and can lead to displaced populations, climate refugees and increased violence. In fact, extended drought is a major contributing factor to the conflict in Syria. Experts predict that persistently low crop yields for staples such as wheat or rice in developing countries could lead to mass migrations and violent conflicts. A successful climate agreement in Paris is important to a stable food supply and therefore to global security.

The Rainforest Alliance works in everything from agriculture to tourism to carbon—but everything always comes back to forests. Protecting forests is at the root of our mission and has been for more than 25 years.

That’s because forests play a crucial role as water and air purifiers, filtering out pollution and sequestering greenhouse gases. They also halt erosion and provide economic opportunities to the communities that live in the forest. And studies show that forests help regulate climate all over the world—so the Amazon rainforest helps control rainfall as far away as California.

When forests are chopped down, the negative effects are twofold. We lose the valuable carbon dioxide-to-oxygen respiration from the trees, while also releasing tons of carbon dioxide that had been stored in the forests. At the UN Paris Climate Talks, the Rainforest Alliance and other like-minded organizations will discuss the importance of land use and how we can keep forests standing to help mitigate climate change.

You may have heard the phrase “ocean acidification” bandied about, but what does it actually mean?

Put simply, the ocean is growing more and more acidic as we continue to burn fossil fuels. The carbon dioxide released by burning these fossil fuels is absorbed into the ocean, where it dissolves into the water and begins to change ocean chemistry.

In more acidic ocean waters, hard-shelled marine organisms like oysters, crabs, snails and teeny tiny zooplankton will have difficulty creating and maintaining their hard shells. The higher pH of the ocean water causes these hard shells to disintegrate, rippling up the food chain and ultimately effecting the larger predatory fish that we eat. When about 12 percent of the world’s population depends on fisheries and aquaculture, that’s a big deal—and you can forget about sushi.

Climate change will affect everyone, everywhere, to some degree, but tropical areas will be hit especially hard. This is bad news for those of us who enjoy food and other commodities that come from the tropics, such as coffee, bananas and cocoa (in other words, everyone).

Farmers in tropical zones are already experiencing those unpredictable weather patterns we mentioned earlier. Warmer, wetter summers have prompted an outbreak of coffee rust, a parasitic fungus that causes entire coffee crops to wither and die. And coffee can only grow within a very specific temperature range—the warmer it gets, the less likely farmers will be able to harvest enough coffee to support themselves and their families. For many coffee farmers whose sole income comes from coffee, the changing climate has already devastated their livelihoods.

Sustainable farming methods can help and an international agreement in Paris could make all the difference in driving agricultural transformation at the scale needed to help farming communities in tropical latitudes.

Developing nations feel the effects of climate change the most. The people who live in this less-developed areas do not have access to the infrastructure or services that offer support in the face of natural disasters, such as drought or intense storms. Rather unfairly, these people live mostly low-emission lives, yet will experience the most intense effects of climate change. Women, children and indigenous communities are especially vulnerable. Gender inequality in parts of the world mean women and their children experience a greater hurdle to climate adaptation. And indigenous communities suffer the loss of natural resources and weather patterns that are foundational to their way of life, leading to lost economic opportunities.

As a part of its Sustainable Development Goals, the UN plans to eradicate extreme poverty, establish gender equality and improve public health in developing nations. Climate stability plays a huge role in reducing poverty and improving health. An agreement at the Paris Climate Talks would be a step toward achieving even bigger social goals.

We’re in this predicament because our predecessors burned fossil fuels and deforested huge areas of land. It’s hard to blame them—for the most part, they didn’t know any better. But we do. It would be tremendously shortsighted for delegates at the UN Paris climate talks to fail to reach an agreement. To do so would amount to a global shrug: “They can deal with it later.” Unfortunately, climate change is not an issue that can be dealt with later—delaying action could only intensify the changes we’re already feeling.