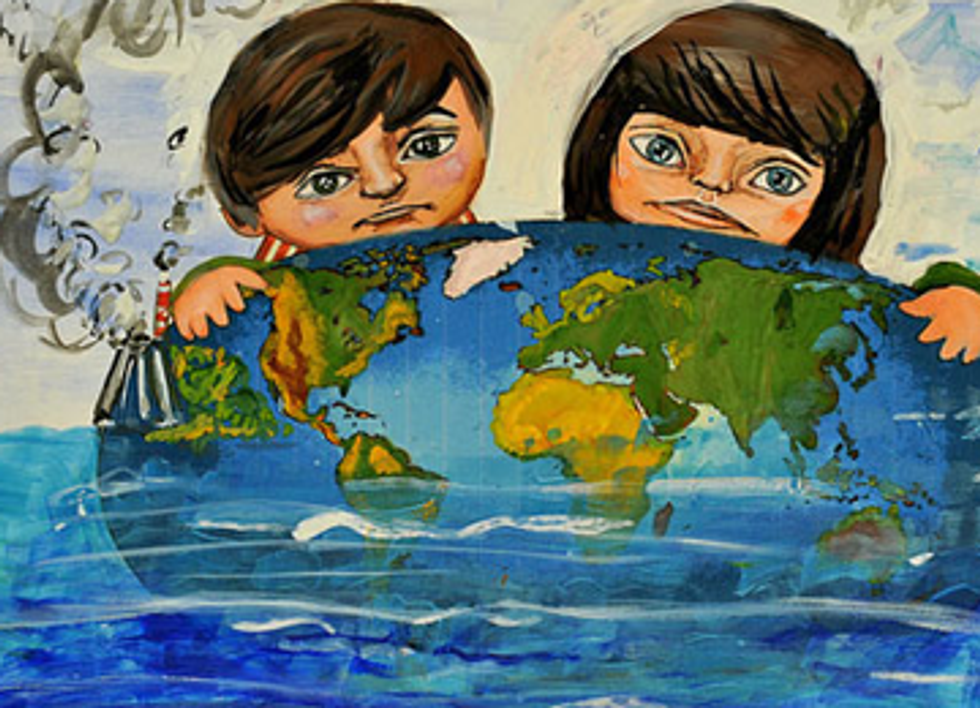 The Nobel Prize-winning Intergovernmental Panel on Climate Change (IPCC) is in the process of finalizing its next report, due to be released in four volumes between Fall 2013 and Spring 2014. These reports, which have come out even seven years over the past several decades, represent the combined consensus views of thousands of climate scientists.

Following the Copenhagen Climate Change talks in Dec. 2009, the United Nations Office in the Russian Federation, together with the Young Peacekeepers Movement, sponsored an art contest called "People in the Face of Climate Change." This is one of the entries.
United Nations Development Program in Europe and Central Asia, Creative Commons, February 2010.

Draft copies of some of the reports are now being leaked. While the IPCC correctly responds to criticism of these as premature, since they are by no means finalized yet, there are some things we can already be certain of.

1. The certainty on the part of the vast majority of climate scientists that global warming is real and is at the very least primarily caused by human action has been growing with each new IPCC report. That trend will continue in the upcoming report. All the criteria for such certainty has long ago passed 90 percent, and just keeps getting confirmed by new scientific study, by extreme weather events in the real world, by unprecedented droughts in many parts of the world, by the increasing acidity of the world's oceans, and much more.

2. Because the IPCC works on the basis of summarizing thousands of other scientific studies, it tends to be both wide-ranging in outlook and also somewhat conservative in its predictions. In each report, seven years apart, the "worst-case" predictions of the previous report have become the "most likely" predictions. This too will continue, as new studies confirm and deepen our collective knowledge about the world's climate system, how it works, how it is interconnected to all other natural systems (water, oceans, soil, plant life, etc.) and how changes in each of these systems affect all the others.

3. It appears that this latest report will include consideration for the first time of the impact on sea levels from the melting of ice in Greenland, predicting even higher sea level increases than in previous reports. However, it still will not include consideration of the impact on climate change of the melting of the permafrost across the top of the Northern Hemisphere. This is important because this melting releases massive amounts of previously frozen methane and carbon dioxide. This can exacerbate global warming caused by direct human interference in the climate, creating a feedback loop that will make greenhouse gas emissions much worse and from a source that humans do not have any control over.

4. As each year passes, it becomes more difficult and more expensive to institute measures to reduce global warming. This creates a political paradox—the more we need such measures, the more proof there is of the reality of climate change, the more time passes, then the measures we need to take become more expensive and more massive, and the political will to do the right thing becomes more difficult. With each step toward certainty, the right-wing cries against reality become more shrill—another trend with no end in sight.

5. We can be certain that at least some of the press coverage of the final report will focus on anything that can be used to downplay the significance of the problem. This report will likely discuss the phenomenon that increases in average air temperatures have slowed over the past few years, and deniers will seize on this to undercut the need for change. But since all the world's natural systems are integrated at every level, average air temperatures, which are still increasing, are only one part of a very complex equation. If you take into account the rapidly increasing acidity of the ocean, which results from the ocean absorbing carbon dioxide, there has been no slowing of the impacts climate change is making on the real world. But some press coverage will focus on any piece which, taken out of context, can be used to make people feel that the situation is not as bad as it really is.

6. Similarly, right-wing efforts to discredit climate change science, in addition to becoming increasingly shrill, also rely on overly simplified nonsense. Every year, when there is still a winter it will be used to claim that "global warming isn't real—we still have winter!" But this ignores how climate change works. It doesn't eliminate seasons, it makes the high temperatures greater. Just because we still have beaches in Florida doesn't mean that sea levels aren't increasing, and that increase will speed up over the coming decades. Right-wingers also focus on what is happening this year or next, to the exclusion of looking at the real long-term trends in the climate. This year may be about the same as last year in terms of the number and intensity of forest fires, for example, but the more than five decade long trend is for more forest fires burning at greater intensities. This winter may or may not be warmer than last year's, but the long-term trend is for Autumn to last longer and Spring to arrive earlier.

7. As many have pointed out, the right-wing attacks on climate science have little or nothing to do with the science itself; they are based on a rejection of what will be required to combat global warming. Government action on a large scale is required, as are restrictions on what businesses can do especially regarding greenhouse gas emissions. When right-wingers sneer at the science, they are really fearful of what will happen to their financial supporters in the fossil fuel industries.

We can predict, with 100 percent certainty, that the upcoming IPCC report will confirm that global climate change is real, it is getting worse, it is caused mostly or entirely by human activity and that we need to act to combat it—to reduce emissions, to adapt to the coming crises a warming world will bring on top of the huge impacts we have already seen.