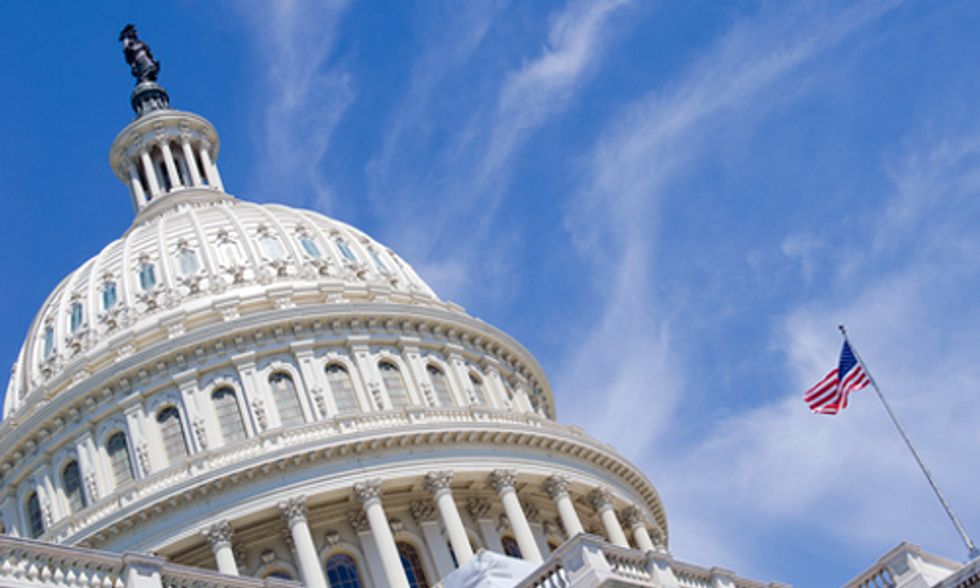 Senate Republican leaders had been eyeing a raft of votes into the wee hours last Friday as a chance to put a spike in the heart of President Obama's plan to confront the dangers of climate change.

Republican leaders continue to oppose the steps we need to take to address mounting threats, and the party has proposed no plan of its own to confront climate chaos.
Photo credit: Shutterstock

Things didn't go quite as planned.

Seven Republicans joined all Senate Democrats in voting to tie climate change to national security and call for action to cut carbon pollution and invest in efficiency and renewable energy. A GOP proposal to stop the president's Clean Power Plan dead in its tracks wasn't even brought up for a vote.

And Senate Majority Leader Mitch McConnell couldn't muster a filibuster-proof majority for a low-bore proposal of his own to encourage states to defy the president's plan to cut carbon pollution from the nation's dirty power plants.

Make no mistake, Republican leaders remain committed to derailing progress on climate change while offering no plan of their own for confronting the central environmental challenge of our time.

They're as determined as ever to push a big polluter agenda to weaken protections for our air, water, wildlife and lands and hamstring the enforcement of common sense safeguards.

There are clear signs, though, that at least some Republicans have become wary of McConnell's radical opposition to the action we need to protect future generations from the dangers of climate change.

That could mark the beginning of an important shift. What's needed now is to turn momentum into action.

Bernie Sanders, a Vermont independent who caucuses with Democrats, introduced a measure calling generally for action to protect "Americans from the impacts of human-induced climate change."

The measure, a symbolic gesture at least suggesting that action is needed against the fossil fuel consumption driving climate change, failed 49-50.

Seven Republicans joined all Senate Democrats in the 53-47 approval of another amendment, from Michael Bennet, D-CO., that tied climate change to national security, calling for action to fight the widening scourge by cutting carbon pollution and investing in energy efficiency and renewable power.

The Republicans were the same five as noted above, plus Dean Heller of Nevada and Lisa Murkowski of Alaska.

Republican leaders, though, continue to oppose the steps we need to take to address mounting threats, and the party has proposed no plan of its own to confront climate chaos.

Some Republicans are trying to move in two directions at once on climate change.

Portman, a leading senate Republican, proposed an amendment to put a spike in the heart of President Obama's plan to clean up our dirty power plants and cut the dangerous carbon pollution that's driving climate change.

The party's marquee attempt to kill the President's plan, Portman's proposal wasn't brought up for a vote, though, presumably because it lacked sufficient support its backers had hoped to see.

And McConnell, from the coal state of Kentucky, made clear his intent to continue pressing states to reject the Clean Power Plan, the most ambitious effort ever to cut the carbon pollution from the nation's power plants.

McConnell's proposal sought to protect federal highway money for states that defy the administration on the plan, though officials have made clear the two won't be linked.

The McConnell amendment passed 57-43, with backing from all 54 Republicans and three coal-state Democrats: Joe Donnelly, IN; Heidi Heitkamp, ND; and Joe Manchin, WV.

Symbolically, though, the vote showed weakness in support for the majority leader's approach, as the measure came up short of the 60 votes needed to shut down a filibuster and pass an actual bill.

With some Republicans starting to recalibrate on climate change, party leaders pressed an aggressive agenda to put big polluters first and put the rest of us at risk.

In votes cast largely along party lines, the Senate approved:

These votes provide non-binding guidance for the real legislative budget fights ahead. Taken together, though, they paint a clear picture of a Republican leadership devoted to advancing a big polluter agenda at the expense of the American environment and public health.

We need to let our senators know, all of us, that responsible stewardship of our environment and health are not partisan chips to be traded away in some late-night senate vote-a-rama. They are core American values that unite us as a nation.

If your senators voted to uphold those values, safeguard our future and protect our children from the dangers of climate change, tell them you support those votes. If not, let them know you expect them to get on the right side of these issues—and the right side of history—in the months ahead.