7 Reasons You Should Hate Fast Fashion 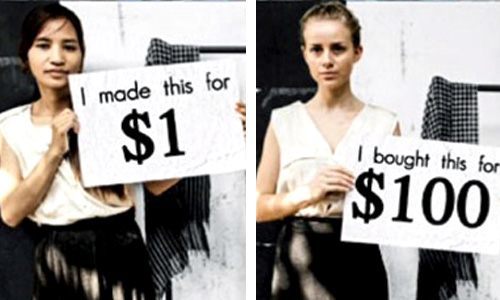 Fast fashion has received a lot of criticism in recent years. As AlterNet’s Glynis Sweeny explains, fast fashion fuels “rampant consumerism … in which clothing is designed to be moved as quickly as possible from catwalk to store.” And as we cycle through clothing faster and faster, the industry’s environmental impact has exploded. “It is particularly worrisome,” said Sweeny, “because it creates demand for and then constantly churns out massive amounts of cheap clothes, ultimately accelerating carbon emissions and global warming.”

In April, Swedish-based clothing company H&M (considered a fast fashion giant) issued its annual sustainability report. While many commended the company’s latest efforts, others, such as Veronica at xoJane, felt fast fashion and sustainability are simply incompatible.

“It’s almost impossible for fast-fashion and sustainability to exist under the same roof: One thrives on the rapid mass-production of trendy clothes, using cheap materials and even cheaper labor to ensure prices that customers won’t complain about; the other focuses on creating garments that will last a lifetime, from sustainable yet pricey raw materials, and, in the best case scenario, using labor that is fairly paid and production processes with limited impact on the environment.”

By focusing on cutting costs wherever possible to mass-produce cheap, disposable clothing, fast fashion offers “trendy,” bargain-price clothing at the expense of people and the planet. Here are seven reasons why you should hate fast fashion:

1. Cotton is a thirsty and chemically dependent plant: Cotton is the most commonly used fiber in the world, making its way into nearly 40 percent of our clothing. Though it only makes up 2.4 percent of all cropland, it uses 12 percent of all pesticides and 25 percent of insecticides.

“Cotton is one of the thirstiest crops in existence,” demanding six times as much water as lettuce and 60 percent more than wheat, according to ProPublica. And yet the federal government subsidizes growing cotton in the Arizona desert.

2. Cotton alternatives aren’t any better: As for common synthetic alternatives to cotton, such as polyester and nylon, they are made from petrochemicals that do not biodegrade. They require a great deal of energy to make, said Sweeny, and the manufactures of nylon emit large amounts of nitrous oxide, an incredibly potent greenhouse gas.

Recycled polyester, made from discarded plastics, uses half the energy as virgin polyester. But often times companies cannot get enough discarded plastic, so they buy unused water bottles directly from manufacturers to be able to market their product as “recycled” polyester, according to Sweeny. Fortunately, eco-friendly alternatives to these unsustainable fabrics are being developed, including products using pineapples, coconuts and bananas.

3. Garment operations, textile mills and dyeing plants are polluting waterways and endangering surrounding communities’ health: Rivers around the world, but especially in Asia, where so much cheap clothing is made, are extremely polluted. Greenpeace East Asia’s Detox campaign has been working to expose the textile industry’s pollution and its effect on residents from Bangladesh to China to Indonesia.

The dangers from chemical exposure among factory workers range from acute to chronic and can ultimately lead to death. “Some dyes and chemicals, such as alum and copper sulfate, can irritate your skin and cause rashes, allergies or breathing problems,” said Hesperian in its guide Hazards in Garment Factories. “Others are more dangerous, such as potassium dichromate and tanning acid, and can cause cancer as well as other health problems.”

5. The chemicals in clothing linger: Chemicals, such as formaldehyde, perfluorinated chemical (PFC), nonylphenol ethoxylate (NPE), p-Phenylenediamine (PPD), volatile organic compounds (VOCs) and dioxin-producing bleach, are all commonly found in our clothing. And all of these chemicals have been shown to produce serious adverse health effects. Dangerous chemicals are found in kids’ clothing too, according to a Greenpeace report.

6. That dress you just bought is more well traveled than you: Raw materials can be shipped from China, India or the U.S. to places like Bangladesh, Vietnam, Pakistan and the Philippines, explained Sweeny. Then, garments are put in shipping containers and sent by rail, container ships and eventually rail and trucks to the retailer. There’s no way to gauge how much fuel is used in total, said Sweeny, but considering Americans buy 22 billion new clothing items every year, the fast fashion industry’s emissions contribution is significant.

7. John Oliver hates fast fashion, so you should too: Oliver wanted to teach fashion CEOs a lesson for the horrible environmental and labor conditions in their factories, so he sent “suspiciously cheap” food to fashion CEOs selling “shockingly cheap” clothing.

If you haven’t already seen “The True Cost,” a documentary about the clothing industry’s impact on the world, you should check it out: