7 Products Big Food Wants You to Think Are Healthy 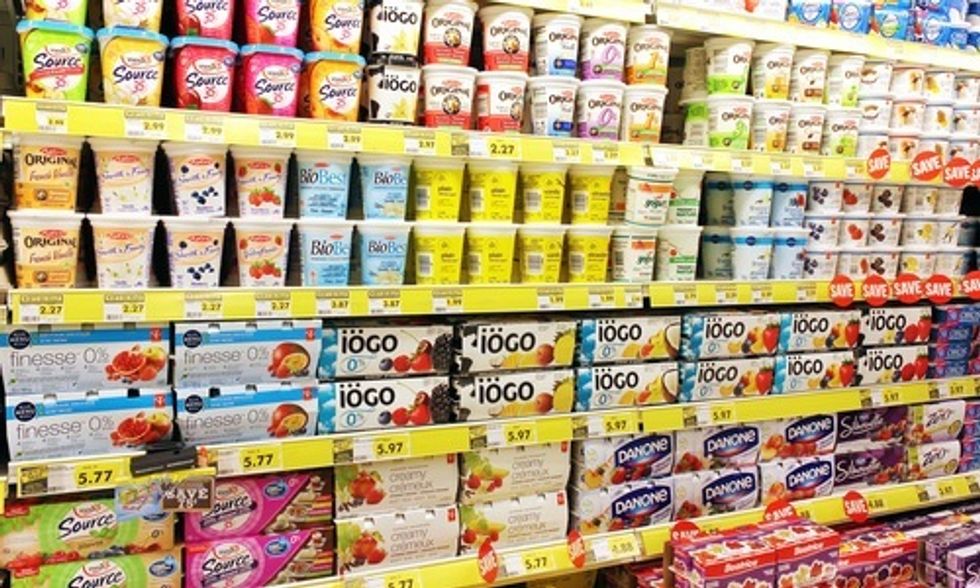 Science has come a long way toward identifying what kills us, but we are still a longer way from knowing what keeps us going. It is in the murky gray areas that charlatans lurk, peddling snake oil remedies they promise will perform miracles. And those charlatans aren’t necessarily shady, bewhiskered characters. More often they are huge corporations with the appearance of respectability, who convince millions of people that their products work. Scarcely a moment goes by when we aren’t being bombarded with messages from television, the internet, print media and radio, courtesy of Big Food. Many of those messages tell us that all we need to do to stay healthy, live longer and maintain that youthful glow is to buy their products.

Low-fat fruit yogurts have the reputation of being a healthy breakfast or snack, but buyer beware. The culprit is all that gooey so-called fruit at the bottom of the yogurt cup. Not so much fruit, lots of sugar.
Niloo / Shutterstock.com

You know you’ve hit the big time when Coca-Cola wants a piece of the action. In 2013, Coke bought Zico, a leading purveyor of coconut water, that slightly sweet, slightly nutty tasting liquid drawn from inside still-green coconuts. Not to be outdone, Pepsi peddles O.N.E. coconut water and along with the independent Vita Coco and celebrity shills like Rihanna and Jessica Alba, coconut water is a half-billion-dollar industry and growing. The health claims are numerous. Low calorie, fat-free, high in potassium, a hydrating machine chock full of electrolytes.

To be truthful, coconut water has a big advantage over Gatorade and other “sports” drinks or sodas in one area. Those beverages are virtual sugar bombs in a bottle. Coconut water is relatively low in sugar. Still, coconut water is expensive and a serving contains 60 calories, enough to pack on the pounds if you are chugging it. While it is an effective hydrator for an athlete who perspires heavily, your body would do equally well or better with lots of cheap, free water. A 2012 study funded by Vita Coco concluded that neither sports drinks or coconut water are any better than H2O. Do the math. A banana and a glass of water: 20 cents. A bottle of coconut water: $2.

Vitamins and water. What could be bad? Coca-Cola (again) agreed and anted up over $4 billion to buy VitaminWater back in 2007. Lifewater, Smartwater and a host of other competitive waters have flooded the market since, all claiming health benefits that are dubious at best. Still, when everybody’s favorite daytime talk show host, Ellen DeGeneres, or “Friends” friend Jennifer Aniston, or star basketball player Dwight Howard, proclaim the wonders of vitamin-infused water, who can argue?

Then again, there was that pesky class-action lawsuit against VitaminWater, settled in 2014, in which the company was accused of fraudulently marketing the beverage as a health drink. It seems that a bottle of VitaminWater contains almost as much sugar as a can of Coke. And despite all the claims otherwise, there is little evidence that vitamins cure anything other than rare and exotic diseases like scurvy and beri-beri (which are caused by vitamin deficiencies). So if you have scurvy, by all means chug a bottle of VitaminWater, although an orange would be a lot cheaper. Otherwise, we are all better off getting our vitamins from real foods, not sugar water.

Advertisements for nutritional and protein snack bars invariably display sexy women in tight-fitting exercise clothes or muscular men with bulging, well-defined abs. Who wouldn’t want to join that club? Marketed as a smart and healthy way to skip meals, slim down, bulk up and live the healthy life, health bars are a $2 billion industry. Of course the “health” part is disputable. Kind bars, which have sold more than a billion bars since 2004, were recently warned by the FDA that the bars do not meet the standard of the definition of “healthy.” Several of the bars were too high in saturated fat and the dark chocolate did not provide enough antioxidant power to merit the label “antioxidant-rich.”

In general, nutritional bars contain a high dose of sugar in some format. (Don’t be fooled by the type of sweetener used. Sugar is sugar, whether it's granulated white sugar or agave nectar or honey.) The fat content in the bars is often high and the amount of calories and protein in them can be much higher than you need.

Ah, granola. Nuts, dried fruit, whole grain goodness. Boxes rich with the color of wheat fields and oats and dripping honey. And sugar. And fat. A lot of it. A quarter cup of typical granola has 4 grams of sugar and 5 grams of fat. Quaker Oats 100 percent Natural Oats and Honey contains almost 7 grams of fat and over 13 grams of sugar in a half cup. And did we mention Quaker Oats is owned by a soda company (Pepsi)? Granola is a decent source of fiber, but most of the commercial ones are too sweet and too artery-clogging. If you like a little crunch in your breakfast, add a little granola to some plain nonfat Greek yogurt.

Low-fat fruit yogurts have the reputation of being a healthy breakfast or snack, but buyer beware. Plain yogurt is a terrific healthy food, an excellent source of protein and more importantly, good source of the gut bacteria that help keep your immune system happy. Unfortunately, processed food companies like General Mills, producer of Yoplait yogurt, muddy the health benefits. In 2013 General Mills settled a class-action lawsuit against it for making unproven health claims about Yoplait and its digestive benefits. Worse though, is the product itself. No one would eat a Twinkie and say it was healthy. Yet Yoplait has more sugar per serving than the cream-filled sponge cake snack (19 grams of sugar per Twinkie vs. 26 grams for Yoplait).

And Yoplait is not the only culprit. Dannon yogurt, 24 grams of sugar. Activia, 19 grams. Even Stonyfield Organic tops out at 29 grams. The culprit is all that gooey so-called fruit at the bottom of the yogurt cup. Not so much fruit, lots of sugar. Like five teaspoons worth. (Here's another good reason to avoid Yoplait: for years wildlife rescuers have been asking General Mills to change the design of Yoplait cups, which are responsible for suffocating skunks and other small mammals who get their heads trapped in the unusually shaped cup. Despite continuing wildlife deaths across the nation, General Mills refuses to budge.)

The non-dairy milk industry has grown by leaps and bounds in the past decade, as the stories of the horrors of factory farming leak out, combined with the search for a lactose-free alternative. Soy milk, hemp milk and other vegetable-based alternatives have grown to a $2 billion combined industry, but none has grown so much as almond milk, the leader at over $700 million. Almond milk corporations like Whitewave and Blue Diamond have extolled the wonders of almond milk and it is a fact that almonds are good for you. But almond milk? Not so much.

An ounce of actual almonds contains as much protein as an egg, as much fiber as a banana and as much good fat as half an avocado. A serving of almond milk contains just one gram of protein and fiber and five grams of fat. Almond milk is composed mainly of water, along with a small handful of ground-up almonds mixed in. Not exactly a nutritional powerhouse. The calcium and other nutrients are mostly added in after the fact, so what you are getting is basically some cloudy water with a vitamin pill dissolved in it, plus some thickeners and other flavor enhancers to make it palatable. In these days of California (where 80 percent of almonds are grown) water shortages, it takes over a gallon of water to grow a single almond, making almond milk an environmental thorn.

There is some evidence that omega-3 fatty acids play a role in reducing the incidence of heart disease, cancer, Alzheimer’s and other life-threatening illnesses. No wonder food corporations jumped on the bandwagon and began adding omega-3s to their food products. Land-o-Lakes “All-Natural” Eggs, Horizon Organic Chocolate Milk, Kashi Go Lean Crunch cereal, Quaker Oats Fiber and Omega-3 granola bars, on and on.

Of course many of these products are enhanced not with DHA and EPA omega-3 (the fatty acids that seem to be protective), but with ALA omega-3, which has not much compelling evidence of benefit. Plus some of the products are loaded with sugar. The Center for Science in the Public Interest recommends that if you want your omega-3s, you should get them from natural sources like salmon, which has them in abundance. A six-ounce serving of salmon contains 100 times the amount of good DHA and EPA omega-3s as a serving of DHA-enhanced foods like yogurt or milk.

Does Greek Yogurt Live Up to All its Hype?