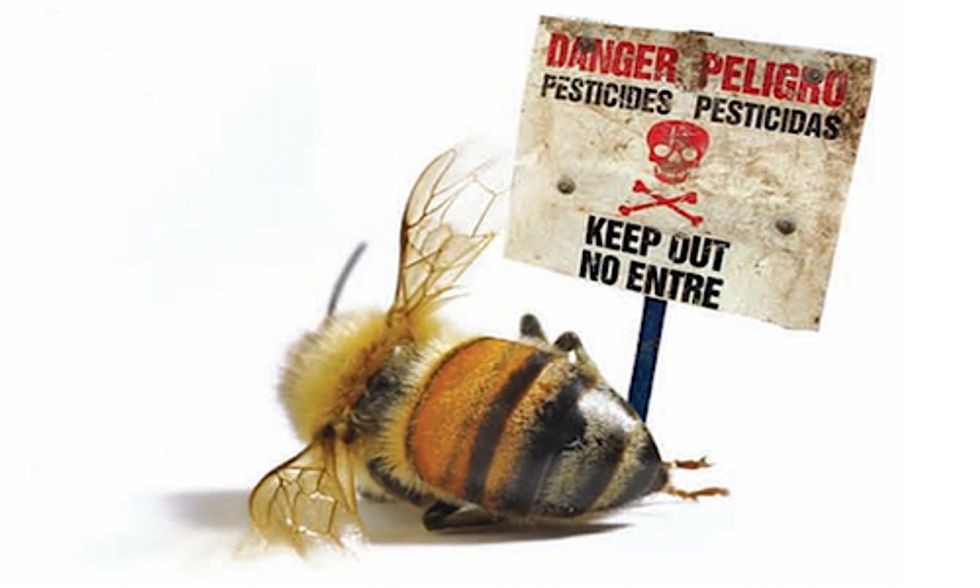 On the eve of Bayer’s Annual Stockholders’ Meeting in Germany, author Michele Simon and Friends of the Earth released a new report documenting the tactics used by Bayer and other pesticide companies to delay regulatory action on neonicotinoid (neonic) pesticides—a key contributor to bee declines.

The European Union banned the three most widely used neonicotinoids, based on strong science indicating that neonics can kill bees outright and make them more vulnerable to pests, pathogens and other stressors. However, these pesticides are still widely used in the U.S. despite massive bee losses that threaten vital food crops, from almonds in California to apples in Washington.

“These pesticide companies use PR tricks straight out of Big Tobacco’s playbook to manufacture doubt about science and fool politicians and the public to delay action, while they keep profiting from bee-killing pesticides,” said Michele Simon, report author and public health attorney who tracks corporate tactics.

PR tactics revealed in the report include:

3. “Bee Care” PR Blitz: PR campaigns to create the appearance of being “out in front” and taking a lead role in “saving bees” by promoting “bee health,” building “Bee Care Centers” and launching a “Bee Care Tour” while downplaying the role of pesticides in bee deaths.

4. Buying Credibility: Funding scientific studies, cultivating alliances and strategic partnerships with farmers, beekeepers and agricultural organizations in order to buy credibility for their “anything but pesticides” talking points and position themselves as “friends of the bees.”

5. Blaming Farmers and Beekeepers: While denying criticism of pesticides, blaming farmers who use pesticides for any “rare” negative effects on bees, and blaming beekeepers for poor bee care.

7. Targeting Children: Propaganda to win young hearts and minds, such as Bayer’s children’s book entitled Toby and the Bees in which a friendly beekeeper tells young Toby the bees are getting sick, but "not to worry," it's just a problem with mites, and there is special medicine (made by Bayer) to make bees healthy.

“It’s important for the media, policy makers and the general public to be alert to these deceptive public relations strategies. Bayer, Syngenta and Monsanto make billions from bee-killing pesticide products while masquerading as champions of bee health,” said Lisa Archer, food and technology program director at Friends of the Earth. “Are their profits more important than our food supply? Are they more important than the livelihoods of America’s farmers? Congress must act now to ban neonic pesticides that threaten America’s farmers and our food security.”

In 2013, U.S. Rep. Blumenauer (D-OR) and Rep. Conyers (D-MI) introduced the “Saving America’s Pollinators Act,” which seeks to suspend the use of neonics on bee-attractive plants until the Environmental Protection Agency reviews all of the available data, including field studies.