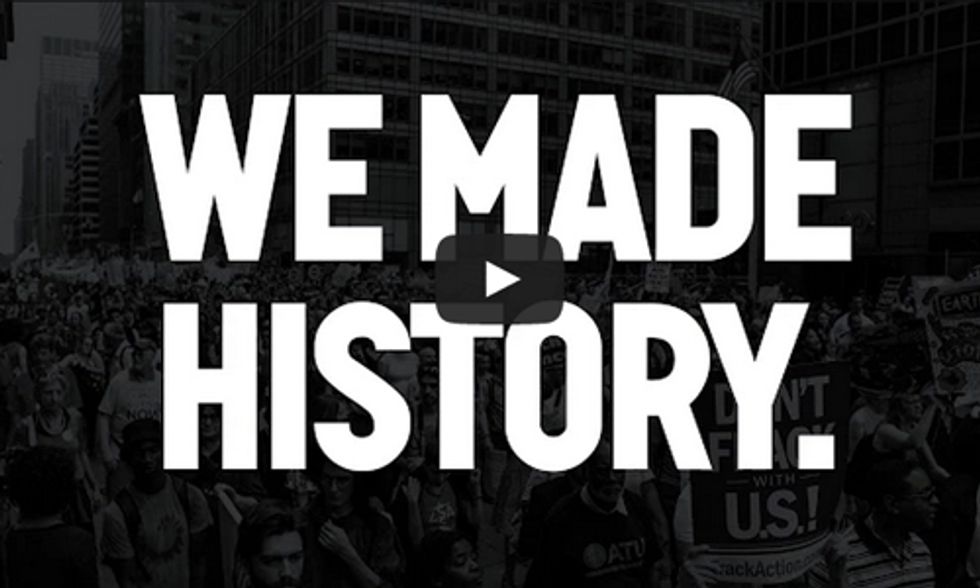 Thanks to 350.org's Thelma Young for pulling together what she found to be the seven best climate action videos of 2014. Check out these inspiring moments of 2014. The “films of incredible people and communities standing up for the climate."

It’s hard to capture just how powerful, diverse and momentous the People’s Climate March was—but this wrap-up video still gives me goosebumps every time I watch it.

We can’t forget the incredible full length film Disruption that clearly laid out why the People’s Climate March was so necessary. With more than 1,200 screenings in 50 countries, Disruption was a clear and powerful film that helped inform and engage many new climate activists.

You can still view the full film online at watchdisruption.com.

Pacific Islanders having a showdown with the world’s largest coal port in Australia—this was undoubtedly one of the most powerful actions this year. This video makes us all want to stand with the Pacific Climate Warriors.

“Dear Matafele Peinem” made us all cry—everyone from the toughest world leader to the youngest climate activist. The poem she wrote for her young son, and then read at the UN in September, hit at the intense reality of climate impacts happening right now in the Pacific. This is one of the most powerful examples of a mother fighting tool and nail to build a better world for her son.

You can also watch the footage of her delivering this on the floor of the UN.

On April 22, the Cowboy Indian Alliance rode into Washington, DC, set up eight tipis on the National Mall, blessed the encampment, and settled in for a week of resistance and protest against the Keystone XL pipeline.

Over the last five years, hundreds of people from around the world have gathered with First Nations leadership to walk, pray and heal in the traditional territories most devastated by the Alberta Oilsands production.

One of the most beautiful divestment actions. A cold Saturday evening, the Saturday before Advent, environmentalists gathered at Sergels Torg in Stockholm, Sweden. The dancers carried white umbrellas—whilst dancing they fluttered round & round, up & down, back & forward like a clear waterfall in the dark. From all sides the crowd closed in upon the dancers with black umbrellas, closed in around them like a dark sea. Until there was no white light left to be seen … Until the white umbrellas dove out from below and aimed their spotlights toward our demand: DIVESTERA.