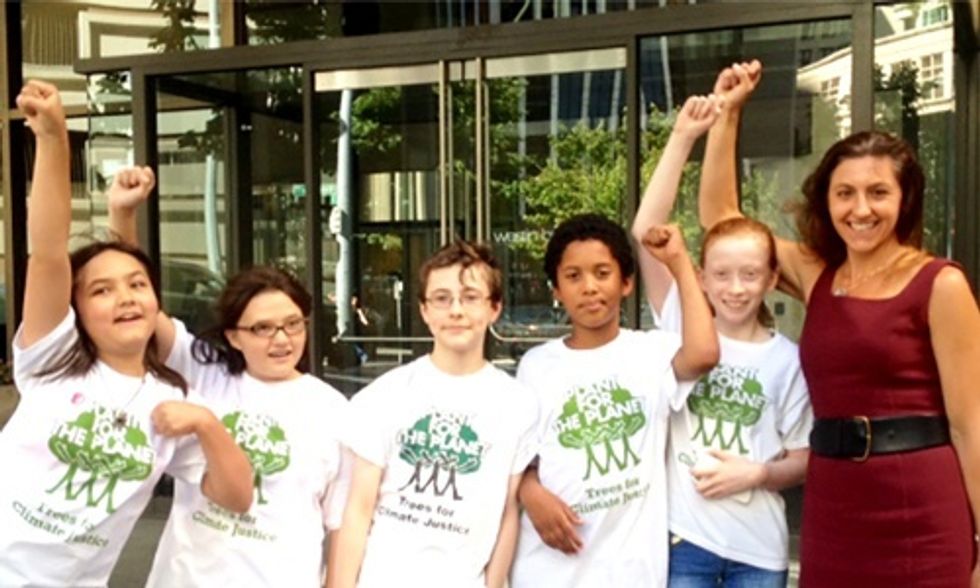 Young Washington citizens sat in a packed King County courtroom yesterday and watched as their attorney, Andrea Rodgers, gave a stunning and impassioned argument to the court as she fought for her clients’ right to a healthy environment and safe climate. Judge Hollis Hill heard oral argument in the important case brought by seven young petitioners to address Washington Department of Ecology’s (DOE) persistent refusal to set science-based carbon pollution limits.

Andrea Rodgers and some of the youth plaintiffs, excited before their meeting with Gov. Inslee. Photo credit: Our Children's Trust

This is the second time this year the petitioners have found themselves in a King County courtroom. In May, Judge Hill heard oral argument in the case and, based on the undisputed climate science, ordered the DOE to reconsider its first denial of the youths’ petition. Doubling down on obsolete science, the DOE denied the youths' petition a second time.

The young petitioners sat stunned yesterday as counsel for the DOE told the court, “I do not know if there is an inherent right for a healthful environment,” and proceeded to tell the court that it was up for the legislature to decide. The DOE was steadfast in their position that they are not required to regulate carbon dioxide emissions based on the current science.

Rodgers and some of the youth petitioners after their first hearing. Photo credit: Our Children's Trust

“These brave kids have worked extremely hard to present Ecology with the most current and best available climate science, all of which the agency has ignored,” said Western Environmental Law Center attorney Rodgers. “It is now time for the court to step in and direct Ecology to initiate a rulemaking process based on the best available science—not the most convenient policy—to protect these youths’ fundamental rights. Ecology’s legal obligations to protect the air and water resources in this state are clear; now it is up to the judge to enforce those laws.”

In response to the youth petitioners’ lawsuit, the DOE plans to initiate rulemaking as directed by Gov. Inslee “to set a regulatory cap on carbon emissions and to develop reductions in carbon dioxide emissions using its existing authority.” As it stands, the DOE plans to use targets from the 2008 standards that the agency has already admitted “should be adjusted to better reflect the current science,” and “need to be more aggressive in order for Washington to do its part to address climate risks.” Counsel for the youth petitioners made it clear to the court that the DOE's non-scientific rulemaking effort does not remedy the youth petitioners’ legal claims alleged in the case.

The youth plaintiffs met with Gov. Inslee on July 17 to discuss their case. He directed the DOE to act on climate on July 28. Photo credit: Our Children's Trust

The youths argue that a carbon cap and emissions reductions must be based on a target of atmospheric carbon dioxide concentrations of no more than 350 parts per million (ppm), as put forth by their experts, Dr. James Hansen, Dr. Pushker Kharecha, Dr. Ove Hoegh-Guldberg, Dr. Richard Gammon and Matthew McRae.

Rodgers argued to the court that more delay in resolving their legal claims will lock in the infringement of their fundamental rights.

Some of the youth plaintiffs at a climate demonstration. Photo credit: Our Children’s Trust

“Andrea Rodgers gave a profound argument on behalf of the youths and called on the court to rule on the youths’ legal rights by ordering Ecology to take science-based action,” said Julia Olson, executive director and chief legal counsel at Our Children’s Trust.

Judge Hill is reviewing the extensive briefing in the case and will issue a written decision before the end of the year.

The seven youth petitioners are represented by Andrea Rodgers of the Western Environmental Law Center. The lawsuit was filed with the help of Our Children’s Trust, an Oregon-based nonprofit orchestrating a global, game-changing, youth-driven legal campaign to establish the right to a healthy atmosphere and stable climate.