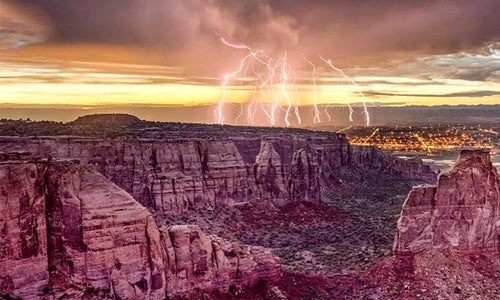 It’s hard to believe Instagram is only five years old since now it is ubiquitous. By December 2010, Instagram had 1 million registered users. By September of 2011, it was up to 10 million. As of December of last year, Instagram co-founder Kevin Systrom announced that Instagram has 300 million users accessing the site per month. That is some crazy growth. And of course that many users means an insane amount of uploaded photos.

1. U.S. Department of the Interior is home to the National Park Service, this department posts some insanely beautiful photos on the daily. Seriously, it was so hard to pick just one to feature.

Photo @coryrichards Lioness and cub sharing a quick Okavango shower. Shot on assignment for @natgeo with @intotheokavango going source to sand on the Cuito River. The water that becomes the Delta originates in the Angolan highlands and forms a complex web that relies heavily on management by Angola, Namibia, and Botswana. Use of the waters that flood the delta every year sustaining wildlife such as this is key to its longevity as a cohesive ecosystem. @thephotosociety @natgeocreative @eddiebauer #okavango15 posted from the field A photo posted by National Geographic (@natgeo) on Jul 22, 2015 at 8:05am PDT

3. Conservation International: I could easily scroll through this organization’s pictures for hours. Who cares what Kim Kardashian is up to? Look at this!

People need resources and services from the #ocean. But are we using them in a way that can continue into the future?

A photo posted by Conservation International (@conservationorg) on Jul 22, 2015 at 10:07am PDT