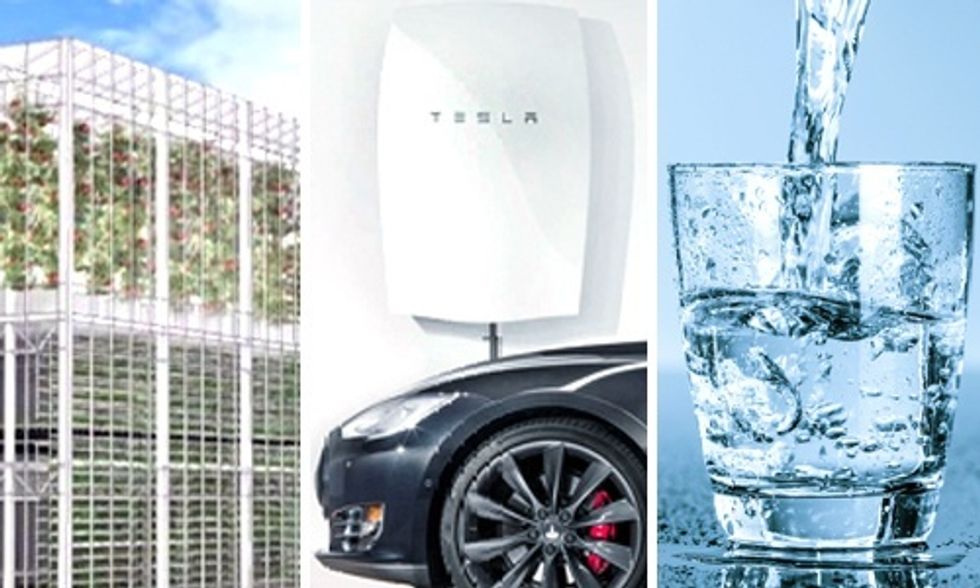 While we as individuals can do a lot of good by practicing our three R's—reduce, reuse, recycle—we can't do it alone. Innovation—from sustainable transportation to revolutionary battery storage device—plays a tremendous role in making positive and long-lasting change to protect our precious planet.

Check out these seven innovation that are changing the way we do business:

Food deserts, in which a whole neighborhood is far removed from grocery stores that sell healthy food, are a big issue in communities here and around the world. Due to the lack of fresh food, people eat fast food or pre-packaged goods that are inexpensive but high in fat, calories and sugar, and could lead to obesity, diabetes and heart disease.

However, sky-high farms are sprouting up around the world in places were where traditional agriculture would have been impossible. In places such as perpetually wintry Jackson, Wyoming, forward-thinking planners are developing a three-story hydroponic greenhouse called The Vertical Harvest that can produce more than 37,000 pounds of greens, 4,400 pounds of herbs and 44,000 pounds of tomatoes a year. This means eating a nutritious and sustainable meal could be easy as looking up.

Not only can vertical farms defy any weather, they also adapt to disaster and can even help save lives, such as Caliber Biotherapeutics in Bryan, Texas that's growing tobacco-like plants in vertical farms to make new drugs and vaccines.

Plastic cups are shredded and turned into the filaments fed into a 3D printer to produce objects like plastic rings. Photo credit: Better Future Factory

This emerging technology has been touted as solution to many of the planet's pressing problems. The Perpetual Plastic Project aims to turn recycled plastic bottles, cups and other stuff that too often ends up in landfills into 3D printing filament. In the U.S., plastics make up nearly 13 percent of the municipal solid waste stream.

Additionally, Michigan Technological University's first-ever mobile, solar-powered 3D printer can create whole range of printed-products: wind turbines, hand-cranked power generators, medical braces, breast pumps, prosthetic leg covers, water spouts and more. The fact that it can be done at a fraction of the cost and in light speed is especially crucial to undeveloped nations with unreliable access to electricity. In Haiti, the nonprofit organization Field Ready is working on printing umbilical cord clamps in less than eight minutes.

Other innovators are even using 3D printers to create nutritious food to help reduce the global food waste crisis and the company Pembient is using 3D printing to make fake rhino horns to stop poaching and save the rhino from going extinct!

For the future to be good, we need electric transport, solar power and (of course) ... pic.twitter.com/8mwVWukQDL

In order to curb our reliance on dirty fossil fuels that drive climate change, it's important that we untether from Big Power. That's why it was so revolutionary when Tesla CEO Elon Musk recently unveiled a suite of batteries that can store electricity for homes, businesses and utilities in an ambitious mission to provide pollution-free energy.

“Our goal here is to fundamentally change the way the world uses energy,” Musk told Bloomberg. “We’re talking at the terawatt scale. The goal is complete transformation of the entire energy infrastructure of the world.”

This solar-powered electric bike has solar cells on the wheels that send renewable energy directly to the bike’s battery. On a full charge, it can go up to 30 mph. Photo Credit: Solar Bike

Is North America experiencing a biking renaissance? Americans are driving less, more cities are encouraging people to bike and electric bikes sales are soaring. We here at EcoWatch have seen a lot of amazing two-or-three-wheelers lately—from cargo bikes to this Segway with pedals—but one of our recent favorites is the "Solar Bike" created by Danish solar engineer Jesper Frausig that's powered by the clean, green energy of the sun.

Another cool electric bike we've seen is the “Adam” concept bike with a detachable battery/speakers/navigation unit/power outlet on the handlebar that works—and looks like—a perfectly normal bicycle when the battery pack is taken off.

With parts of the planet perilously low on fresh water, a team from the Massachusetts Institute of Technology and Jain Irrigation Systems have come up with a method of turning brackish water into drinking water using renewable energy. This solar-powered machine is able to pull salt out of water and further disinfect the water with ultraviolet rays, making it suitable for irrigation and drinking.

The technology recently won the top $140,000 Desal Prize from the U.S. Department of Interior that recognizes innovators who create cost-effective, energy efficient and environmentally sustainable desalination technologies that can provide potable water for humans and water for crops in developing countries.

Could this plastic-capturing platform clean up the ocean's trash? Photo credit: The Ocean Cleanup

Plastic is a major threat to marine life and marine ecosystems and also causes about $13 billion in damages to marine ecosystems each year. To solve this daunting issue, Boyan Slat, a 20-year-old former aerospace engineering student, has an ambitious plan to clean half the Great Pacific Garbage Patch in a decade with his Ocean Cleanup, project. The project involves a static platform that passively corrals plastics as wind and ocean currents push debris through V-shaped booms. Floating filters then catch all the plastic off the top three meters of water where the concentration of plastic is the highest, while allowing fish and other marine life to pass under without getting caught. Some have described the project as the "world’s first feasible concept to clean the oceans of plastic."

A related honorable mention goes to sportswear company Adidas for developing shoes and clothes made from trash that is recovered from the ocean. The sportswear giant will also phase out plastic bags in its 2,900 retail stores around the world.

Did you know that 41 percent of the country’s total energy consumption comes from residential and commercial buildings? That's why this green building movement is so brilliant—net-zero buildings produce at least as much energy as it uses (if not much more).

Archiblox, an Australian architecture firm, unveiled the world’s first carbon-positive prefabricated home. The Archi+ Carbon Positive House, is so efficient it can put energy back on the grid. Over on our shores, southern California’s North Fontana area will be home to the state’s first Zero Net Energy community consisting of at least 20 zero net energy homes.