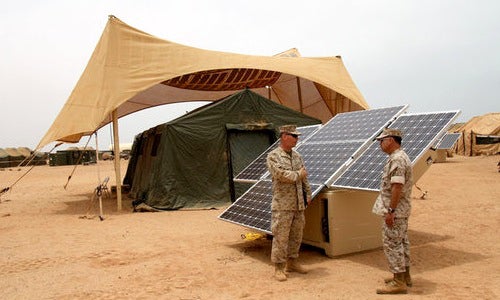 By Alex Straub and Michael Timberlake

With the excitement of a long weekend it’s easy to lose sight of what this extra vacation day is really about. Today, Veteran’s Day, offers a specific opportunity to express our gratitude for the sacrifices military men and women make every day across the country. As one of our country’s most vital valuable assets, the military and its missions and tactics are frequently discussed and praised.

But often left unnoticed is the military’s growing leadership on the energy front. 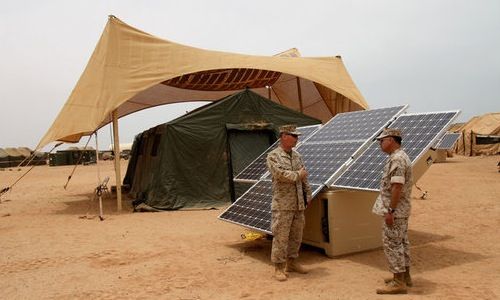 We trust the military to protect our nation, family and friends, so it should come as no surprise that we often seek its guidance in areas outside of combat. The Hummer’s hulking 8 miles per gallon transition from the battlefield to civilian life is just one (fairly regrettable) example. However, after the Hummer’s short-lived popularity (one would have to assume was largely due to the skyrocketing cost to fill up its 32-gallon tank), the U.S. Army and Navy, the Department of Defense (DOD), the Department of Veterans Affairs, and other military organizations have made advancing their energy efficiency a central objective.

A few highlights of these commendable efforts include:

Senator Mark Warner (D-Va.) is just one politician who believes efficiency is important for the Armed Forces and has championed those efforts over his Senate career. At a Senate Energy Committee Hearing in 2012 he said, “[energy conservation in the military] is about saving money … and saving lives.” Warner understands that increasing energy productivity improves military capability, lowers costs, and increases unit self-sufficiency and performance while protecting supply lines—which ultimately increases safety for our soldiers.

By implementing greater energy efficiency practices, government agencies, businesses, and individuals can see lower energy costs and increased performance in a similar way. Active military personnel in combat zones see the impact of energy efficiency practices more quickly and directly than the average civilian who isn’t necessarily worried day to day about the risks of transporting fuel or the energy needed to maintain essential operations—but the benefits of adopting these practices are real and tangible nonetheless.

Energy efficiency has clearly become a top priority for our Armed Forces, but it’s high time we move beyond praise and follow the lead of our men and women in uniform by embracing energy efficient technologies, policies, and practices at home as well as on the battlefield.