7,100 Cities From 119 Countries Join Together in Historic Collaboration to Accelerate Climate Action 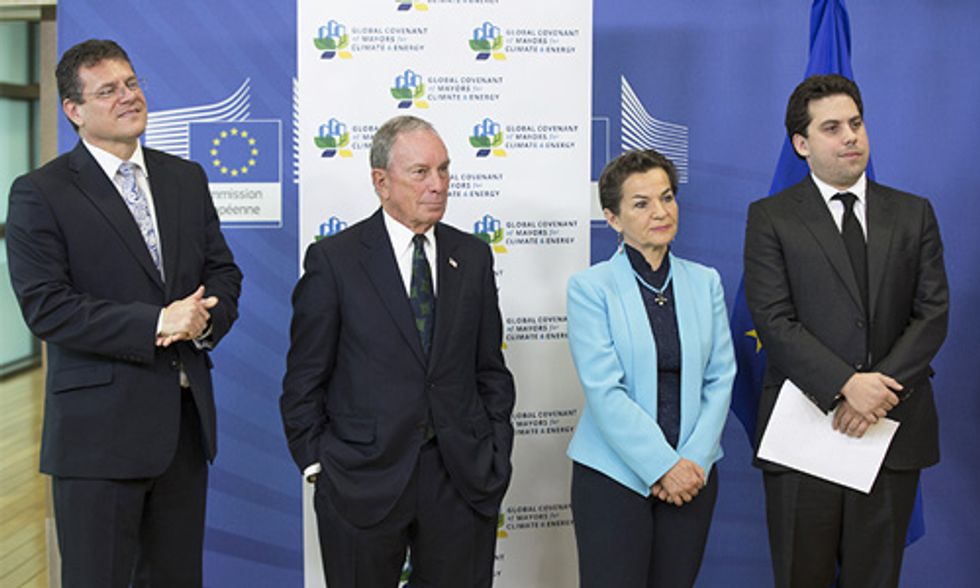 When UN Secretary-General Special Envoy for Cities and Climate Change Michael R. Bloomberg suggested creating a Compact of Mayors to mirror the UN program for national commitments on climate change, it was not possible to guess how central the idea would become to putting mayors at the heart of global climate action. But it turned out to be a game changer.

Just five months on from the "Abu Dhabi Ascent" conference where we first discussed the idea, in September 2014 at the UN Secretary General's Climate Summit in New York City, three global city networks, C40, ICLEI and UCLG joined forces to help activate the compact. We hoped to better quantify the collective magnitude and potential for cities and towns to deliver emissions reductions. Working quickly, decisively and collaboratively under the compact, the networks helped to inspire ambitious commitments from more than 500 cities of all sizes around the globe; just as nation states registered commitments to emissions reductions in the lead up to the COP21 climate summit.

The effort demonstrated the unprecedented scope and degree to which local governments were already engaged in meaningful, collaborative climate action and, importantly, gave a voice for them at a high level in the UN, through the leadership of Special Envoy Bloomberg and engagement of the Local Government and Municipal Authorities (LGMA) constituency. As a result, cities were crucial in shaping and advocating for a strong Paris agreement on climate change—and city leaders will be crucial in delivering on its ambition going forward.

Now cities are making another great and historic stride: bringing together the Compact of Mayors and the EU Covenant of Mayors to form a new Global Covenant of Mayors for Climate & Energy, announced Wednesday in Brussels. This new initiative will be even more important for its ability to unify existing commitments at all levels, including thousands of European towns and villages and hundreds of major global metropolises—altogether more than 7,100 cities from 119 countries and six continents and representing more than 600 million residents, more than 8 percent of the world's population.

To give a sense of the magnitude of the impact these cities can have: as of December 2015, cities and towns signed on to the Compact of Mayors had already made commitments that could deliver half of the global urban potential greenhouse gas (GHG) emissions reductions available by 2020. At the same time, actions by EU Covenant of Mayors signatories accounted for 15 percent of the EU-28 CO2 emissions reduction 2020 target. Under one unified banner, these city climate leaders will demonstrate the vast power of cities to effect global change.

Aligning efforts will allow for greater collaboration between cities across the world to tackle the biggest challenge humanity has ever faced, bridging gaps and building connections, as well as increasing funding to support and empower cities to do more. The merger will harness the convening power and investment of the European Union and the UN Secretary General Special Envoy for Cities and Climate Change, generously supported by Bloomberg Philanthropies—critical ingredients to unlocking the potential of cities to take action. We hope many other donors will follow suit to support local climate action that can be scaled up, with support of the city networks. Moreover, a merged initiative will ensure more consistent and comparable data—giving investors the ability to see that the actions cities have been taking are having lasting and verifiable impact.

As city networks, we have long been committed to the principle that working together helps cities go farther, faster. We therefore welcome the Global Covenant of Mayors for Climate and Energy. We look forward to engaging new partners and a broader coalition of city leaders committed to taking concrete, measurable and transparent action on climate change. United, we can lead the drive to peak global emissions by 2020 and enhance climate change adaptation and resilience in our communities.