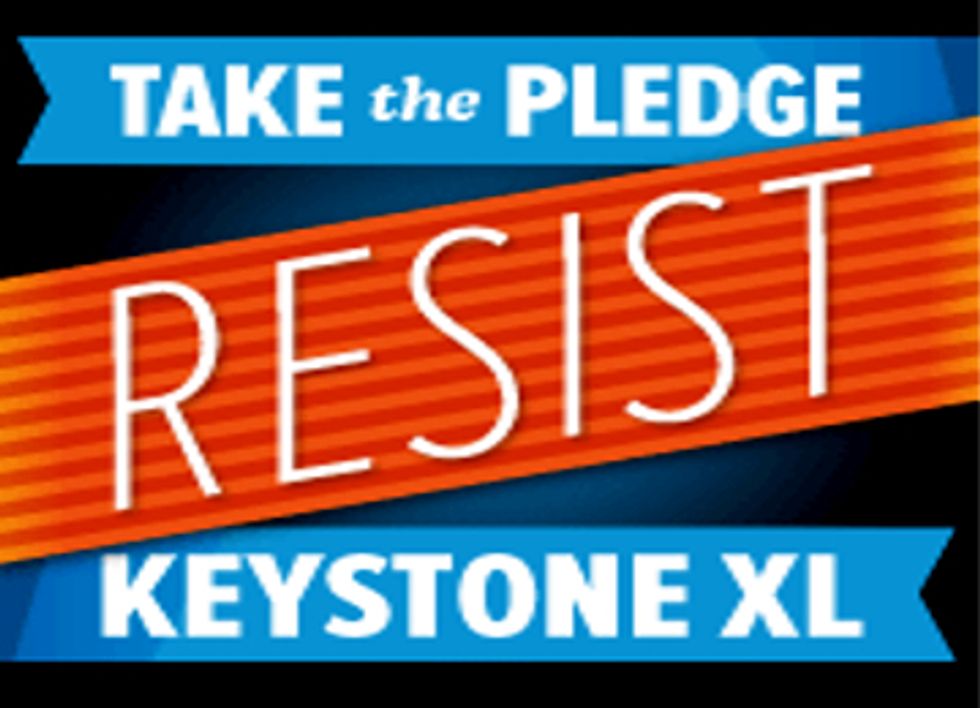 More than 69,000 Americans are pledging to risk arrest to halt the construction of the 1,700-mile Keystone XL pipeline. In a stand of solidarity with those living along the pipeline’s path, residents from across the U.S. are vowing to take part in historic acts of civil disobedience aimed directly at shutting down Keystone XL.

The actions are expected to come in many forms, including mass sit-ins at strategic locations along the route and other large-scale actions in major U.S. cities. The protests are expected to be unleashed when—and if—the State Department gives a nod of approval for the pipeline’s construction.

If the State Department recommends approval of the TransCanda pipeline, President Obama will have two weeks before a decision will be made.

During that time, those living along the pipeline route—and their supporters throughout the country—are going to let President Obama know they’re not going to grin and bear it. It’s not the first time anti-Keystone advocates have taken their demonstrations to the next level. In February, roughly 50 demonstrators were arrested outside the White House during a sit-in against Keystone.

Standing up Against the Giant

“Most events will be outside Washington DC, because this decision will affect all of us, where we live,” a post by Credo Action regarding the pledge states. “So we want to see the beautiful sight of actions across the nation—including a wide variety of symbolic targets like State Department offices, TransCanada corporate lobbies, Obama Organizing for Action meetings, banks that are financing tar sands oil development, areas ravaged by Superstorm Sandy and along the pipeline route.”

In March, the State Department released a report indicating approval of the Keystone pipeline would not contribute to global climate change, using the rationale that the extraction of Alberta tar sands—the source of carbon emissions—will continue with or without America’s involvement with Keystone XL.

In June, President Obama delivered a nationwide climate change address, stating that the pipeline could be approved only if it did not result in a net increase in carbon emissions. This wasn’t taken as a good sign for anti-Keystone advocates—but for those fighting for their land, the fight isn’t over until it’s over.

“I am a firm believer in President Obama and his words to the people that we need to stand up and we need to show how a democracy works, and when you don’t agree about something and feel strongly about something, you need to stand up and speak out,” Abbi Harrington-Kleinschmidt, a Nebraska farmer whose land sits along the proposed Keystone route, told Mint Press News. “I feel it’s what President Obama is asking us to do.”

The united front against the Keystone pipeline is layered in emotion. The concerns among activists are vast, ranging from issues of climate change to problems that could arise from pipeline spills. There’s also the issue of whether a foreign corporation should have eminent domain authority to take Americans’ land.

For those living in the midst of the battle, the pledge to keep Keystone out of America is rooted in all these concerns, but protection of their own land takes the struggle to a personal level.

Anti-Keystone XL protesters stage a sit-in in front of the White House in Washington, DC, on February 13. Thousands have pledged to engage in civil disobedience along the pipeline’s proposed route. Photo credit: Chesapeake Climate via Flickr

Standing in Solidarity with American farmers

Harrington-Kleinschmidt’s farmland in Nebraska’s York County dates back five generations. After her father passed away, more than 2,000 acres of farmland was passed down to her and her three sisters, who now manage the farm.

Like other Nebraska farmers, Harrington-Kleinschmidt learned about Keystone XL when TransCanada submitted its first pipeline route proposal. During that time, the map didn’t impact her area—but it did impact her brother-in-law’s land, located roughly 20 miles north of her property.

“He was wrestling with TransCanada for two or three years,” she told Mint Press News. “I was aware that he was having these issues, but I felt like, well, it doesn’t affect me, so I didn’t learn any more about it at the time.”

That all changed when TransCanada changed its proposal, settling on a route that went directly through her farmland. Unlike other farmers in Nebraska, Harrington-Kleinschmidt has refused to sign any agreements with TransCanada. Instead, she’s relied on the legal counsel of the Nebraska Easement Action Team, which provides free assistance to farmers battling TransCanada and their lengthy, complicated easement proposals.

From her work with the team, Harrington-Klein learned a thing or two about the easements presented by TransCanada and discovered it wasn’t in the best interest of her or her family to sign.

“It’s a very dangerous thing,” she told Mint Press News. “It’s a perpetual easement. TransCanada would own that easement forever. They offer a one-time payment to the landowner to put that dirty thing in the ground, and it’s not like they’re going to pay you every year.”

Harrington-Klein’s land hosts corn and soybean crops, which she rotates every year to keep the soil healthy. In her eyes, it’s the most valuable farmland in the nation, if not the world, as it’s flat, sits in the midst of an area known for its fertile soil, and is near the Ogallala Aquifer, which the Sierra Club considers one of the world’s largest supplies of groundwater.

She’s concerned about the impact Alberta tar sand extraction has on global climate change, and she doesn’t like the idea of more than 800,000 barrels of thick tar sand oil running under her property every single day—not only because of what it represents, but because of the threat it poses to her land.

For Harrington-Klein and her neighbors, it’s a not a matter of if a spill will occur, but when. Aside from contaminating farmland and fertile soil, there’s concern over contamination of the Ogallala, which provides water to eight states for drinking, irrigation and livestock watering purposes, according to the U.S. Geological Survey, as noted in the Journal Star.

“It just goes right to my core, probably because of the legacy that ties to my family for five generations,” she said, “and knowing that my ancestors who worked so hard—and my sisters and I, who have shed a lot of blood, sweat and tears on that farm too. What’s so upsetting is that a foreign corporation can threaten to come and take your land from you with such a dangerous pipeline.”

Will America Pull Through with Pledge?

The organizations that have paired with Credo Action to initiate the pledge are now attempting to draw the faint of heart into the nationwide campaign of peaceful civil disobedience.

“You shouldn’t make this pledge lighty,” the Credo post states. “We certainly don’t ask lightly. We ask in the belief that there are tens of thousands of people out there who feel as strongly about this as we do; who believe that these circumstances call for extraordinary action, and want to be part of that action in their community.”

Credo is joined by Bold Nebraska, the Rainforest Action Network and 350.org, among other environmental advocacy organizations. To prepare residents throughout the country for what’s expected to be a two-week campaign, Credo is partnering with Rainforest Action Network and The Other 98% to host local activist training sessions, where those taking part in the pledge will learn how to lead and organize local civil disobedience actions.

As of July 12, more than 750 people throughout the U.S. had signed up to lead local actions and take part in trainings, according to a press release issued by Credo. The trainings aren’t geared toward longtime environmental activists. Rather, the people who have taken interest in the pipeline debate are those who have sympathized with their friends, family members and fellow Americans who live along the route.

Harrington-Klein has a second cousin who lives in New York City. While far from the pipeline, the stories of Nebraska’s fight remain heightened in her cousin’s heart. More than 1,300 miles from York County, a sign opposing the Keystone pipeline sits in her yard.

“After all, we are the conservatives, standing up for a safe and secure future for our families. It is those we protest, those who profit from radically altering the chemical composition of our atmosphere—and the prospects for survival of humanity—they are the radicals,” the Credo pledge states.

SHARE YOUR THOUGHTS BELOW: What action will you take to show your opposition to the Keystone XL pipeline?