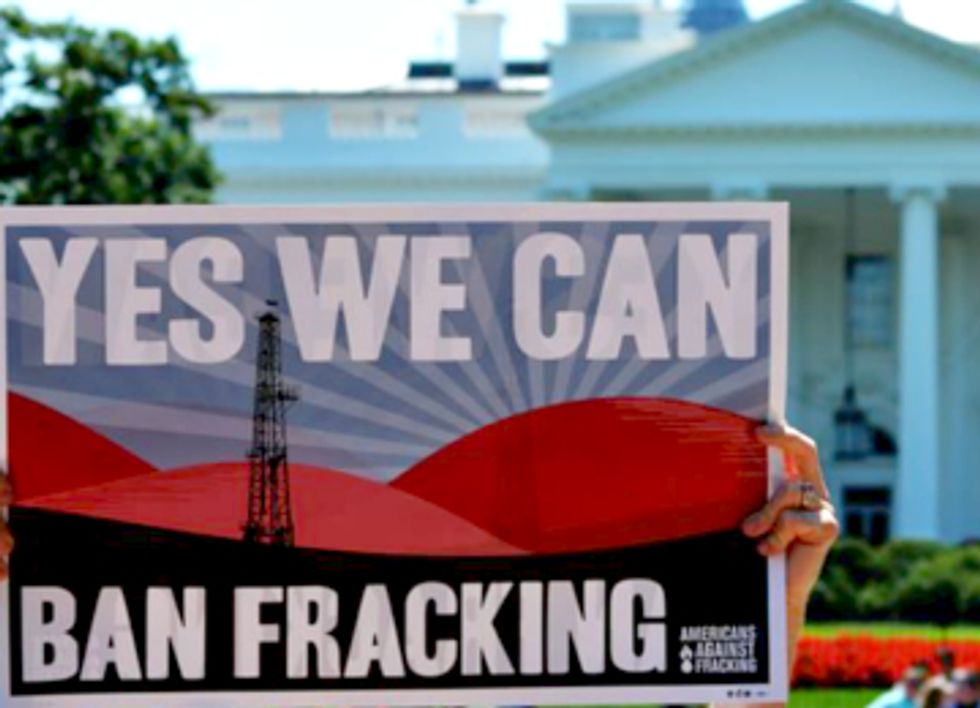 This development amplifies the message sent by the 7,800 people who called the White House yesterday, urging President Obama to protect communities and their resources from the negative effects of fracking. The deadline for submitting public comments to the federal government regarding drilling and fracking on federal lands is today, Aug. 23.

“By allowing fracking on public lands, the BLM is participating in a form of legalized corruption that pollutes our democracy and undermines the national interest,” said actor and advocate Daryl Hannah.

“They are sacrificing our public lands, which they’ve been entrusted with, to the fossil fuel industry and private profits," she continued. "Instead, they should honor their mandate to ensure the health of these lands, their uncontaminated water, air, soil and biodiversity on behalf of all the citizenry and future generations.”

“From California, to Colorado, Pennsylvania to New York, and everywhere in between, the public understands that fracking poses an immediate threat to our water, air, health and climate, and they’re fighting back," said Food & Water Watch Executive Director Wenonah Hauter.

A letter sent today to the President by Americans Against Fracking and its coalition partners explained that the BLM controls access to more than 700 million acres of federally owned mineral rights—most of which are beneath federal public and Native American land. Currently, about 38 million acres of federal public lands are leased, and over each of the past four years, the oil and gas industry has drilled over three thousand new wells, most of which will be or have been fracked.

“Fracking on public lands puts the drinking water of tens of millions of Americans at risk,” said Mike Hersh, a MoveOn volunteer organizer in Maryland and Maryland coordinator for Progressive Democrats of America. “MoveOn members are organizing in 43 states to protect our water, our climate, and our communities from fracking, and today we’re taking that call directly to President Obama—ban fracking on public lands.”

In June, President Obama articulated the importance of addressing global climate change in his Climate Action Plan. Yet drilling and fracking for oil and gas will only make the problem worse. Methane, the primary constituent of fracked gas, is a potent greenhouse gas, at least 25 times more efficient than carbon dioxide at trapping heat over a 100-year time frame, and causes between 79 to 105 times the climate forcing of carbon dioxide over a 20-year time frame. The National Oceanographic and Atmospheric Administration found that the rate of methane leakage in at least two active gas fields is much higher than the U.S. Greenhouse Gas Inventory’s current estimate.

“Many of us worked hard to elect President Obama because we wanted a President who would protect all Americans,” noted David Braun of United For Action. “It’s time for him to represent those who elected him, not big oil and gas. While it’s admirable that the President wants to tackle climate change, fracking has no place in any plan to combat it.”

“The Keystone XL fight is proof that everyday people can fight toe-to-toe with the fossil fuel industry to stop climate change,” added Jason Kowalski, policy director for 350.org. “Fracking is unlocking new carbon reserves, and this is carbon that climate scientists say we can’t afford to burn. President Obama takes climate change seriously, so he knows we can’t simply frack our way out of this problem.”

When burned, fracked gas produces significant amounts of carbon dioxide. In fact, even if methane leaks could be minimized to about one percent of what is produced, the International Energy Agency has estimated that a scenario of increased global dependence on fracked gas would increase the global average temperature by 3.5° Celsius, or by about 6.3° Fahrenheit, by 2035.

“Americans want President Obama to protect our beautiful public lands from fracking pollution,” said Kassie Siegel, director of the Center for Biological Diversity’s Climate Law Institute. “This inherently dangerous technology contaminates our air and water and disrupts our climate. The president has a duty to protect our environment and our communities by standing up to the oil and gas industry and prohibiting fracking in these wonderful wild places.”

“Our public lands are a national treasure and a sacred trust passed by one generation of Americans to another,” said Drew Hudson of Environmental Action. “Fracking on public lands threatens the drinking water of millions of people, including the President’s daughters and everyone else here in Washington, D.C.

"It would also poison many of our last wild and pristine ecosystems," Hudson continued. "Fracking has no place on our public lands, and these citizens, more than half a million of them, are calling on the President and the Bureau of Land Management to say: ‘Yes we can ban fracking.’”

The submission of these comments comes just weeks after the Los Angeles Times revealed that the Environmental Protection Agency (EPA) shut down a fracking-related water contamination investigation in Dimock, PA, despite evidence that water there was polluted. The Los Angeles Times reported that regional EPA staff warned senior EPA officials that water tests revealed high levels of methane in the drinking water of a number of homes in Dimock. Instead of continuing the investigation, the EPA abruptly closed the case, stopped water deliveries to the residents and deemed the water there safe to drink. This week, concerned Americans have convened in New York and Pennsylvania to protest EPA’s apparent mishandling of the Dimock investigation.

“President Obama need look no further than Pennsylvania’s Allegheny National Forest to see fracking’s devastating effects on our public lands," concluded Karen Feridun, founder of Berks Gas Truth. "Fracking is a dangerous, destructive practice that perpetuates our reliance on outmoded forms of energy. It has no more place on our public lands than it has in our energy future.”