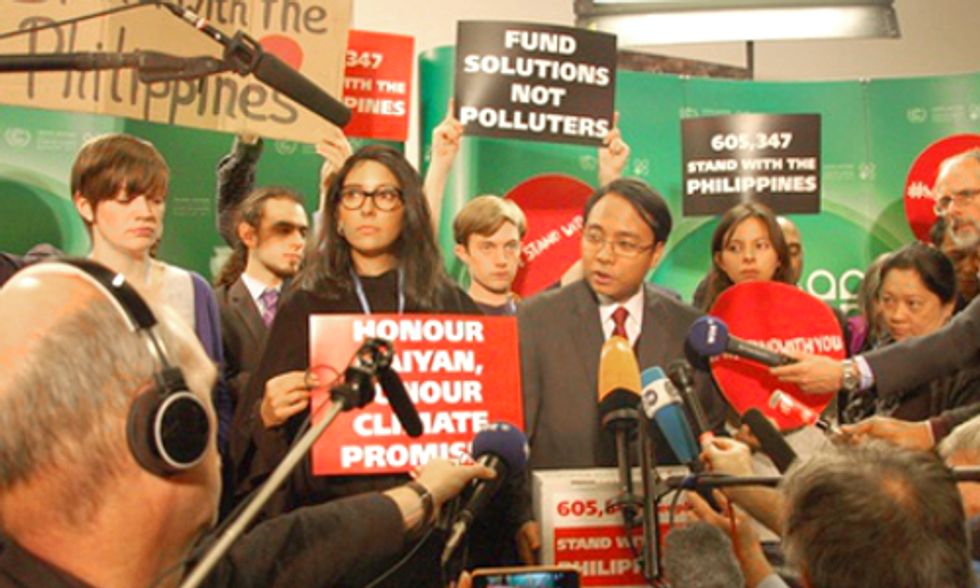 Civil society groups and young people joined Avaaz, 350.org and Filipino climate negotiator Yeb Saño at the UN Climate Talks today, to deliver more than 600,000 signatures from people around the world who are standing with the Philippines to demand progress here in Warsaw.

Yeb Saño's call was supported by similar petitions from organizations around the world, demanding meaningful action at the UN climate talks in Warsaw. Photo credit: 350.org

We are deeply moved and deeply touched by this expression of solidarity from hundreds of thousands of people and we are here to deliver their voices into this process, into this national stadium here in Warsaw. We hope that they can create the kind of impact that people around the world—billions and billions—are desiring.

This is a call, once and for all, to take ambitious steps to address climate change, which is now affecting lives and livelihoods. We are very glad and heartened to see this kind of solidarity being expressed by civil society, especially by many young people here. I cannot thank them enough for what they have done in supporting the call for action in the climate negotiations.

Last week, in an unprecedented move for an official negotiator, Yeb Saño authored a petition on Avaaz calling for “major steps forward” here in Warsaw on the issues of carbon pollution reduction, finance and “loss and damage,” a new system to help countries manage the risks and deal with the losses to climate disasters.

"Typhoon Haiyan shows that climate change is happening now and is claiming lives,” said Iain Keith, senior campaigner at Avaaz.org “The urgent need to cut carbon emissions and help vulnerable countries prepare for climate chaos could not be clearer and today over half a million people have joined Yeb Sano's campaign demanding action."

"Their message is clear: we urgently need rich polluting countries to honor their promises, and outline a clear plan on climate finance in Warsaw,” Keith concluded.

Saño's call was supported by similar petitions from 350.org, MoveOn, Friends of the Earth, CREDO Action, Forecast the Facts, SustainUS, 18 Million Rising, and other organizations. In total, more than 600,000 people have signed on to these calls for immediate action. Many organizations, including those listed above, are also fundraising for immediate relief in the Philippines.

“The climate-related disaster in the Philippines is an urgent call to action which has been echoed around the world,” said Hoda Baraka, global communications manager for 350.org. “We stand with the Philippines to honor the victims of this tragedy—and all those impacted by climate change—and shine a light on the real culprits: the fossil fuel industry.”

The typhoon, Yeb Saño’s emotional appeal for action and his commitment to fast throughout the talks, has inspired a widespread show of global solidarity. In Warsaw, a number of delegates at the talks are fasting in solidarity with Saño. This week, hundreds—perhaps thousands—of people are expected to join the voluntary fast for at least a day. On Thursday evening, candlelit vigils united by the message #WeStandWithYou are planned around the world.

“The climate justice movement is gaining momentum every day,” said Silje Lundberg, from Young Friends of the Earth Norway. “Young people stood with the Philippines after Typhoon Bopha and we continue to do so, now by fasting in solidarity after another super typhoon. We refuse to accept inaction and will be doing everything we can to put pressure on our governments and the polluters that stand in the way of progress.”

Despite the climate-related tragedy in the Philippines, the Warsaw climate talks have been plagued by a lack of ambition from rich countries. These nations have yet to offer serious financial commitments or up their levels of ambition to cut emissions. Instead, nations like Japan and Australia are backing away from previously made commitments.

Super Typhoon Haiyan (called Yolanda by many in the Philippines) was the strongest tropical cyclone to make landfall in world history. There are several ways in which climate change can affect typhoons like Haiyan, and will continue to do so in the future, including: increasing sea surface temperatures, adding more energy to storms; increasing the amount of precipitation associated with tropical cyclones, because warm air holds more water than cold; and, causing sea level rise which increases the destructive power of storm surges.

After a year of storms, droughts, wildfires and flooding around the world, Typhoon Haiyan has helped solidify the connection between extreme weather and climate change in the mainstream media and public consciousness. In a recent speech, UN Secretary General Ban Ki Moon connected the typhoon to climate change, calling it an “urgent warning."

On Saturday, British Prime Minister David Cameron said, “evidence seems to me to be growing” that typhoons like Haiyan are connected to climate change and that scientists are “giving us a very certain message” about the threat of the climate crisis.

Below, filmmaker James Shikada edited down Yeb Sano's impassioned speech, pleaing for urgent action at the UN climate talks, and paired it with images of destruction from Super Typhoon Haiyan: