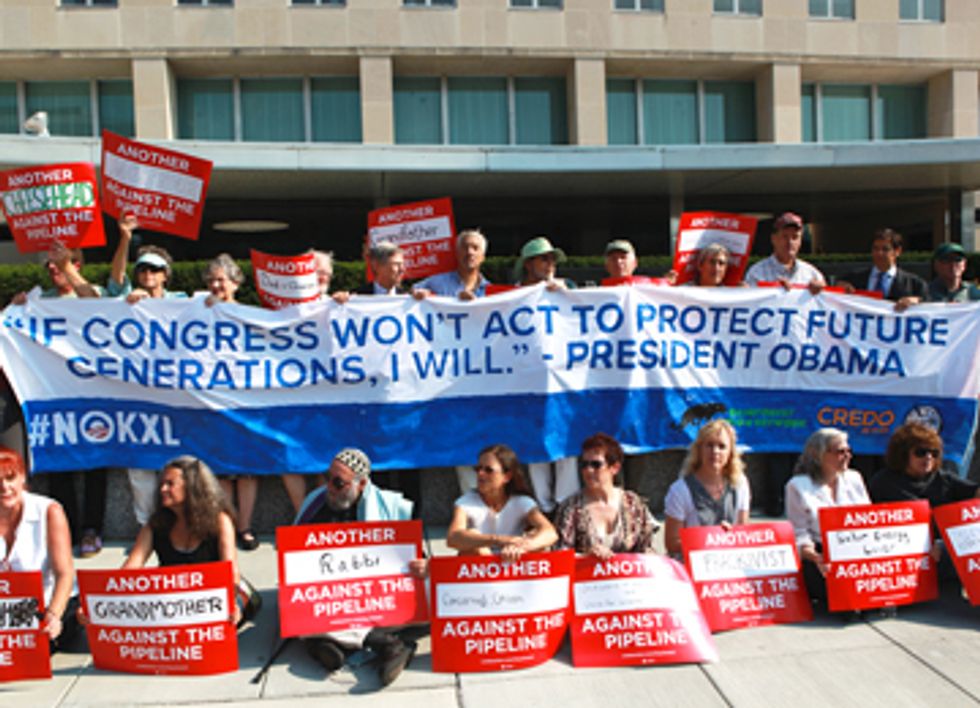 CREDO The Other 98% Rainforest Action Network

The sit-in is the second act of civil disobedience that CREDO, Rainforest Action Network and The Other 98% have organized to maintain pressure on President Obama to keep his promise to fight climate change by rejecting the Keystone XL pipeline.

The protest was held at the State Department in the wake of the announcement that an Inspector General is launching an investigation into Environmental Resources Management (ERM), the contractor that drafted the latest controversial environmental analysis of the Keystone XL pipeline. Recent revelations show that ERM failed to disclose ties with TransCanada, the foreign oil company seeking approval to build the pipeline through American soil, and with the powerful oil lobby, the American Petroleum Institute. In November 2011, President Obama postponed a decision on the pipeline until 2013, in the midst of a delegitimized review process conducted by another oil industry-compromised contractor, Cardno Entrix.

“The State Department has been working to determine what’s in the oil industry’s interest, not what’s in the national interest,” said Becky Bond, CREDO's political director. “The Keystone XL pipeline will accelerate climate change, and President Obama must make good on his climate promises by rejecting it.”

Among the people risking arrest and protesting were grassroots activists who helped elect President Obama in 2008 and 2012, including activists who currently volunteer for Obama’s campaign arm, Organizing for Action (OFA).

"History will not judge us kindly if we put the profits of a foreign oil company before the fight against climate change," said Jim Sandoe, Lancaster County director of OFA, who risked arrest at today’s action. "It's my hope that President Obama will make good on his promise to fight climate change and will reject the Keystone XL pipeline."

"People are taking dignified action today to draw a line in the sand against oil-fueled politics and for a clean energy future for everyone," said Scott Parkin, senior campaigner at Rainforest Action Network. "Its past time for the President to fight for our climate with more than just words and put the Keystone XL pipeline proposal to bed.”

"How many times do the American people need to catch the State Department in bed with Big Oil before John Kerry and the President take action to stop this dirty pipeline?" said John Sellers, executive director of The Other 98%.

More than 70,000 people have signed the Pledge of Resistance to risk arrest in peaceful, dignified civil disobedience, if President Obama’s administration recommends approval of the Keystone XL pipeline. Today’s action is the second civil disobedience action the groups have organized to maintain pressure on the president to keep his promise to fight climate change and reject the Keystone XL pipeline.