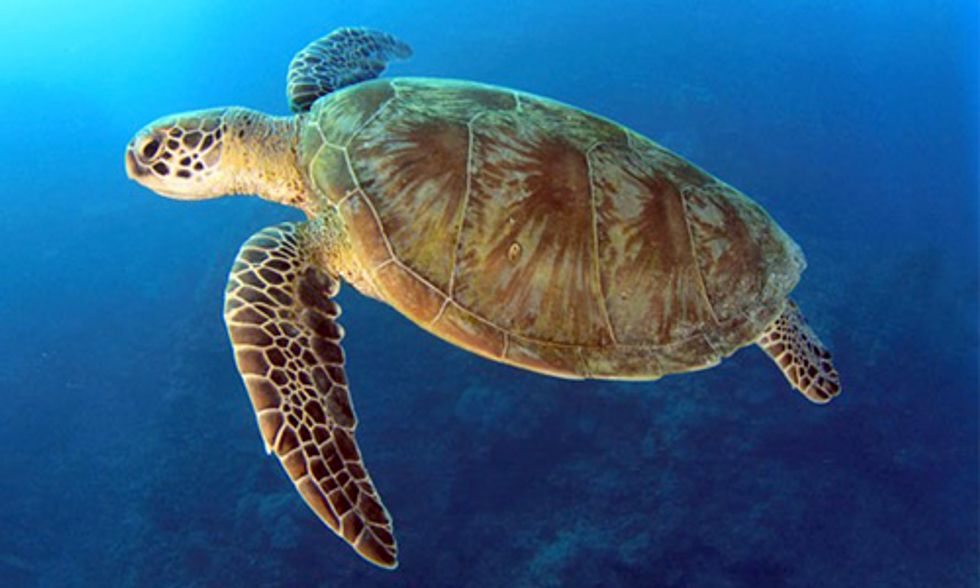 We know that ocean plastic can have a devastating impact on aquatic life such as seabirds, fish and whales. Now, researchers have found that 60 percent of post-hatchling loggerhead turtles stranded on southern Cape beaches in South Africa have been impacted by growing quantities of human-caused debris such as plastic fragments, packaging and fibers.

South Africa’s beaches are inundated with plastic. According to data released by Plastics South Africa, there are roughly 400 pieces of plastic per square meter.

A new study published in Marine Pollution Bulletin last month reported that 24 out of 40 of loggerhead turtles died within two months of stranding in April 2015. Of the turtles that died, 16 had ingested plastic. Gruesomely, 11 of these turtles died because plastic was blocking their digestive tracts or bladders.

Here are other key points from the study, as reported by South Africa's Times Live:

"Our results indicate that the amount and diversity of plastic ingested by post-hatchling loggerhead turtles off South Africa have increased over the last four decades, and now kill some turtles," the study says.

South Africa’s beaches are inundated with plastic, the Sunday Times reported in December. According to data released by Plastics South Africa, there are roughly 400 pieces of plastic per square meter. Another study found that South Africa ranks as the 11th worst country for dumping plastics in the ocean, between Bangladesh and India, the publication noted.

The turtle study's lead author, Peter Ryan of the Percy FitzPatrick Institute of African Ornithology and the DST-NRF's Centre of Excellence at the University of Cape Town, told the Sunday Times that South Africa needs multiple strategies to clean up its plastic problem.

“There’s nothing wrong with plastic—the problem is what people do with it‚” Ryan said‚ explaining that half of South Africa’s solid waste does not go into formal waste streams.

He also pointed out that plastic packaging such as candy wrappers are difficult to recycle.

“Every time you do one of these (beach litter) surveys you discover a whole new kind of packaging‚” Ryan said. “We need to be more proactive about how we package things.”

Ryan, however, said that a solution is possible.

“It’s a question of making sure that we dispose of plastic properly and working towards making sure there is a value attached to waste plastic‚” he said. “It’s a completely solvable problem.”

A few months after saving the first turtle, the researchers found another olive ridley in Costa Rica with plastic lodged deeply in its nostril—this time a 5-inch plastic fork.

Thankfully, the research team was able to relieve both turtles, but as Dr. George Shillinger, the executive director of the Monterey, California-based conservation nonprofit, told EcoWatch, it's “just the tip of the iceberg.”

“This was an isolated incident involving a single turtle in a small area off a nesting beach in Costa Rica," Shillinger said. "Just imagine globally what’s happening.”

Last year, researchers from the Commonwealth Scientific and Industrial Research Organization in Australia and Imperial College London released a report with the startling finding that 90 percent of seabirds today have eaten plastic, and if humans don’t stop dumping plastic into the ocean, it’s predicted that 99 percent of seabirds will swallow plastic by 2050.

When asked if this trend is also happening with turtles, Shillinger replied without hesitation: “Totally. Turtles are occupying the same habitats … Without a doubt these animals are consuming plastics in areas where they’d otherwise go to consume prey.”

Approximately 8 million metric tons of plastic waste is dumped into our oceans every year, and the pollution is only getting worse as consumer use of plastic and plastic-intensive goods intensifies in emerging countries.

Not only that, an alarming study by the University of Delaware physical oceanographer Tobias Kukulka reported that there might be much more plastic than what’s estimated.

“My research has shown that ocean turbulence actually mixes plastics and other pollutants down into the water column despite their buoyancy,” Kukulka said, according to UD Daily. “This means that surface measurements could be wildly off and the concentration of plastic in the marine environment may be significantly higher than we thought.”