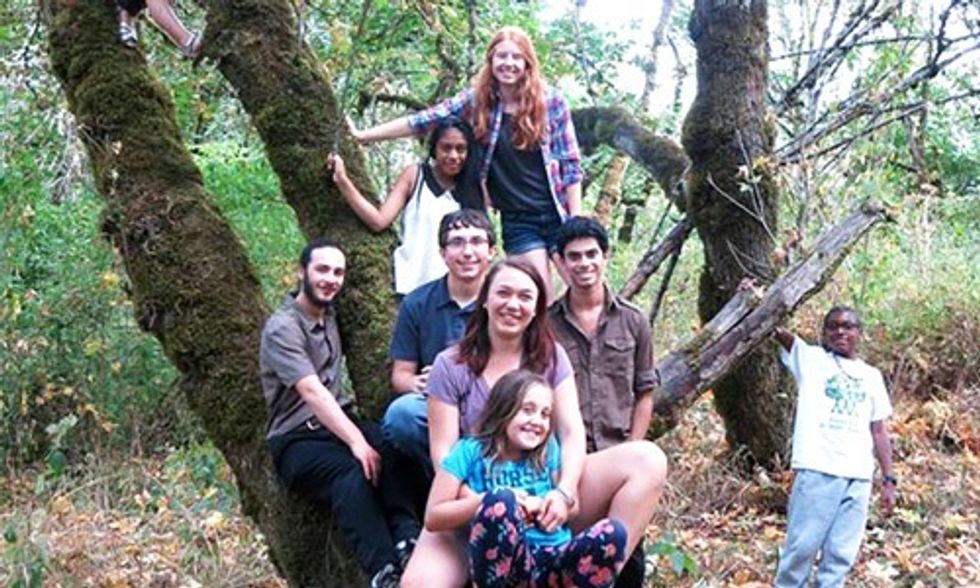 Just weeks after 21 young people from across the U.S. filed a landmark constitutional climate change lawsuit against the federal government and days before Pope Francis visits the U.S. and Pennsylvania, six youth file lawsuit against Gov. Tom Wolf and six state agencies, including the Department of Environmental Protection (DEP) and the Pennsylvania Environmental Quality Board.

Eight out of the 21 youth that filed a landmark constitutional climate change lawsuit against the federal government in the U.S. District Court for the District of Oregon. Photo credit: Our Children's Trust

The plaintiffs are seeking to protect their constitutional rights to clean air, pure water and other essential natural resources, which they rely on for their survival and wellbeing, but they feel are currently threatened by climate change. They are asking the defendants to take steps necessary to regulate Pennsylvania’s carbon dioxide and other greenhouse gases consistent with the Commonwealth’s duty and obligations as public trustee under Article I, Section 27 of the Pennsylvania Constitution to conserve and maintain public natural resources, including the atmosphere, for the benefit of present and future generations.

Their complaint asserts that defendants are failing to fulfill their trustee obligations to meet the Commonwealth’s Article I, Section 27 requirements by failing to regulate CO2 emissions, as evidenced by the current harmful impacts of climate change within Pennsylvania, such as extreme weather events, rising temperatures and disruptions to the hydrological cycle.

“Through our work petitioning the DEP, I’ve learned so much and so has the DEP,” said Funk. “Our petitions forced the DEP to take a more critical look at what they are doing to address climate change in our state. Despite multiple opportunities, the DEP failed to take the necessary steps to reduce greenhouse gas emissions and address climate change, making this lawsuit necessary. I hope that the DEP continues to learn and follows suit with other calls to action for decreasing greenhouse gas emissions. I hope they finally take action to do what our constitution requires them to do: preserve our atmosphere as a public trust for generations to come.”

The suit was filed by the Environmental and Natural Resources Law Clinic at Widener University Delaware Law School with Associate Professor of Law and Clinic Director Kenneth T. Kristl as lead counsel. The clinic prepares Delaware Law School students for practice by involving them in environmental cases and appeals like this one.

“This lawsuit relies upon the express language of Article I, Section 27 to require the Commonwealth of Pennsylvania, through key agencies and public officials, to carry out its constitutional obligation to 'conserve and maintain’ the atmosphere for the benefit of present and future generations,” Kristl said. “The six remarkable plaintiffs—and the millions of present and future generations of Pennsylvanians they represent—are entitled to a coordinated, effective response to the present danger and future threat that climate change poses to them. The clinic and its law students are proud to represent them in this critical lawsuit to vindicate the rights and benefits that the Pennsylvania Constitution guarantees them.”

The youth are hopeful for a positive ruling in part because they live in a state with the strongest judicial mandate in the country articulating the public trust obligations of government. A December 2013 ruling in Robinson Township v. Commonwealth of Pennsylvania, overturned a state law that limited citizens’ rights to block hydraulic fracturing in their communities, based on Article I, Section 27 of the Pennsylvania Constitution. The court found that the rights of present and future generations to trust resources, including air, water, state-owned lands and wildlife, are inherent and indefeasible, “and preserved rather than created by the Pennsylvania Constitution.”

“The constitutional public trust rights held by Pennsylvanians and all other people of the U.S., are expressed throughout our nation’s laws and legal history. The Pennsylvania Supreme Court strengthened and advanced these rights in its landmark Robinson Township decision and made clear that environmental rights are as important as all other rights. It’s time to apply those inalienable rights to the climate crisis,” said Julia Olson, executive director and chief legal counsel for Our Children’s Trust.

The complaint includes each plaintiff’s individual story and the ways in which they are harmed by climate change now and will be in the future if the court does not order the state to decrease atmospheric concentrations of CO2 to a safe level.

“Youth Plaintiffs are suffering both immediate and threatened injuries as a result of actions and inactions by Defendants,” the complaint states, “and will continue to suffer more injuries to their health, personal safety, bodily integrity, cultural and spiritual practices, economic stability, food security, property and recreational interests without the relief sought here.”

“It is our generation that will become the lawyers, doctors, politicians, engineers, artists, teachers and scientists for the future,” said 16-year-old plaintiff Rekha Dhillon-Richardson. “This generation of youth are the ones who are most affected by climate change, so we should have a legitimate and respected voice in change. We should be sitting at the table driving change forward because we are the future leaders of this planet.”

Ahead of GOP Debate, NextGen Climate Invokes Ronald Reagan to Urge 50% Renewables by 2030