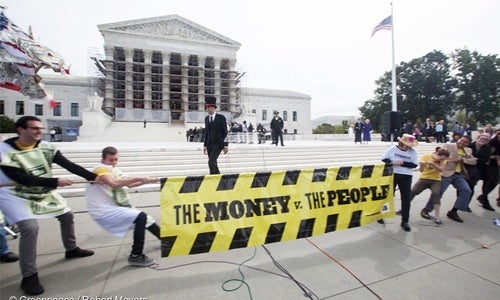 Last week marked the sixth anniversary of the Citizens United Supreme Court ruling, which unleashed unlimited corporate spending on our elections. Thinking about the widespread impact of this ruling, it’s easy to get pretty down on the state of our democracy. In addition to the immediate wreckage Citizens United caused in our democracy, there was a simultaneous attack on voting rights, leaving people in this country with less access to the polls than in 1965. 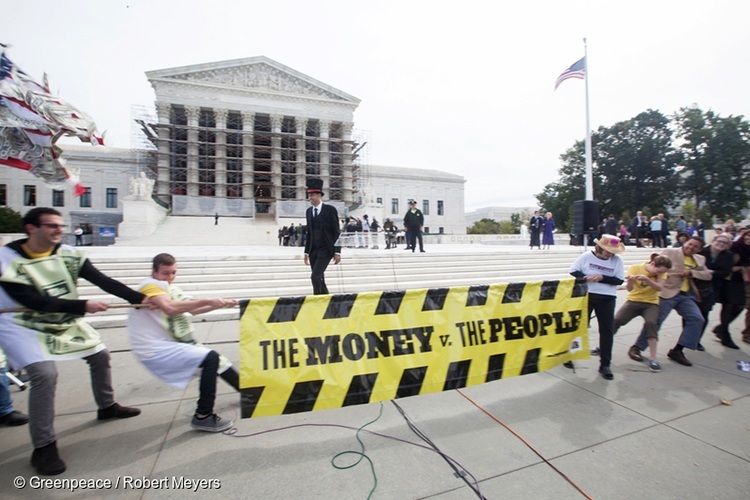 Activists dressed as $100 bills representing “The Money” have a tug of war with activists as “The People” in front of the Supreme Court. Photo credit: Greenpeace / Robert Meyers

Yeah, that can be pretty disheartening.

The good news is the American people are not putting up with any of this. People from Florida to Washington are determined to build a democracy in which everyone has equal voice and can rest assured that their vote won’t be immediately squashed by corporate money.

The best part is they’re winning.

There is still a lot to be done to fix our democracy. Feast your eyes on these six beautiful reasons that solutions are possible.

6. In Tallahassee, Florida voters overwhelmingly supported a sweeping set of ethics and campaign finance laws in 2014. The reforms included the creation of an ethics board, public campaign financing and a lower cap on individual contributions to candidates.

5. A unanimous state court in Texas ruled that a voter ID law that discriminated against African-American and Hispanic voters was unconstitutional. This law had disenfranchised more than 500,000 voters.

3. Meanwhile, voters in Seattle passed by a vote of 60 to 40 percent public financing of the city’s elections. This will initiate new system in which voters can distribute up to four $25 “democracy vouchers” to candidates. Who wouldn’t want a democracy voucher?

2. Hawaii typically has the lowest voter turnout nationwide. State legislators recently passed a much-needed bill that will allow residents to register and vote on the same day starting this year. This bill should increase voter participation with easier access to the polls.

1. If you listened to President Obama’s State of the Union address last week, you may have heard his tough talk on fixing democracy—“fixing our politics” to be exact. The White House reassured us this week that his strong rhetoric was not just lip service when officials said the president is seriously considering a “dark money” executive order that would require companies with government contracts to disclose their political contributions. If passed, the law would be a major step forward in increased transparency in political spending.

Now it’s time for the 2016 candidates to follow the lead of our current president by proposing real solutions to our broken, but fixable, democracy.

Send a letter today asking all the candidates to take the #fixdemocracy pledge.

Citizens United certainly damaged our democracy, but by working together and challenging our lawmakers across the country, we can fix it.