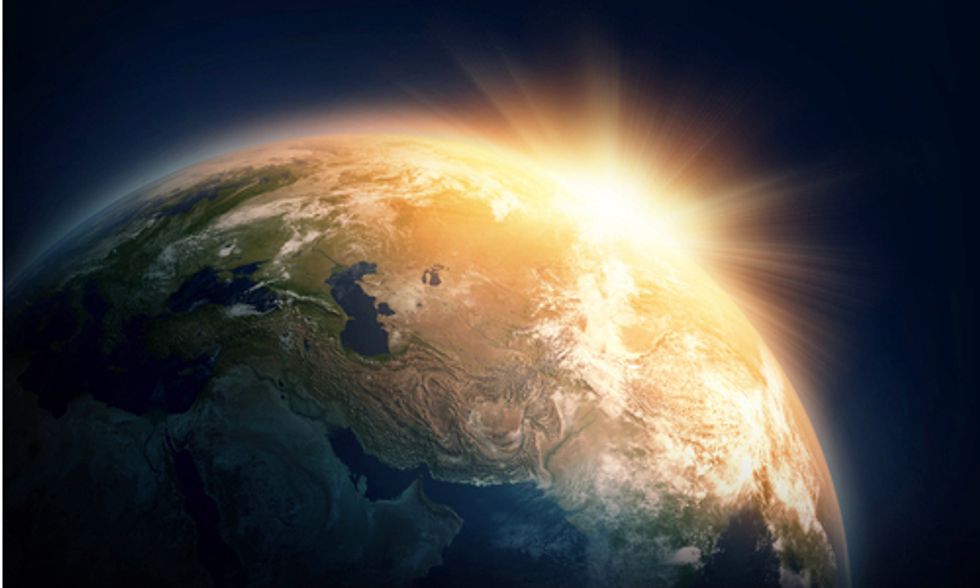 There is nothing controversial about the work of climatologist Michael Mann, director of Penn State’s Earth System Science Center. His innovative research helped recreate the Earth’s historical temperature record and separate the noise of natural weather fluctuations from the steady signal of real climate change. As such, Mann has played a significant role in the development of the overwhelming scientific consensus—the planet is warming and human activities are responsible.

It’s another story in the realm of politics, where Mann, an affable scientist, has been dragged into the fray by diehard climate change deniers. He was a central figure in the trumped-up “climategate” scandal, accused with other scientists of fraud by conservative bloggers and pundits before being vindicated by eight separate independent investigations. He was later the subject of an “academic witch-hunt” by former Virginia Attorney General Ken Cuccinelli until a circuit court judge ruled that Cuccinelli had provided no “objective basis” for his crusade.

But if Mann began as an unwilling combatant in the public debate, he has since become a fierce defender of scientific discourse. He’s currently suing for defamation the National Review, right-wing columnist Mark Steyn and the Competitive Enterprise —a libertarian think tank dubbed “a factory for global warming skepticism” by The Washington Post that has received funding from ExxonMobil, the American Petroleum Institute and Arch Coal, among others.

Mann believes that climate change “skepticism” could not exist if the public had a better understanding of how science works—if they got that climatology is based on the same scientific method as any other field of knowledge.

BillMoyers.com spoke with Michael Mann, and here are six things he’d like you to understand about the scientific consensus on global warming.

1. Climate Scientists are the Real Skeptics

Mann: Too often we allow the forces of anti-science, the forces of denialism, or contrarianism, to somehow frame their position as one of skepticism. But denying mainstream, well-established science based on arguments that don’t stand up to scrutiny, that’s not skepticism. That’s pseudo-skepticism.

Real scientists embrace skepticism because that’s what moves science forward. That’s the self-correcting machinery, to use the language of Carl Sagan, which keeps science on this inexorable course toward a better understanding of the way the world works. If your ideas are wrong, if your theories are wrong, if they don’t hold up, if the data don’t support them, if other studies don’t come to the same conclusion, then science moves on, and it searches for a better answer. Scientists are always trying to find holes in each other’s proposed ideas, or in their own proposed ideas.

2. The Science of Climate Change is Based on Many Sources of Data and Many Different Methodologies

Mann: This is what attracted me to climate science. I started out as a theoretical physicist. But then I was captivated by the fact that there were scientists who were using physics and math to model this amazingly complicated system that we call the earth’s climate. I realized that there was an opportunity to work on this incredibly interdisciplinary problem that involves the physics of the atmosphere and the ocean and the ice sheets and the way they all interact with each other, and their interaction with incoming sunlight and the outgoing heat energy from the surface.

There’s also biology. You have to understand Earth’s carbon cycle, the balance of carbon in the atmosphere and ocean, which involves living processes. There is important chemistry; the chemistry of greenhouse gases, the geochemistry of the oceans.

Some people claim that climate models can’t be trusted because they haven’t made successful projections. That’s just dead wrong.

So this has become, in my view, one of the most interdisciplinary science problems that exists and that’s part of what makes it so exciting.

3. The Models Have Proven Accurate

Mann: The science isn’t based only on a bunch of climate models, we also have a lot of observations. We can test the principles against what we see in the real world.

Some people claim that climate models can’t be trusted because they haven’t made successful projections. That’s just dead wrong. Climate scientists have a very strong track record of having made predictions like how much cooling we would expect after the eruption of Mount Pinatubo, back in 1991. James Hansen of the NASA Goddard Institute for Space Studies successfully predicted the cooling that would be observed using a climate model. Hansen also successfully predicted two decades of warming in advance, using a climate model back in the 1980s that was quite crude.

4. If Anything, Global Warming is Probably Worse Than Scientists Say

We asked Mann about a peer-reviewed paper published in 2012 in the journal Global Environmental Change. It reviewed several studies and found that at least some of the attributes of global warming had been under-predicted by the UN’s Intergovernmental Panel on Climate Change. The authors of the study concluded that scientists tend to err “on the side of least drama.”

Mann: As Naomi Oreskes describes in that study, there’s an innate tendency in the world of science to be conservative, because the greatest risk is to stick your neck out there with a hypothesis that doesn’t stand up to scrutiny. Scientists are intrinsically conservative because they don’t want to be proven wrong. If you are perennially wrong, if your predictions are perennially bad, it will reflect negatively on your reputation as a scientist.

We may have been too conservative—the climate models may actually be underestimating the rate at which some changes are taking place.

Now, add to that innate scientific reticence all of the additional pressure from a very well-funded and well-organized disinformation campaign by industry interests looking to discredit the case for concern over climate change. They go after individual scientists. They attack them, they vilify them. They haul them up before Congress —scientists find themselves in the hot seat in hostile hearings, led by politicians who are in the pay of the fossil fuel industry.

So we may have been too conservative—the climate models may actually be underestimating the rate at which some changes are taking place. For example, the loss of ice from the west Antarctic ice sheet—there were some recent studies suggesting that that’s taking place sooner, and with a greater magnitude, than originally predicted.

Mann: I think the process of science is foreign to the public because it’s so different from the 24/7 news cycle-driven world that we live in, where we are inundated with rapidly changing information. That’s not the pace at which science operates.

Every once and a while there’s some contrarian paper that gets published in a journal and immediately the climate change contrarians trumpet this new study and it gets air-time on Fox News and Rush Limbaugh, and inevitably—in almost every case that I can think of—the study turns out to have been fundamentally flawed.

But it may take a year before a peer-reviewed article assessing that particular study is published. It takes time for scientists to independently look at the data, test the hypotheses, and either replicate or refute an analysis in a previously published article.

Scientists also present findings at meetings, and other scientists may criticize them, they may ask questions or make comments. There’s feedback that takes place at these scientific meetings.

So what happens is, over the course of years—with many meetings and exchanges and the peer-reviewed literature —these things get sorted out. Studies either get replicated or refuted on a time-scale that reflects the slow gears of science.

But it becomes very easy for those looking to throw doubt and confusion into the picture to select some late-breaking study, take it out of context, milk it for all it’s worth and neglect the fact that there’s a much larger body of scientific research upon which our understanding is based.

We have what are called assessment processes. For example, the National Academy of Sciences has done an assessment of the science of climate change every few years. There was a study published not too long ago by the National Academy of Sciences in which they reviewed all of the existing climate literature, and these assessment reports look at what’s robust—what findings stand up when you look across the literature. Those are the findings that we put the greatest stock in—those findings that have been replicated by multiple studies over a number of years, and when you step back and you look at the science of climate change through these assessment reports, what they find is that there is literally no scientific debate about whether climate change is real, whether it’s caused by us or even whether it represents a risk.

Now, there are uncertainties about the specific impacts that climate change might have. And when you start getting very specific about what may happen in the future or look at relatively small regions, the uncertainties get larger.

And that’s also what these assessment reports are about: Determining where the greatest uncertainties remain. And it’s those areas that attract the interest of scientists. It’s not very interesting to validate once again something that was already known. That’s not what drives scientists.

If we don’t speak out, then we leave a vacuum in the discussion. And that vacuum will be filled by industry-funded disinformation.

6. Climatologists are Beginning to Recognize That They Have to Speak Up

Mann: I wrote an op-ed in The New York Times earlier this year in which I made a very strong and impassioned plea to my fellow scientists to be willing to advocate for an informed public discourse. Not that they need to advocate for specific policies to deal with climate change, but to be willing to step up and participate in the larger public discourse over what we know about the scientific evidence.

Part of the reason for the attacks against me and other scientists who have participated prominently in the public discussion is to send a warning signal to other scientists who might think about speaking out. But if we don’t speak out, then we leave a vacuum in the discussion. And that vacuum will be filled by industry-funded disinformation—the anti-scientific claims of industry front groups and their paid advocates. All of society suffers if scientists are not willing to participate in this discussion.

Part of what makes me optimistic about the outlook for this larger discussion is that the younger generation of scientists seems far more engaged in outreach and communication. They’re far more likely to participate in social media and do what they have to to get their thoughts out into the public sphere.