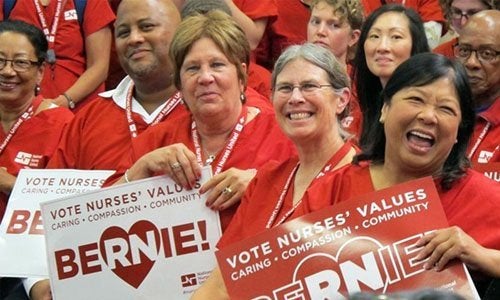 The more than 100,000 people who have jammed into arenas in Los Angeles, Portland, Seattle, Phoenix, Houston, Dallas, New Orleans, Madison and other cities should be a wake up call for anyone still on the sidelines in the critical 2016 election campaign.

National Nurses United, I’m proud to say, has endorsed Sen. Bernie Sanders for many of the same reasons that have brought those 100,000 people to their feet.

In a survey released by @NationalNurses, @BernieSanders scored 100% compared to @HillaryClinton who scored 43%: http://t.co/AEuEVQE8IO

Bernie Sanders aligns perfectly with nurses on the most critical problems facing our nation, from income inequality to guaranteeing healthcare to all to holding Wall Street and corporations to account to opening the doors to college education for everyone to racial justice to the climate crisis.

Those are the same issues that animate nurses when we talk about voting for nurses’ values—caring, compassion and community to heal America.

But we also support the Sanders moment because of the rare opportunity his campaign represents to not just speak truth to power, but to join movements together to change our country. To stand as a social movement against the obscene wealth that controls our lives, starves our communities, destroys our people and expand a populist movement that put human life before profit.

All the establishment pundits who are scrambling for ways to dismiss the outpouring of excitement for his campaign and to marginalize those who have filled the stadiums increasingly look like cranks trying to stop an approaching train.

Bernie can’t win. Exactly what they said about President Barack Obama at this parallel point in 2007. American history, of course, is filled with examples of change that could never occur, until it does—abolition of slavery, votes for women, ending legal segregation, the right to same sex marriage. Sanders is used to the naysayers. They said he couldn’t win running for mayor of Burlington, as an independent running for Congress and then Senate and he won them all. That’s why we have elections—to let the voters, not the “experts,” decide.

He’s not drawing African American and Latino voters. As his campaign and platform become better known, that is changing, evident in the multi-racial crowd at his overflow Los Angeles rally and support from young artists like Lil B and Killer Mike. At a time when Cecil the lion evokes more outrage than the death of Sandra Bland, Bernie is increasingly speaking out and has advanced a platform with a call for a “societal transformation” to end police violence, mass incarceration and “institutional racism.” Nurses hold every life in their hands. Nurses know why Black Lives Matter needs to be amplified and so does Bernie Sanders.