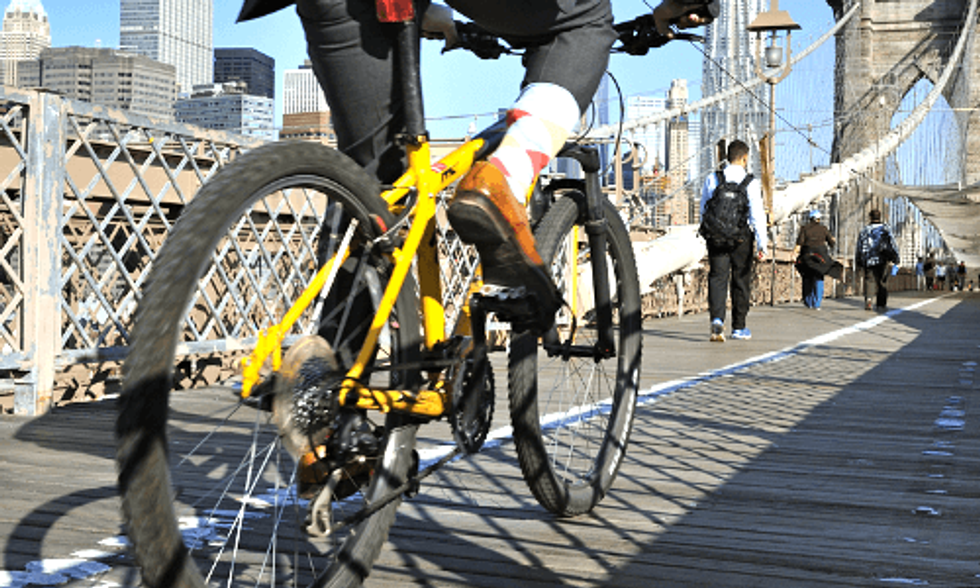 Have you noticed more two-wheelers on your commute, especially if you live in a city? According to the U.S. Census Bureau, the number of Americans who travel to work by bike increased an incredible 60 percent over the last decade, making it the largest percentage increase of all commuting modes.

People choose to bike for many reasons (it saves money, it's good for health), but here are six big reasons more Americans are leaving the car keys at home:

Commuting to work via bike has increased 60 percent over the last decade. Pictured: A biker zipping to Manhattan over the Brooklyn Bridge in a bike lane.
Photo Credit: T photography / Shutterstock

1. Cities are wooing millenials. The Pew Charitable Trusts reported that communities are trying to build a cycling-friendly reputation to attract millennials and the creative and economic energy that comes with them. “States and cities are competing for the most mobile generation ever and so the job creators and the innovators are really pushing for these amenities," said Bill Nesper of the League of American Bicyclists in the report. “Baby boomers want to live near millennial children and their grandchildren, so we're really seeing Washington and most major cities seeing this as a way to attract and keep talented people." Amenities such as ...

2. Bike infrastructure. Paths dedicated to two-wheelers are popping up in climates of all sorts, from sunny Malibu to chilly Anchorage. According to the Alaska Dispatch News, the Alaskan city is adding 3.75 miles of bike lanes to its existing 15 miles, with more expected next summer.

The reason bikers love bike paths? Simply because they don't have to contend with scary motor traffic. (It's also a win for cities since it helps reduce congestion).

“Bike lanes give a dedicated lane for people to bicycle," Lori Schanche, non-motorized transportation coordinator for the Municipality of Anchorage told the publication. “It's a lot safer for everyone all around." In fact, Pew's research noted that across the country, there's been a 31 percent decline in serious injuries over the last 20 years, even though there are more people riding on bikes—fatalities for bike commuters fell from 21 per 10,000 trips in 1980 to only nine in 2008.

With these safety measures, cities have seen an uptick in pedaling. According to People for Bikes, after Honolulu installed protected bike barriers on one of its streets last year, biking increased by a whopping 71 percent. In Brooklyn, nearly 200 percent. Check out the graph below:

3. Women. So you know that 60 percent increase in biking we cited in the beginning of this article? Well, most of the new riders are men. The Census Bureau found that the rate of bicycle commuting for men was more than double that of women. There are many reasons why women bike less than men, but it comes down to safety concerns, convenience, confidence, feeling welcome in male-dominated bike shops and belonging to a community that welcomes women riders, the League of American Bicyclists noted in a report.

However, when cities improved biking infrastructure, the number of female riders shot up, the report found. Some examples:

The widespread adoption of family-friendly cargo biking has surely encouraged more women to pick up riding as well; they're kind of like pedal-powered minivans.

4. Bike-friendly legislation. Cities have created laws that better accommodate bicyclists. For example, Portland, Oregon (which has the highest bicycle-commuting rate in the country at 6.1 percent) lowered the speed limit on neighborhood greenways by five miles to 20 miles per hour in order to reduce the crash and fatality rate. Portland, as well as other bike-centric communities, also has bicycle-sensitive traffic signals and speed bumps to calm car traffic.

Some communities are also making sure that bikers have a place to park their ride. A report from the League of American Bicyclists said that a Santa Monica, California ordinance stipulates that destinations have an adequate supply of bike racks, and also requires event organizers to have monitored bicycle parking for 200-250 bikes if attendance is expected to reach 1,000 or more, as well as three attendants to guard the area.

5. Bike shares. A flurry of cities have adopted bike sharing, and cities are seeing huge numbers of participants. According to a post from architect and urban planning firm Opticos Design, Austin, Texas's new bike sharing program set a nationwide record at last year's South by Southwest (SXSW) music festival. "The 10-day event held March 7–16 saw an average of 6.4 checkouts per bike per day. On Friday, March 14, that number jumped to 2,774 checkouts, an average of 10.1 checkouts per bike for the day, beating the previous record held by New York City's Citi Bike program. The total number of checkouts during SXSW reached 17,000," the post read.

Although New York City had a rough start with its Citi Bikes, its 6,000-strong fleet will double and expand into other boroughs in two years. Photo Credit: Wikimedia

6. The green movement. For many Americans, it's no longer a rite-of-passage to own a car. We reported that car ownership is declining and the proportion of residents bicycling to work increased in 85 out of 100 of America's largest urbanized areas between 2000 and 2011. More than half of the U.S. population lives within five miles of their workplace, making it easier to commute via bike. It also comes down to changing attitudes about sustainability, the improvement in public transportation and the growth of the sharing economy.

With the Obama administration OK'ing Shell's plan to drill for oil in the Arctic Ocean, it's clear that the we must look to other ways to curb consumption of dirty fossil fuels. In fact, biking just two days a week can reduce carbon pollution by an average of two tons per year, the Environmental Protection Agency says.

Now that National Biking Month is in full swing and Bike to Work Day happening this Friday, perhaps you should consider breaking out that pollution-free vehicle to get to work.