6 Reasons to Celebrate the Signing of the Clean Water Rule 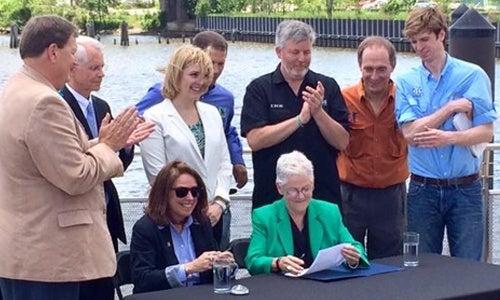 Yesterday our country took one of its biggest steps ever to protect clean water with a new standard that restores safeguards to nearly 2 million miles of headwaters and streams and tens of millions of acres of wetlands.

1 in 3 Americans get water from streams & wetlands that lacked clear protections – until yesterday. #CleanWaterRules pic.twitter.com/gMvNw9howt

Building on decades of successful water protections, the Clean Water Rule will defend sources of safe drinking water for one in every three Americans by clarifying protections that had come under challenge from some of the country’s biggest polluters.

The new rule is a victory for all of us, if we can keep it from being thwarted by its foes and their allies in Congress.

Republican leaders in the House and Senate have already teed up a showdown over this needed rule, a largely partisan battle that pits oil and gas companies, shopping center builders, Big Agriculture and others against the basic American right to clean water.

The Republican-led House sided earlier this month with the polluters.

We’re counting on the Senate to stand up for clean water.

For more than four decades, American waters have been protected by the Clean Water Act, passed by overwhelming Republican and Democratic majorities in both houses of Congress in 1972.

In recent years, though, this important law has come under withering attack by interests that stand to profit from weakening the protections the law provides.

In essence, these groups claim the Clean Water Act shouldn’t apply to vast reaches of streams and wetlands because these bodies of water are too remote, too small or too dependent on seasonal rains to count.

That, of course, is nonsense.

Even mighty rivers start small, taking on volume from wetlands and tributaries as water flows downhill.

Pollution at any point along the journey threatens all the waters downstream.

That’s why state and local officials, members of Congress, advocates for industry, agriculture, the environment and others, as well as members of the public at large, have asked the U.S. Environmental Protection Agency and the Army Corps of Engineers to clarify the reach of the Clean Water Act.

The agencies have participated in more than 400 meetings on the issue nationwide. Over just the past year, they’ve reviewed more than a million comments from people who depend on clean water for things like raising food, running their businesses, attracting tourism or fishing and hunting.

And here’s what they’ve found: 87 percent of the people who commented want the waters of America protected.