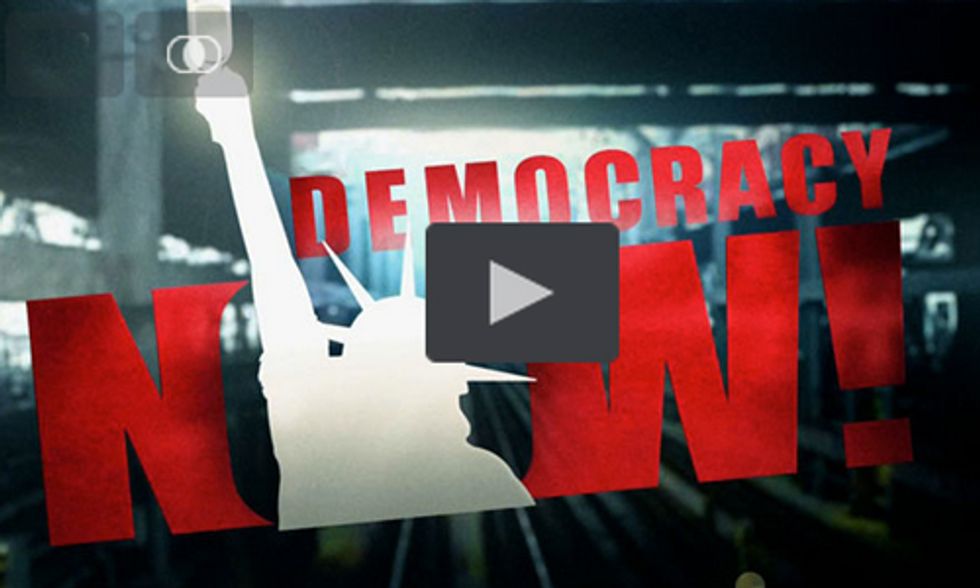 EcoWatch is featuring live broadcasting via Democracy Now! from Dec. 8 - Dec. 12, 8 to 9 a.m., from the United Nations Climate Change Conference in Lima, Peru. Diplomats from around the world are gathered in Lima to reach a draft agreement to limit greenhouse gas emissions that cause global warming, which will be finalized in 2015.

Here are the segments from Tuesday, Dec. 9:

"They Have Destroyed Our Livelihood": Activists Protest Shell and Chevron at U.N. Climate Talks

At the United Nations Climate Change Conference in Lima, Peru, protesters gathered inside Monday to protest the invitation of oil giants Shell and Chevron to speak on summit panels. Democracy Now! producer Mike Burke was there when scores of summit delegates attempted to walk into an event featuring Shell climate change adviser David Hone.

As we broadcast from the United Nations Climate Summit in Lima, Peru, we speak with Pascoe Sabido of the Corporate Europe Observatory, which just released a new report titled "Corporate Conquistadors: The Many Ways Multinationals Both Drive and Profit From Climate Destruction." "This is COP 20. For 20 years we’ve been going without progressing to a fair and progressive climate deal that we need,” Sabido says. "One of the big reasons is the aggressive lobbying of the fossil fuel industry both at the national level and here at the talks." The new report is a joint project with Democracy Center and the Transnational Institute.

This year's U.N. Climate Change Conference in Peru marks the first time the talks have been held in an Amazon country. More than 70 percent of Peru's national territory is within the Amazon Basin. The founder and executive director of Amazon Watch, Atossa Soltani, joins us to talk about the significance of the U.N. climate summit taking place in Peru amidst long-term threats to the Amazon. Soltani also addresses the challenges facing developing countries with lucrative, but carbon-intensive energy resources, and whether the United States is being a responsible environmental steward for future generations. "When we lose the Amazon, we not only create emissions, but we lose the climate stabilizing function of the forest," Soltani says. "We're reaching a tipping point."

Today is “Gender Day” at the U.N. Climate Change Conference, a day that acknowledges the disproportionate impact of climate change on women, who make up 70 percent of the world's poor. We hear from a panel of indigenous women from around the world who met off-site Monday to share their solutions to climate change. The event, hosted by the Women's Earth and Climate Action Network, featured indigenous women leaders on the front lines of defending the Earth from exploitation by fossil fuel companies. Speakers included Patricia Gualinga, a Kichwa leader from Sarayaku, Ecuador, and her niece, Nina Gualinga. In 2012, the Sarayaku won a case against the Ecuadorean government after a foreign oil company was permitted to encroach on their land.

As we broadcast from the U.N. Climate Conference in Lima, Peru, where delegates from around the world are meeting on a global agreement to reduce greenhouse gas emissions that contribute to global warming, the first text of this year's draft has been released. We are joined by Pablo Solón, Bolivia's former ambassador to the United Nations and former chief negotiator on climate change. Now the executive director of Focus on the Global South, Solón was a presenter of the International Rights of Nature Tribunal, which also took place in Peru.

Climate Justice Activists From Around the World Show Solidarity with Philippines

Among the many protests at the United Nations Climate Change Conference was a solidarity action with the Philippines, which was hit by Typhoon Hagupit over the weekend. Some 900,000 people were forced to evacuate. We speak with participants from Chile, Africa and New Zealand, who all say the negotiators at COP 20 are taking positions that fail to reflect the urgency that is needed to address climate change for countries that are already being impacted.