6 Governors Who Refuse to Comply With Obama's Clean Power Plan 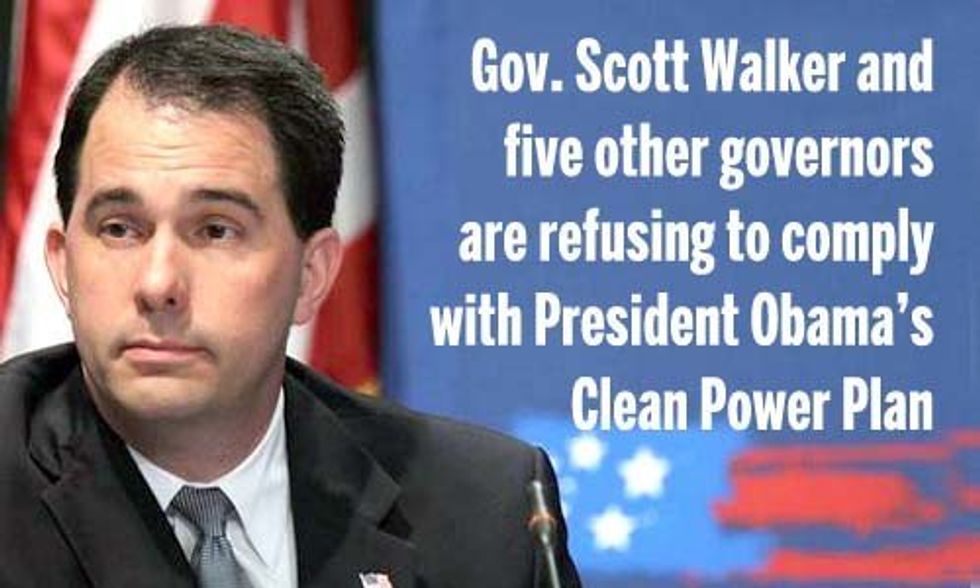 Next week, the U.S. Environmental Protection Agency (EPA) is expected to announce what may be the Obama administration's most far-reaching climate change initiative: its final rule for cleaning up existing electric power plants, the single largest source of U.S. carbon pollution. Dubbed the Clean Power Plan, it will require each state to submit its own individual strategy for cutting emissions.

The rule came under heavy fire when the EPA first floated the proposal a year ago. Shortly after it was announced, a dozen states and Murray Energy, the country's largest privately held coal mining company, challenged it in federal court. Although the lawsuits were dismissed last month because you can only contest a final rule, they were just the opening salvo of what promises to be a protracted legal battle.

In Congress, fossil fuel industry-funded lawmakers have introduced a bill that would give states the choice to opt out of the rule and postpone implementation until all legal challenges are resolved. Meanwhile, Senate Majority Leader Mitch McConnell—the top recipient of coal industry campaign contributions last year—has publicly urged state governors to violate federal law by refusing to submit rule compliance plans. So far, at least a half dozen governors—including presidential hopefuls Bobby Jindal of Louisiana and Scott Walker of Wisconsin—have heeded McConnell's call.

And there's more to come. A number of coal-producing states and business associations, including the U.S. Chamber of Commerce, are poised to sue after the final rule comes out. And at least one state attorney general, Oklahoma's Scott Pruitt, jumped the gun. He filed a lawsuit in early July seeking a court order declaring the rule exceeds the EPA's authority under the Clean Air Act, despite the fact the Supreme Court ruled otherwise in 2007. "The Clean Power Plan," Pruitt said in a statement, "is an unlawful attempt to expand federal bureaucrats' authority over states' energy economies in order to shut coal-fired power plants and eventually other sources of fossil fuel-generated electricity."

But why would anyone be against reducing U.S. reliance on coal? Coal-fired power plants are not only the largest source of U.S. carbon emissions—accounting for roughly 33 percent—they're also the leading industrial source of such toxic pollutants as mercury, nitrogen oxide and sulfur dioxide, which have been linked to a range of cancers and cardiovascular, respiratory and neurological diseases. All told, coal's lifecycle damage—from mining to processing to burning—costs Americans hundreds of billions of dollars annually. Given that there are viable alternatives, doesn't it make sense to transition to cleaner energy sources as soon as possible?

The standard response from Clean Power Plan opponents is cutting carbon will wreck the economy, the same fallacious argument industrial polluters have been making about environmental safeguards for decades. The reality is the benefits of environmental regulations far outweigh their costs.

For his part, McConnell insists the proposed rule is technologically unattainable, will dramatically increase electricity rates, and will throw "countless" people out of work. Echoing McConnell, West Virginia Attorney General Patrick Morrisey maintains it will have "devastating effects" on his state's jobs and economy by forcing some coal-fired power plants to close.

In fact, states can accomplish much more that the EPA's proposed carbon reduction targets. Many states have already shown that replacing dirty, outdated coal plants with renewable energy can actually lower electricity rates. And any job losses in the coal industry—which the latest Bureau of Labor Statistics data peg at only 70,000 people nationwide—will be more than offset by new jobs in renewable energy and other sectors. Even more encouraging, when it comes to the Clean Power Plan, more than half the states are already in good shape to meet the EPA's proposed near-term targets, according to the Union of Concerned Scientists (UCS), and more than a dozen are on track to exceed them.

The EPA's proposed goal to cut U.S. carbon emissions 30 percent below 2005 levels by 2030 is not only technologically feasible, it also underestimates what readily available, cost-effective renewable energy sources can achieve. According to a 2014 UCS analysis, the EPA could nearly double the amount of renewable energy projected for its state targets, from 12 percent of total 2030 U.S. electricity to 23 percent. That alone would increase the rule's emissions reductions from 30 percent to approximately 40 percent below 2005 levels by 2030.

"The Clean Power Plan does not adequately capture renewable energy deployment rates that states are already achieving," UCS found. "The plan also fails to reflect the continued growth and falling costs of renewable energy projected by market experts. Indeed, the EPA's proposal falls short of the national renewable energy levels that the U.S. Energy Information Administration (EIA) projects would occur in 2020 under a business-as-usual approach [and] the proposal's 2030 results are only marginally higher than the EIA's projections."

Replacing coal-fired electricity with carbon-free renewable power at worst has a marginal impact on the cost of electricity. At best, renewables lower rates.

Last year, the Lawrence Berkeley National Laboratory and National Renewable Energy Laboratory published a joint cost-benefit analysis of state standards requiring utilities to increase their use of renewables by a certain percentage by a specific year. Targets currently range from 10 percent by 2015 in Michigan and Wisconsin to 33 percent by 2020 in California. Their analysis—based on data from 24 of the 29 states with such standards—found the standards on average affected retail electricity rates by only one percent between 2010 and 2012, although there was a wide variation across states.

UCS energy analyst Jeff Deyette, a co-author of UCS's Clean Power Plan study, expects renewable standards to continue to reduce retail prices. "Most renewable energy technology costs are incurred up front," he said. "After the equipment is manufactured and installed, the 'fuel' —the sun or the wind—is free, which certainly is not the case with coal, natural gas or nuclear power plants. That fact helps stabilize electricity prices and lock in long-term savings."

The number of people working in the coal mining industry has declined dramatically over the last three decades, but not because of stricter pollution controls. The main culprits have been automation, higher worker productivity, and a shift from underground mining to surface mining and mountaintop removal, which require fewer workers. In 1983, 175,640 workers produced 782 million tons of coal, according to the EIA. Thirty years later, in 2013, the coal industry employed 79,400 people—60 percent less—who produced 985 million tons. Cheap natural gas, aging coal plant closures, and slow growth in electricity demand also have added to the coal industry's woes over the last few years.

Now consider the phenomenal job growth in the renewable energy sector. As of last November, the solar industry supported 157,500 full-timers and another 16,300 who worked at least 50 percent of their time on solar projects, according to the Solar Foundation. That represents a 22 percent jump over the previous year. The American Wind Energy Association, meanwhile, estimates its industry employed 73,000 workers at the end of 2014. Together, their combined workforce is three and a half times the size of the coal industry's.

Contrary to McConnell's dire predictions, the Clean Power Plan is projected to create tens of thousands of new jobs -- in the clean energy and energy efficiency sectors. A 2013 Synapse Energy Economics study calculated that job gains from carbon controls would more than compensate for the inevitable coal industry job losses. Synapse estimated an initial net gain of 76,000 jobs nationally in 2016 and 210,000 in 2020 if emissions dropped 26 percent from their peak levels in 2005. The actual EPA proposal would make deeper cuts, reducing power plant emissions 30 percent from 2005 levels by 2030. Granted those new jobs may not do much to prop up coal communities, but they could. There are a number of public and private initiatives underway in West Virginia and eastern Kentucky to diversify local economies. That's where McConnell should focus his attention, instead of trying to sabotage government efforts to combat climate change.

Thanks to planned coal plant retirements, mandatory renewable and energy efficiency standards, and other measures such as regional carbon emissions caps, 31 states are more than half way toward achieving the proposed Clean Power Plan's 2020 interim carbon reduction benchmarks, according to a June UCS analysis. Although the Obama administration reportedly will give states until 2022 to meet those interim goals, UCS's findings demonstrate that the plan's timeline and trajectory are not only workable, but also could be much more aggressive.

"Opponents of the Clean Power Plan have claimed that the emissions reduction requirements go too far too fast, and are therefore not achievable," said UCS President Ken Kimmell, former head of the Massachusetts Department of the Environment. "Our research shows this Chicken Little forecast is unfounded."

Surprisingly, six of the states that were party to last year's dismissed lawsuit against the proposed EPA rule are well along the way to surpassing their 2020 benchmarks. Indiana, Kentucky and Ohio—which were assigned modest goals due to their heavy dependence on coal—are on pace to meet them, while Alabama, South Carolina and Wisconsin are more than 50 percent of the way there. Regardless, Indiana Gov. Mike Pence and Wisconsin Gov. Scott Walker have announced that their states will not comply with the rule without significant changes that would roll back state emission reduction targets. (The other governors who have said no to the plan include Phil Bryant in Mississippi, Mary Fallin in Oklahoma, Bobby Jindal in Louisiana, and Earl Ray Tomblin in West Virginia).

"It defies logic and reason that states already demonstrating their ability to make significant cuts in carbon emissions would sue the agency claiming undue hardship," said UCS energy analyst Jeremy Richardson, a co-author of the organization's recent analysis of potential state compliance. "These six states are doing a great job proving the EPA's case—that states can meet these new standards affordably and reliably given they already have commitments in place to help them do so."

The U.S. can meet the Clean Power Plan's overarching emissions reduction goal of 30 percent below 2005 levels by 2030, Richardson pointed out, because 29 states have renewable electricity standards, 24 states have energy efficiency standards, and there are plans to close at least 295 coal generating units by 2020. That amounts to more than 10 percent of total U.S. coal-fired electricity generation and roughly 13 percent of the current U.S. coal power plant fleet.

"As of next week, the country will have a roadmap for reducing power sector carbon emissions," Richardson said. "If states stay the course and continue to develop their renewable energy potential, cut their energy use, and even join forces with their neighboring states in regional cap and trade compacts, they should have no trouble meeting their 2030 goals."